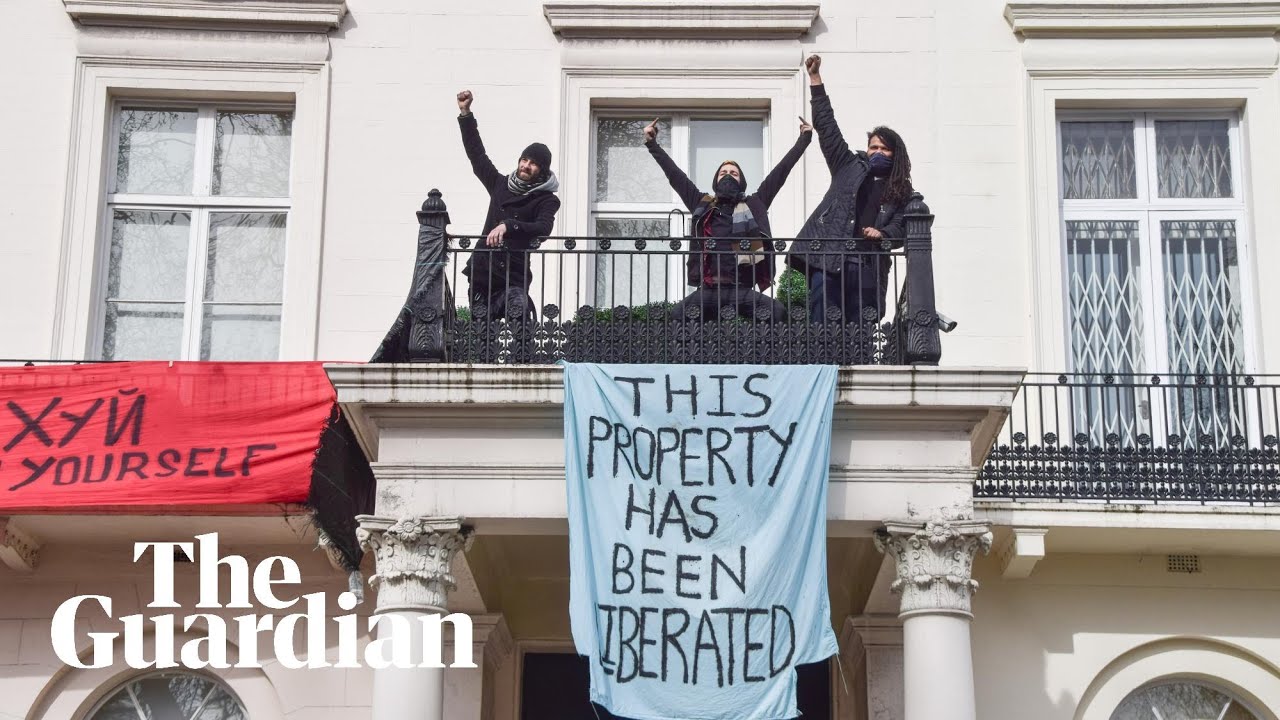 The four protesters who occupied the home of a Russian oligarch in London’s Belgravia have ended their demonstration and have been arrested by police.

The squatters, who said they were opposed to Vladimir Putin and Russia’s invasion of Ukraine and wanted to open the mansion up for Ukrainian refugees, got into the property owned by Oleg Deripaska around 1am on Monday morning.

Dozens of police including officers from the Territorial Support Group and a climbing team spent hours trying to persuade them to come down from a balcony at the front of the building.

The group refused police negotiators’ repeated attempts to “collect” them from the balcony using a crane, saying that they wanted to be treated in the same way as the prime minister. Referencing the “partygate” inquiry, they said they wanted to be sent a questionnaire to ascertain whether they had done anything wrong rather than being arrested.

But on Monday evening they left the balcony.

A spokesperson for Westminster police said: “The four people protesting on the balcony of a building in Belgrave Square have come down and been arrested. A police presence will remain at the scene.”

The street had earlier been cordoned off and at least 10 police vehicles and dozens of officers were on the scene.

Speaking to the PA news agency over the phone during the afternoon, one of the protesters, who refused to give his name but said he was from Lithuania, said: “All our group made peace with arrest because this was always one of the options. I’m ready to take the consequences for something I believe.”

The protesters said they felt their countries were also under threat from Putin. They said they wanted to open up the mansion – which they said “has too many rooms to count”, including a cinema and a wine cellar – to Ukrainians fleeing the war, along with other refugees needing shelter.

In a message to Russian oligarchs, the squatters said: “You occupy Ukraine, we occupy you.”

This part of London has been nicknamed “oligarchs’ quarter” because so many wealthy Russians have bought properties in the area, a stone’s throw from Buckingham Palace.

Earlier, the mayor of London, Sadiq Khan, called on the government to take action and use Russian oligarchs’ empty residences to house Ukrainian refugees.

He said he was “surprised” by the police response to the squatters.

“I’m unclear what the police were responding to because we know no one’s living there,” he told LBC’s Tonight With Andrew Marr programme.

“But I’m not sure if there were concerns about any crimes being done to any neighbouring properties, so those are the questions.”

Khan said that he was likely to bring up the police response with the Metropolitan police hierarchy.

He added: “One of my concerns is, we’ve had a number of weeks now to seize those homes, to allow them to be used by refugees. They haven’t.

“I don’t condone the actions of the squatters but they’ve decided to take the law into their own hands.”

Deripaska is an aluminium magnate. He has called on Putin to make peace with Ukraine. He was among seven Russian oligarchs put under UK government sanctions last week. 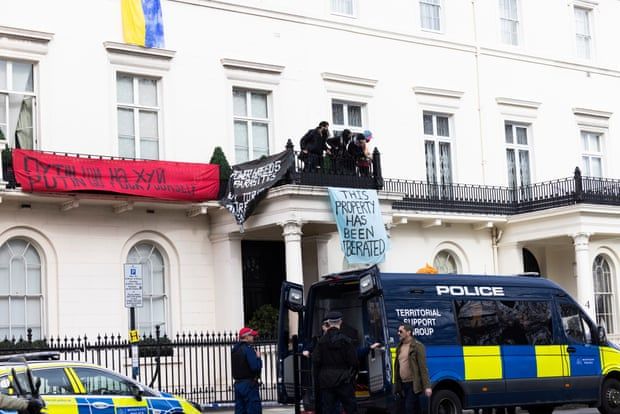 Police at the scene in Belgravia.

The squatters also criticised UK banks and parts of the establishment that they say have allowed oligarchs to launder their billions in London.

They declined to say how they got into Deripaska’s property but said “it required climbing skills” and “squatters’ magic”.

“This is not ordinary squatting, this is property liberation,” one of the squatters said. In a statement sent to the Guardian, the squatters said the invasion of Ukraine was the latest in a long line of human rights abuses by Putin’s government, including the bombing of Syria and mistreatment of LGBT people.

“This mansion will serve as a centre for refugee support for Ukrainians and people of all nations and ethnicities,” they said.

The squatters said they were invoking the spirit of Nestor Makhno, a Ukrainian anarchist revolutionary. They said they would not leave the property willingly and planned to barricade themselves in if police or bailiffs tried to remove them.

Before the group were arrested, a Metropolitan police spokesperson said: “Police were called shortly after 01:00hrs on Monday 14 March to a residential property in Belgrave Square, SW1. Officers attended and found that a number of people had gained entry and hung banners from upstairs windows. Officers remain at the location.”

This is not the first time squatters have occupied an oligarch’s London mansion. In 2017 a group occupied the mansion of Andrey Goncharenko in nearby Eaton Square, which they said they wanted to open as a homeless shelter. Goncharenko is not currently under UK government sanctions.