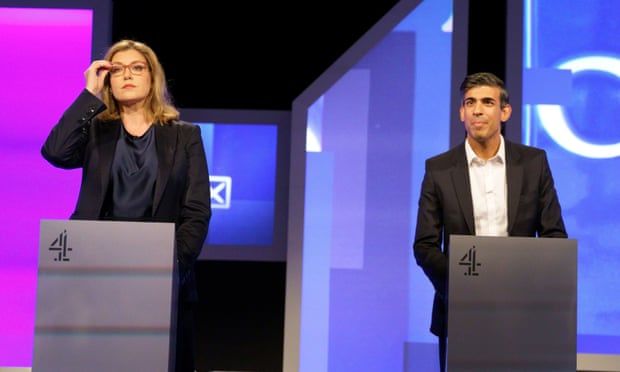 The five candidates still standing for the leadership of the Conservative party were in action in a TV debate broadcast on Channel 4 on Friday night. Here are the five key takeaways:

Tom Tugendhat was the only one able to answer freely

Given the opportunity to answer “Yes” or “No” to the question “is Boris Johnson honest?”, Tom Tugendhat was the only person able to do it. He got warm applause for simply saying: “No”.

Kemi Badenoch came closest, saying “Sometimes”. Rishi Sunak, Penny Mordaunt and Liz Truss all refused to be drawn into the one word answer, and prevaricated.

Τugendhat essentially played the role of the minority party candidate in a multiparty debate, free to just speak his mind, call out the hypocrisy in everybody else, all the while safe in the knowledge there’s virtually zero chance he will end up elected.

Truss has a delivery mantra problem

Truss tried to focus again and again about delivery in every department, saying that her trade deals with Australia and Japan had been considered impossible, and that she had stood up to Vladimir Putin. But it all felt heavily scripted from her.

Badenoch and Tugendhat felt more off the cuff, and Sunak was a more fluid performer here than he has been on the radio over the last 48 hours. Truss felt rigid and dogmatic.

In a crucial exchange that was mostly Sunak v Truss, the foreign secretary told the former chancellor that Covid was a once-in-a-century occurrence, and that the government should look accordingly at paying it back over a longer term. Sunak was clear, saying: “The best way for people to have money in their pocket is to get a grip of inflation.”

Again and again during the debate he demonstrated a better command of the numbers and Treasury brief, but you still ended up with the feeling that a man instinctively fiscally conservative is being pushed into a corner and portrayed as a leftist for not wanting to cut taxes

Trans rights questions are not going away for Mordaunt

The culture warriors in the Conservatives have identified the question of trans rights as a wedge issue they can use against Labour, but Mordaunt’s apparent different standpoints over the years have made it awkward for her too.

The trade minister claimed to be baffled that anybody found her position unclear. It may not be high up the agenda when you poll voters on what they care about, but expect to see this get asked of the women standing to be PM again and again.

Applause was sporadic, and mostly directed either at Tugendhat, or when Sunak was singing the praises of an NHS worker who had asked a question. At the end Krishnan Guru-Murthy asked for a show of hands of the floating voters in the audience who had been persuaded to be more likely to vote Conservative. Ten hands went up at most.

It wasn’t a feral BBC Question Time audience, but at times, particularly when issues around trust and Partygate were being touched upon, the disdain for the audience with politicians was palpable. Whoever wins out of this contest in the end, they have an uphill climb.