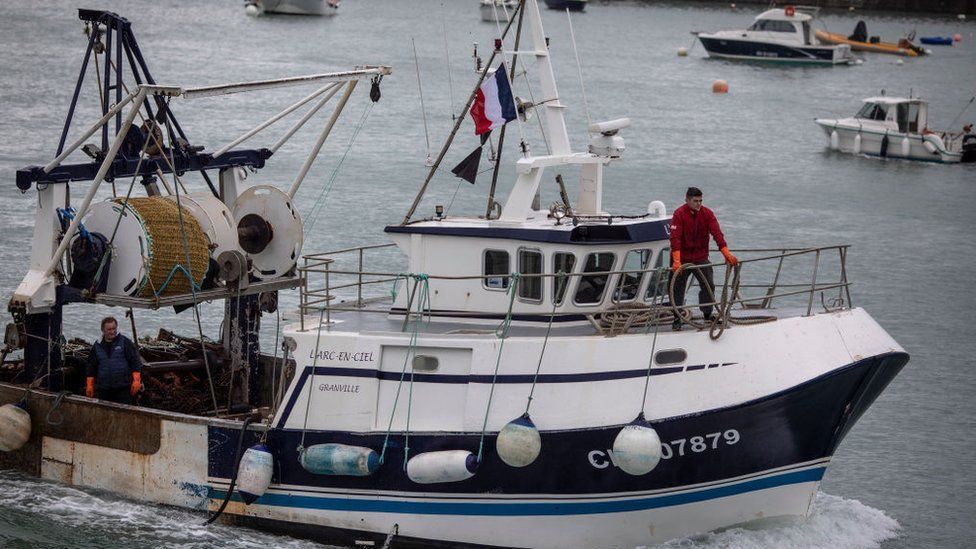 France said if there is no agreement by 2 November it will also tighten checks on UK boats and trucks, and could target Channel Island energy supplies.

He said the UK was seeking "urgent clarification" of France's plans.

France was angered by a decision from the UK and Jersey last month to deny fishing licences to dozens of French boats, and argued that it breached the Brexit deal.

On Wednesday evening, it issued its ultimatum, saying it would begin to impose "targeted measures" from Tuesday of next week, including:


* Increasing checks on trucks going to and from the UK

France said it was also preparing further sanctions, which could include cutting electricity supplies to Jersey, as it previously threatened in May.

"The French state will continue to support its fisheries industry," the government said, adding that it expects answers from the UK "in the next few days".

Brexit minister Lord Frost said: "It is very disappointing that France has felt it necessary to make threats late this evening against the UK fishing industry and seemingly traders more broadly.

"As we have had no formal communication from the French government on this matter we will be seeking urgent clarification of their plans. We will consider what further action is necessary in that light."

Downing Street said the "disappointing and disproportionate" threat of sanctions was "not what we would expect from a close ally and partner".

"The measures being threatened do not appear to be compatible with the Trade and Co-operation Agreement and wider international law, and, if carried through, will be met with an appropriate and calibrated response," a spokeswoman said.

She said that the UK will raise concerns with both the EU and French government, arguing that it had granted 98% of licence applications from European boats.

The UK maintains the rejected applications which sparked the row did not have enough supporting evidence to show they had a history of fishing in Britain's or Jersey's waters.