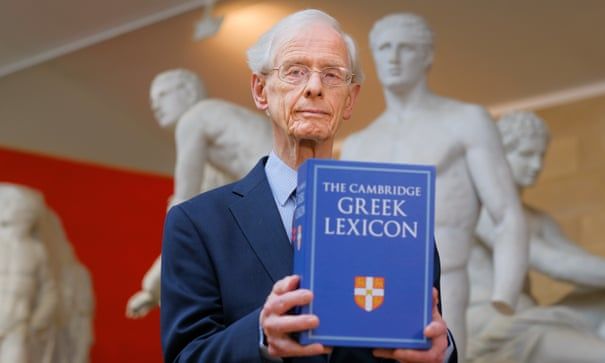 Words the most recent Greek lexicon translated as ‘to wench’ or ‘do one’s need’ have been given much earthier new readings for modern students of classics
Victorian attempts to veil the meanings of crude ancient Greek words are set to be brushed away by a new dictionary 23 years in the making. It is the first to take a fresh look at the language in almost 200 years and promises to “spare no blushes” for today’s classics students.

The late scholar John Chadwick first came up with the idea to update HG Liddell and Robert Scott’s 1889 dictionary, the Intermediate Greek-English Lexicon, in 1997. An abridged version of a lexicon published in 1843, the Liddell and Scott had never been revised, and is packed with antiquated terms and modestly Victorian translations of the more colourful ancient Greek words. Despite this, it remains the most commonly used reference work for students in English schools and universities.

It was initially thought that Chadwick’s project would take five years, but Cambridge professor James Diggle, who was then chair of the advisory committee, said it soon became clear that the Intermediate Lexicon was “too antiquated in concept, design and content”, and the team would need to start afresh.

Diggle and his fellow editors then set out on the “Herculean task” of rereading most examples of ancient Greek literature, from Homer to the early second century AD. They then worked through the 24 letters of the Greek alphabet to create a modern guide for today’s students to the meanings of ancient Greek words and their development through the years. The lexicon is the first to be based on an entirely new reading of the Greek texts since 1843.

“At the outset of the project I undertook to read everything which the editors wrote. I soon realised that if we were ever to finish I had better start to write entries myself,” said Diggle.

“The moment of greatest relief and joy was when I was able to sign off the final proofs and say to the publisher, ‘It’s finished. You can print it.’ You can’t imagine what it was like, to realise that we had finally got there. I literally wept with joy.”

The completed Cambridge Greek Lexicon, which is being published by Cambridge University Press, runs to two volumes and features around 37,000 Greek words, drawn from 90 authors and set out across 1,500 pages.

Antiquated and offensive language also gets a makeover. While Liddell and Scott defined βλαύτη (blaute) as “a kind of slipper worn by fops”, in the Cambridge Greek Lexicon it is described as “a kind of simple footwear, slipper”; κροκωτός (krokotos) is no longer defined as “a saffron-coloured robe worn by gay women”, but as a “saffron gown (worn by women)”.

“Liddell and Scott could have claimed, in the words of Edward Gibbon, ‘My English is chaste, and all licentious passages are left in the obscurity of a learned language,’” Diggle said. “We use contemporary English.”

The Cambridge Greek Lexicon also begins each entry with the rootmeaning of a word, a fundamentally different approach to the 19th-century lexicon, which started entries with a word’s earliest appearance in literature. “Take a word like πόλις, which will be familiar to many in its English form ‘polis’,” said Diggle. “Our article shows the variety of senses which the word can have: in its earliest usage ‘citadel, acropolis’; then, more generally, ‘city, town’ and also ‘territory, land’; and, more specifically, in the classical period, ‘city as a political entity, city-state’; also, with reference to the occupants of a city, ‘community, citizen body’.”

Professor Robin Osborne, chair of Cambridge’s classics faculty, said the department invested in the new lexicon in order to “make a contribution to the teaching of Greek over the next century”.

“This puts into the hands of students a resource that will enable them access to ancient Greek more securely and easily,” said Osborne. “It is hugely important that we continue to engage with the literature of ancient Greece, not as texts frozen in a past world, but which engage with the world in which we live.”

The Lexicon’s publisher at Cambridge University Press, Michael Sharp, said it was “one of the most important classics books we have ever published”, and “a milestone in the history of classics”.

Diggle, however, said he had no plans for further lexicographical ventures. “No, no, no, no, no,” he said. “I finished it with an enormous sense of relief and joy – for the last 15 years of it I did nothing else, it really dominated my life.”
Add Comment