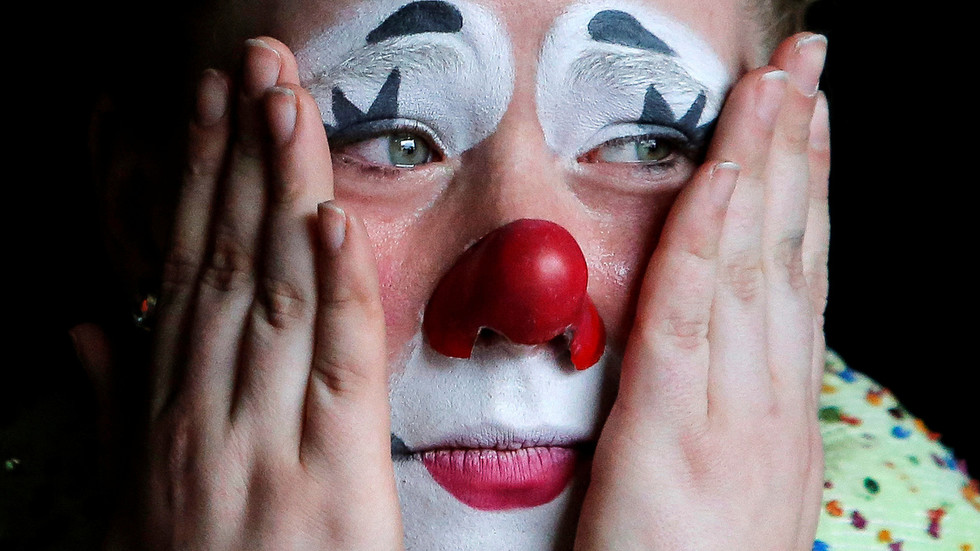 ‘Finally, something the PM can help with’: Post-Covid CLOWN SHORTAGE hits Northern Ireland

Alongside the UK’s ongoing fuel crisis, there’s a clown shortage in Northern Ireland’s circuses. With circus bosses searching for new clowns, some commenters suggested they look to the political arena for recruits.

Circuses will soon tour Northern Ireland again once Covid-19 restrictions are lifted, but according to the BBC, they’re facing an acute shortage of clowns. Many of these funnymen (and women), circus owner David Duffy explained, either returned to their own countries at the outset of the pandemic last year, or have since gone abroad to look for work in countries that have already reopened.

With the visa process for non-EU clowns a complicated one, Duffy told the BBC’s Good Morning Ulster show that he’s “trying to reach out for any of our folks at home who feel that they can give it a go.”

Aspiring clowns will need to do more than just daub themselves in makeup and lob custard pies to fill the oversized shoes of their profession. “When you go into the circus ring and you’ve got 700 to 800 people looking at you, no matter what sort of mood you’re in you have to light up that circus ring,” he explained. “You have to be able to read your audience, in a short couple of minutes you have to be able to get a rapport going with them and interact and feed off them.”

While Duffy is holding online auditions for wannabe clowns, commenters online suggested that he look to Westminster for inspiration.

And across the Atlantic, American readers suggested that a cohort of clowns be flown in from Washington DC.

While the jokes write themselves, the business of clowning is no laughing matter, performer ‘Silly Tilly’ told the BBC. “Not everybody likes to be laughed at but for someone who is a clown, your worst nightmare would be to not be laughed at,” she explained. “You have to be able to poke fun at yourself, it’s not about poking fun at other people.”

While the besuited clowns in Westminster and on Capitol Hill may be objects of fun for the rest of their citizens, they tend to take themselves terribly seriously, and many haven’t yet mastered the self-deprecation necessary for a career in clowning. Thankfully, these skills can be taught, and anyone looking to transition from politics to circus performance can avail of multiple clown colleges in the UK and Ireland.