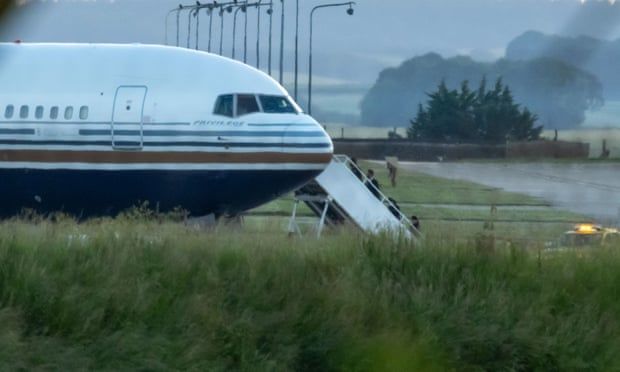 Exclusive: Women for Refugee Women says it is in touch with first woman considered for removal
A woman in immigration detention has been targeted for removal to Rwanda, a UK refugee charity has said.

Women for Refugee Women said it was in touch with a survivor of trafficking who was recently issued with a notice of intent that she was being considered for removal to Rwanda.

Charity workers say that instead of offering the woman protection and the chance to rebuild her life in the UK, the government is proposing to force her against her will to Rwanda.

The Guardian revealed on Sunday that the Home Office was planning a second flight to Rwanda after the first plane, which was due to take off for the country’s capital, Kigali, was grounded on 14 June following an 11th-hour intervention by the European court of human rights.

While the Home Office has not ruled out sending women and children to Rwanda alongside men, this is the first time a woman is thought to have been issued with a notice of intent. Those earmarked for the first flight were all male.

It is understood dozens of male asylum seekers placed in immigration detention after their recent arrivals to the UK in small boats or lorries have also been issued with notices of intent for the second flight to Rwanda.

Since December, an increasing number of women who have recently arrived in the UK after crossing the Channel by boat are being detained upon arrival and sent to Derwentside immigration detention centre in County Durham. Previously it was not Home Office practice to detain female asylum seekers on arrival in the UK.

The Home Office began detaining women at the 84-bed centre on 28 December 2021. There are about 40 women held there.

Women for Refugee Women has expressed particular concern about the Home Office’s decision to target women for removal to Rwanda before a legal challenge the charity launched in the high court against the home secretary, Priti Patel, has been concluded.

The legal action focuses on the government’s failure to provide in-person legal advice to women in Derwentside. Other immigration detention centres do make this provision. During the court case counsel for Patel said three new legal aid contracts for Derwentside were being awarded. Judgment in the case is awaited.

In a further sign that the Home Office may want to act ahead of decisions of the courts it is understood that the second planned flight to Rwanda is scheduled to take place before the full hearing of the high court challenge by Detention Action and Care4Calais, along with some asylum seekers threatened with forced removal to Rwanda, has been heard. The case focuses on whether or not the new policy of outsourcing asylum seekers to Rwanda for their claims to be processed is lawful. It takes place on 19 July.

Andrea Vukovic, deputy director at Women for Refugee Women said: “The news we have received confirms that this government’s cruelty towards people seeking protection has no end.

“We know that the majority of women in detention are already survivors of ​gender-based violence, including rape, and many of them will have been trafficked to the UK. Threatening their removal to Rwanda exposes them to further risk of violence and harm and is unthinkably cruel.”

Emma Ginn, the director at the charity Medical Justice, said: “We have had 40 clients in detention who have a notice of intent to remove them to Rwanda. The vast majority of them are torture and trafficking survivors and the Home Office knows it.

“The fact that they are even held in immigration detention at all demonstrates the ineffectiveness of the Home Office’s screening for vulnerabilities. They should definitely not be removed to Rwanda.”

A Home Office spokesperson said:“Our world-leading partnership with Rwanda is a key part of our strategy to overhaul the broken asylum system and break the evil people-smugglers’ business model. Nobody will be relocated if it is unsafe or inappropriate for them. Victims of trafficking and modern slavery will have a chance to seek support via the national referral mechanism, and all individuals in immigration removal centres have access to the legal support they need.”
#Priti Patel
Add Comment