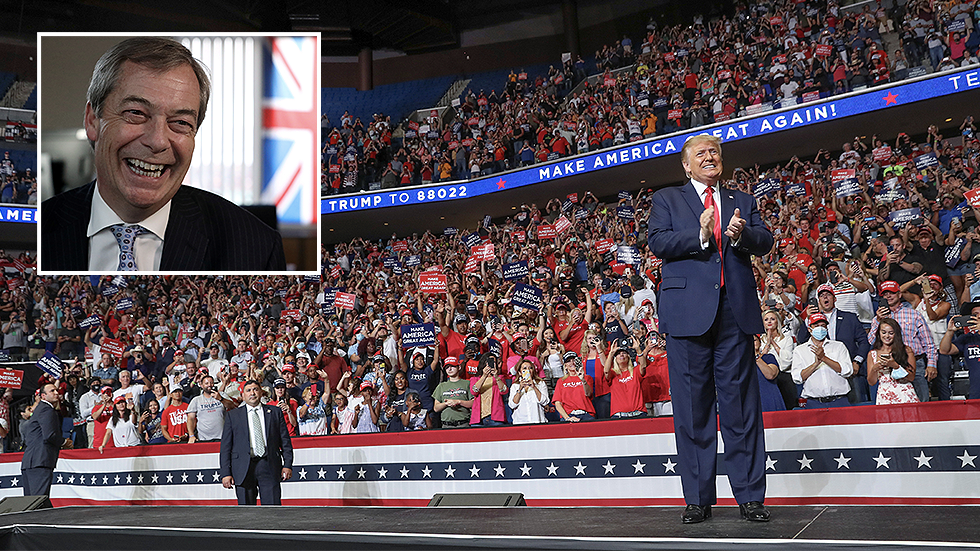 A US congressman who chairs the Committee on Homeland Security has launched an investigation into Nigel Farage after the Brexit Party leader apparently flew to America to attend a Donald Trump rally during the Covid-19 pandemic.

US Democrat representative Bennie G Thompson sent a letter to Chad Wolf, the acting secretary of Homeland Security, on Monday, requesting “all relevant documents” on the decision to “waive the travel ban for Mr Farage,” saying it raised “troubling questions” at a time of strict restrictions being enforced.

Thompson highlighted media reports that Farage had initially been “denied boarding while trying to fly from the UK to the US on Friday,” but was subsequently given the green light by the Trump administration to make the trip.

The Brexit Party leader tweeted a photo of himself on Saturday looking very cheery, with the caption: “In the USA, only twenty four hours from Tulsa” – the location of the US president’s rally over the weekend. Images later emerged on Saturday night appearing to show the 56-year-old backstage at the ‘Team Trump on Tour’ as part of the rally.

In the USA, only twenty four hours from Tulsa. pic.twitter.com/9fQipWYr3a

Nigel Farage backstage at the “Team Trump on Tour” part of the rally, a series of panel discussions for the crowd outside pic.twitter.com/OvnRscaEuQ

The US has barred entry to arrivals from the UK, with exemptions given to US citizens, their family members and “individuals who meet specified exceptions.”

According to the congressman, America’s Customs and Border Protection (CBP) has provided a statement to his staff, saying the Department of Homeland Security conducted a review and concluded that Farage’s travel was “permissible” as his entry to the US “would be in the national interest,” and so he was allowed to board the flight.

In his letter to Wolf, the Mississippi Democrat also requested that the Department of Homeland Security provide “all communication” since March 14 relating to Farage’s trip and documents regarding the “determination and justification” that his entry was indeed in the “national interest.”