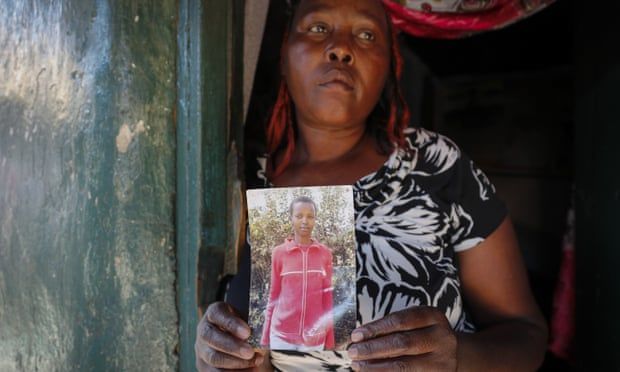 The body of Agnes Wanjiru, 21, was found in 2012 after she reportedly went out partying with British soldiers at the Lions Court hotel in the central town of Nanyuki, where the UK army has a permanent garrison.

The Sunday Times reported last month that a British soldier had confessed to killing Wanjiru and showed comrades where he had dumped her body in a septic tank behind the hotel.

The report prompted Kenyan police to reopen the case amid fresh calls for an investigation to secure justice for Wanjiru.

Wanjiru’s family have instructed the law firm Leigh Day to challenge the Ministry of Defence over what it says is a failure to investigate her alleged murder.

Partner Tessa Gregory told Agence-France Presse: “Our client desperately wants justice for Agnes but also wants answers as to what the British army knew and why it is that over the last nine years the Ministry of Defence appear to have done nothing to address the known allegations Agnes was brutally murdered at the hands of a British soldier.”

A spokesperson for the MoD said: “The jurisdiction for this investigation rests with the Kenyan police, who we continue to work closely with on a daily basis to provide all possible support.

“This remains an active investigation with multiple lines of inquiry. In order to protect the investigation, and in the interests of justice, we cannot comment further.”

Wanjiru was last seen one evening in March 2012 with a British soldier from the military base and her body was found about two months later.

Rose Wanyua, Wanjiru’s eldest sister, told the Guardian: “It’s painful, very painful. Shiru did not deserve to die the way she did. We will never forget her.”

Wanyua disputes the assumption that her sister met the soldiers while looking for clients as a sex worker. “A friend told my sister that there was some ‘quick money’ to be made that evening if only Wanjiru joined her in entertaining the Johnnies in town. She was a hair stylist who used to make my daughters’ hair, never the prostitute as many would like the world to believe,” she said.

The UK high commissioner to Kenya, Jane Marriott, last month expressed “outrage and concern” over Wanjiru’s death and promised high-level support for a Kenyan investigation into her murder.

Noordin Haji, Kenya’s director of public prosecutions, has said the government would request the soldier’s extradition to face murder charges in Kenya.

Since Kenya gained independence in 1963, the British Army Training Unit Kenya (BATUK) on the outskirts of Nanyuki has been beset by controversies and allegations of offences, although some see it as bringing benefits, both to the local economy and to the society through the soldiers’ development work.
Add Comment