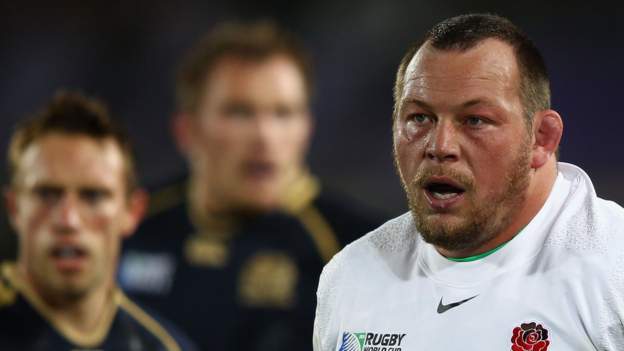 Rugby World Cup winner Steve Thompson and seven other former players claim the sport has left them with permanent brain damage - and are in the process of starting a claim against the game's authorities for negligence.

Every member of the group has recently been diagnosed with the early signs of dementia, and they say repeated blows to the head are to blame.

Thompson, 42, played in every England match when they won the 2003 World Cup, but says: "I can't remember any of those games. It's frightening."

It is understood a letter of claim, amounting to millions of pounds in damages, will be sent next week to the governing bodies for English and Welsh rugby and World Rugby - and a group class action could follow.

It is the first legal move of its kind in world rugby and, if successful, could force change to the way the game is played.

Lawyers for the group suggest another 80 former players between the ages of 25 and 55 are showing symptoms and have serious concerns.

The Rugby Football Union (RFU), which runs the sport in England, said: "The RFU has had no legal approach on this matter. The Union takes player safety very seriously and implements injury prevention and injury treatment strategies based on the latest research and evidence.

"The Union has played an instrumental role in establishing injury surveillance, concussion education and assessment, collaborating on research as well as supporting law changes and law application to ensure proactive management of player welfare."

The Welsh Rugby Union has also been approached for a response.

Former hooker Thompson played 195 times for Northampton Saints before moving to France to play for Brive. He won 73 England caps, and three for the British and Irish Lions, in a nine-year international career.

He first retired in 2007 because of a serious neck injury but was given the all-clear to return, before being forced to retire again in December 2011 with the same problem.

Thompson, former England team-mate Michael Lipman, ex-Wales international Alix Popham and five other retired players are the first group to agree to - and have - testing.

Thompson says his condition is so progressed he cannot remember anything that happened in those 2003 World Cup games.

"It's like I'm watching the game with England playing and I can see me there - but I wasn't there, because it's not me," he said.

Thompson is convinced constant head knocks during matches and training are to blame.

"When we first started going full-time in the mid-1990s, training sessions could quickly turn into full contact," he said.

"There was one session when the scrummaging hadn't gone quite right and they made us do a hundred live scrums. When it comes to it, we were like a bit of meat, really.

"The whole point of us doing this is to look after the young players coming through. I don't want rugby to stop. It's been able to give us so much, but we just want to make it safer. It can finish so quickly, and suddenly you've got your whole life in front of you."

Thompson, who has four children, is frank about his fears for the future and open about some dark thoughts.

"When you are there alone, the number of times you just think to yourself it's probably easier if you go, if I'm not here," he said.

"You start to think, it's not right to put them through that. That's the difficult side to it."

What is CTE & how can it be diagnosed?

All eight players to have come forward so far have been diagnosed by neurologists at King's College, London, with early onset dementia and probable Chronic Traumatic Encephalopathy (CTE).

CTE can develop when the brain is subjected to numerous small blows or rapid movements - sometimes known as sub-concussions - and is associated with symptoms such as memory loss, depression and progressive dementia.

The disease can only be diagnosed in a brain after death, but some experts believe if history of exposure is evaluated, it is reasonable to conclude that the risk increases. The embryonic nature of the science around the issue could play a key part in the success or failure of the overall case.

It has been found in the brains of dozens of former NFL players, as well as a handful of deceased footballers, including former West Bromwich Albion and England player Jeff Astle. A re-examination of his brain in 2014 found he had died from CTE.

Sub-concussions cannot be detected on the pitch or in any post-match examination.

Dr Ann McKee, from Boston University, is the leading neurologist in CTE and was instrumental in bringing about change in the NFL.

She and others have faced scepticism within sport, from those who believe more research is needed before further changes are introduced.

"There's clearly a problem," she told the BBC.

"We don't know the magnitude of the problem, but as long as we insist that there is no problem, we'll never get to the bottom of it.

"We're just denying it and prolonging it and making sure that as many rugby players as possible get CTE."

So how could the claim be proved?

If the case progresses to court, the group must prove the governing bodies have been guilty of negligence.

Richard Boardman, from law firm Rylands, is leading the action.

"We are now in a position where we believe the governing bodies across the rugby world are liable for failing to adequately protect their players on this particular issue," he said.

"Depending on how many people come forward, the case could be worth tens of millions, maybe even hundreds of millions.

"Right now we're representing over 100 former players but we expect many more to get in contact."

Dr Willie Stewart, who with his team at Glasgow University has been leading research around dementia in football, is confident there is an issue in rugby union.

"There is no question if you look at the data across all the sports in all the regions whether they be football, rugby, American football, I've looked at brains from people from all these different sports.

"The difficulty we have is gathering enough experience from former rugby players to be able to say with certainty, but I think you would be foolish to ignore it. "

The issue of concussion in sport has been debated extensively over the past few years. The links between heading a football and degenerative brain disease have even forced rule changes at youth level.

In England, Scotland and Northern Ireland, children aged 11 and under are no longer allowed to head the ball in training. There are also limits to heading frequency at higher age group levels.

At senior level, former professionals have called for more research and better player welfare after the recent death of England World Cup winner Nobby Stiles, and following the news that Stiles' 1966 team-mate and Manchester United legend Sir Bobby Charlton is suffering from the disease.