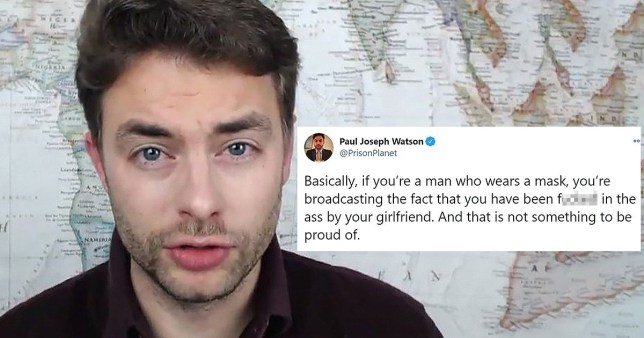 A former minister has told an anti-masker to try being ‘f***ed in the ass by his girlfriend’.

Edwina Currie, who had an affair with former Prime Minister John Major, was responding to a tweet by far-right YouTuber Paul Joseph Watson, who claimed men who wear masks are ‘broadcasting the fact that you have been f***ed in the ass by your girlfriend’.

Ms Currie, 74, wrote: ‘Idiot. Try it, you might enjoy it’, sparking widespread amusement on social media as users referred to her four-year affair with Mr Major.

One reply depicted the front cover of Private Eye, with the pair smiling as Ms Currie points as says ‘Now its my turn to screw you!’ Others posted unverified pictures claiming to show conspiracy theorist Mr Watson wearing a mask.

The 38-year-old, who also rallies against lockdowns, had written earlier: ‘The closer you get to central London, the more people wear masks. Even outside. What does that say about people who live in central London?’

He went on: ‘Literally no man who proudly wears a mask has not also been f***ed in their own ass by their girlfriend (reluctantly on her part).

‘Basically, if you’re a man who wears a mask, you’re broadcasting the fact that you have been f***ed in the ass by your girlfriend. And that is not something to be proud of.’

But former health minister Ms Currie, who appeared on I’m a Celebrity in 2014, was unimpressed by the tweet, branding him an idiot and suggesting he should try being pegged.

Mr Watson replied ‘No thanks, Salmonella woman’, in reference to Ms Currie’s incorrect statement about the bacteria being in most of the egg production in the UK in December 1988, which led to her resignation.

Tonight she jokingly declined to write an opinion article about the Twitter spat, suggesting her tweet ‘speaks for itself’.

She revealed in her diaries that she had had a four-year affair with Mr Major between 1984 and 1988, while they were both married.