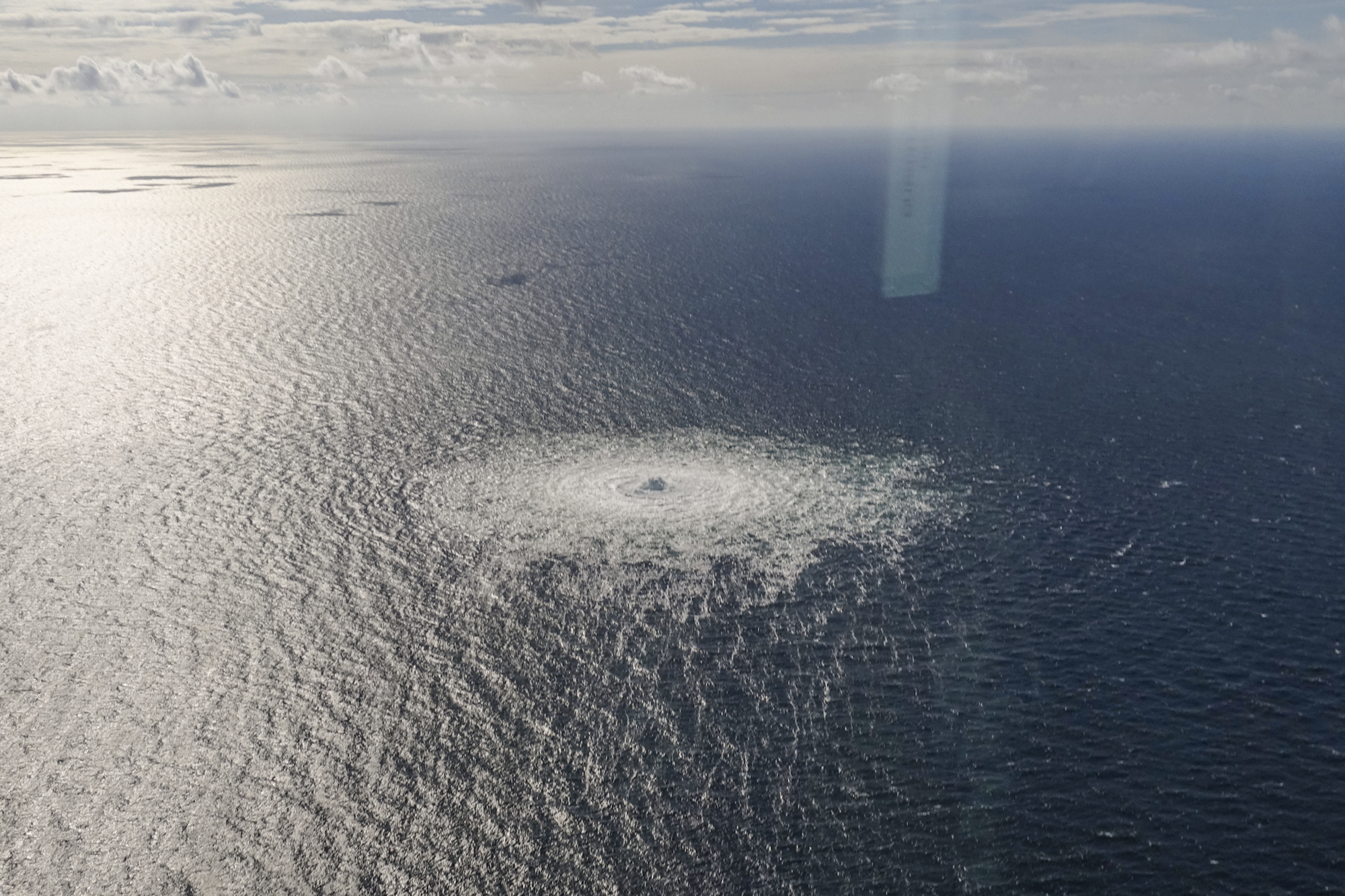 U.S. and European officials are increasingly pointing toward sabotage as the cause of two explosions that caused massive leaks from natural gas pipelines out of Russia — and gauging whether the incidents are a new warning from Moscow about the continent’s energy supplies heading into winter.

U.S. officials downplayed the potential for immediate impacts from the explosions in the Baltic Sea, even as gas prices rose in Europe and leaders there asked whether attacks on other critical fuel infrastructure could be coming. The leaks hit the Nord Stream I pipeline, which has been shut down completely since early September, and its planned twin Nord Stream II, which never went into service amid worries that it would worsen Europe’s dependence on Russian natural gas.

“Everybody should be on high alert,” Energy Secretary Jennifer Granholm said Wednesday while attending a conference in Vienna, Austria, according to Bloomberg. Asked whether that alert should include additional precautions for U.S. natural gas shipments to Europe, she said: “Of course.”

In a statement Wednesday, the Council of the European Union promised a “robust and united response” to the incidents, adding that “all available information indicates those leaks are the result of a deliberate act.”

The EU statement did not name a suspected culprit, but some others in Europe were less reticent in blaming Russia as the most likely cause of the pipeline ruptures, which created a massive methane leak under the Baltic Sea after being detected Monday.

“An unnoticed, conspiratorial damage to pipelines at a depth of 80 meters in the Baltic Sea requires sophisticated technical and organizational capabilities that clearly point to a state actor,” Gerhard Schindler, former president of the German Federal Intelligence Service, told the German media outlet Welt. “Only Russia can really be considered for this, especially since it stands to gain the most from this act of sabotage.”

Mykhailo Podolyak, an adviser to Ukrainian President Volodymyr Zelenskyy, has called the incidents “a terrorist attack planned by Russia.”

Other government officials and analysts said that while the investigation into the leaks continues, a major focus has to be the safety of other critical energy infrastructure in both the U.S. and Europe.

“Everyone is assessing the situation and taking it from the angle of, ‘If Russia was behind this, why?’” Olga Khakova, deputy director for European energy security at the Atlantic Council, said in an interview. She added: “Is this a threat to other infrastructure in Europe?’ And then, ‘What’s next?’”

The U.S. and Europe must continue coordination and ready sanctions against Russia in case it is found responsible, she said. The threat of a cyberattack on U.S. and European infrastructure that could disrupt water flows and treatment, gas delivery and electricity remains high, she said.

“We still don’t know 100 percent that Russia was responsible,” Khakova said. “But everything is pointing to Russia being behind this.”

Asked for comment Wednesday, the White House National Security Council pointed to a tweet from national security adviser Jake Sullivan, who said Tuesday that the U.S. “is supporting efforts to investigate and we will continue our work to safeguard Europe’s energy security.”

During a Tuesday news briefing, Secretary of State Antony Blinken downplayed the incident’s impacts on European energy supply. U.S. energy companies are shipping liquefied natural gas to Europe as part of an effort to make up for supply disruptions caused by Russia’s war on Ukraine, though that effort is hampered by limited capacity, and the U.S. is working with allies to ensure as much spare LNG as possible is heading to European shores.

“My understanding is the leaks will not have a significant impact on Europe’s energy resilience,” Blinken said. “We’re working to continue to surge LNG supplies to Europe in cooperation with global partners, including in the Indo-Pacific.”

Some energy security veterans said the motives behind the leaks are not hard to discern.

David Goldwyn, who ran the State Department’s energy program under former President Barack Obama, said it was “unequivocal” that Russia was behind the attack, noting it executed something similar on a gas pipeline in Turkmenistan in 2009.

Russia’s message is clear, Goldwyn added: “Prepare for a life without Russian gas. ... It’s a threat of a complete cut-off.”

The leak “definitely is putting additional things on the table” for an EU energy ministers’ summit scheduled for Friday, an EU official said, requesting anonymity to discuss sensitive information on the continent’s energy strategy.

The official said the EU already has significantly curbed its use of Russian gas, which has dropped to 9 percent of the bloc’s imports, down from 40 percent before the war. The EU has surpassed its gas storage goals for the winter, shifted energy consumption to off-peak hours and is regularly engaging gas suppliers.

That said, the official acknowledged, the leak has caused everyone to wonder “how low can we go in order to survive the winter?” And, the person said, the continent is weighing strategies for “the long game” on living without Russian gas.

“In a moment of crisis there already has been some very, very important pivoting from all corners,” the official said. “This is going to add another layer of resolution behind all of the actions that are already happening.”

What the disabling of the pipelines will mean for markets is still up in the air. The explosions bring the pipelines out of commission for the foreseeable future, removing what had been a potential source of natural gas into Europe upon its eventual restart. That makes it much more unlikely that global natural gas prices fall anytime soon, market analysts said.

European natural gas prices had fallen to almost $50 per million British thermal units earlier in the week, according to European analyst firm Rystad Energy — substantially lower than they had been in recent weeks but still eight times the price in the United States. But they have since started increasing again on the news of the damage to the Nord Stream pipelines.

“We cannot expect prices to drop any time soon — at least not until we see some form of improvement in supply,” Rystad vice president Emily McClain said in an analyst’s note.

Benchmark U.S. natural gas prices were up 3 percent as of Wednesday afternoon, though they are still down from last week amid worries about a slowing economy.

U.S. liquefied natural gas exporters are sending 60 percent of their cargoes into Europe to offset the loss of Russian gas to Germany and other countries. But export plants are already running as fast as they can, and Freeport LNG, one of the largest suppliers of natural gas into Europe, remains offline until at least November after suffering an explosion earlier this year.

With one less pipeline available to bring natural gas to western Europe, the region will depend even more on imported gas and cause prices for that commodity to rise, said Charlie Riedl, head of the trade association Center for Liquefied Natural Gas.

“It will clearly impact prices in Europe and further increase the global price of gas,” Riedl said in a text message. Trading companies “will likely flow all cargoes to Europe given the price.”

Oh ya 60 days ago
Russia does not need to damage the pipeline to stop the flow to Europe, they just shut the valve. On the other hand who is exporting huge amounts of gas to Europe? Oh ya the USA to the point that there will be a shortage in the US this winter thus driving up the price for American consumers. America was scared that Germany was going to fold this winter as they were freezing in the dark and start getting Russian gas again therefore not needed Americans overpriced gas. Follow the money folks.
View all comments (1)Add comment