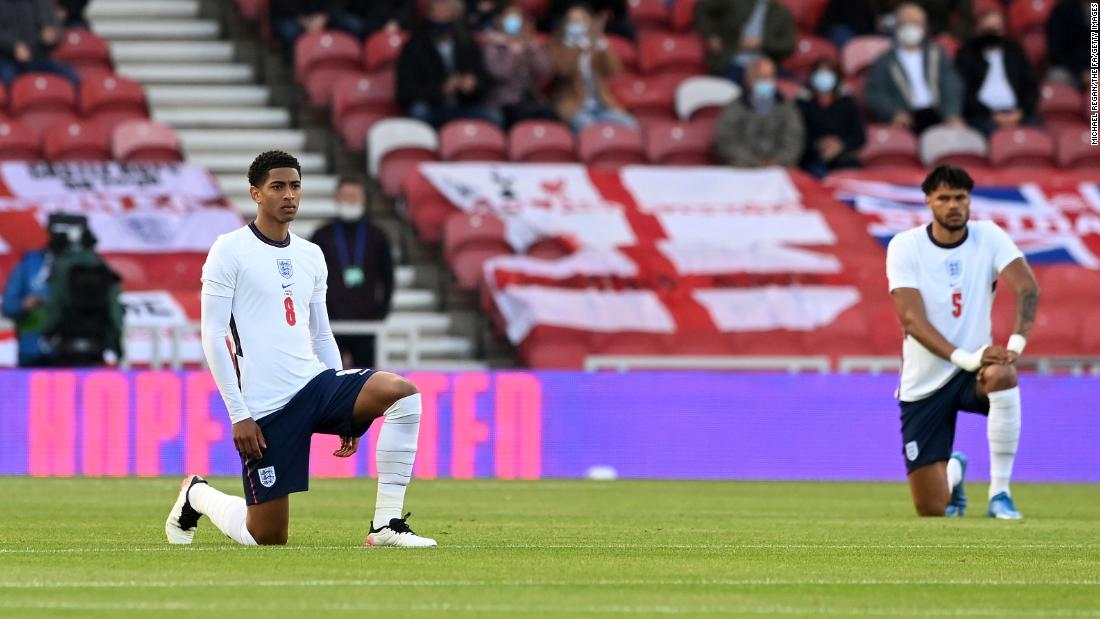 Twenty five years ago, when England hosted Euro 1996, the nation was in thrall to a team that reached the European Championship's semifinals playing an exciting brand of soccer to the soundtrack of fans singing "Football's Coming Home," the chorus to the "Three Lions" song.

Ahead of Euro 2020's start on June 11, England plays its final friendly in Middlesbrough on Sunday against Romania, but the mood music is more discordant.

As England players took the knee before kickoff in Wednesday's friendly against Austria -- a game also played in Middlesbrough -- the gesture was booed by some fans.

There were also boos ahead of the FA Cup final last month between Leicester City and Chelsea when players did the same. 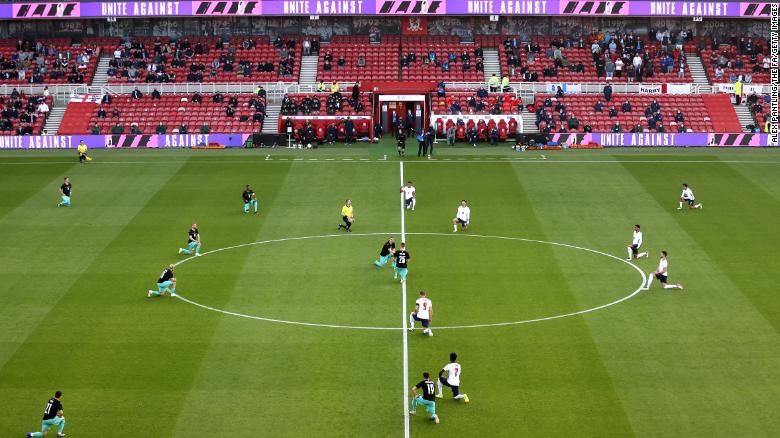 Players and officials take a knee ahead of the international friendly match between England and Austria at the Riverside Stadium on June 02, 2021 in Middlesbrough.

The act of kneeling -- made famous in 2016 by NFL quarterback Colin Kaepernick, who kneeled in protest of the national anthem -- was taken up by English Premier League footballers during the 2019/2020 season as an act of solidarity following the global outrage over the murder of George Floyd.

Last season, English top-flight players continued to kneel head of games, though Crystal Palace star Wilfried Zaha became the first Premier League player not to do so before kickoff, instead choosing to stand before his side's match against West Brom. Zaha said it was "becoming something we just do."

In March, former Arsenal and Barcelona star Thierry Henry told CNN Sport that the discourse over the issue has veered so far off course that people are now "forgetting" why players started kneeling in the first place.

"The cause is: what are you going to do for it to be better for everybody? Equality. Everybody, and obviously I'm going to talk about my community," Henry told CNN's Darren Lewis.

"This is not so much about kneeling or standing -- which, by the way, I thought kneeling was a strong, strong message and we all know where it comes from -- but then the discussion moved to: are we standing or are we kneeling?" 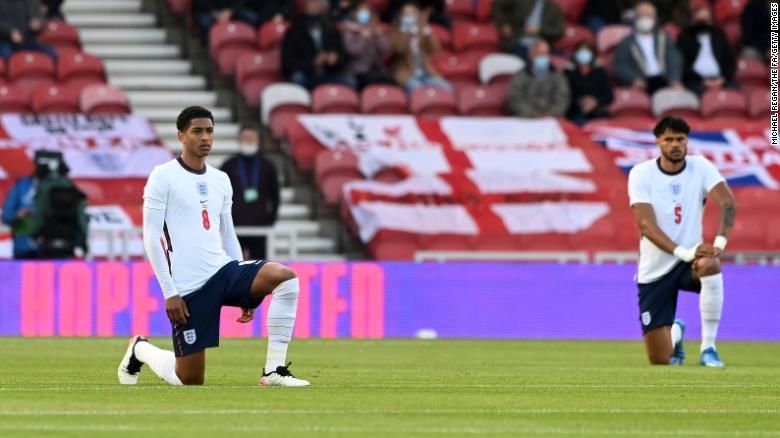 England players Jude Bellingham and Tyrone Mings of England take the knee ahead of the international friendly match against Austria at the Riverside Stadium on June 02, 2021 in Middlesbrough.

Asked if people were wearing "their racism more lightly" because of the kneeling, Tony Burnett, chief executive of football inclusivity organization Kick It Out told the Independent newspaper this week: "I don't think that's about taking the knee. I think this started when Brexit kicked off. The hatred, polarisation and binary positions people took up from then has carried on.

"Brexit became an excuse for racism to resurface in the UK and we are seeing that manifest in football now. I don't think players taking the knee have caused this, I think people taking the knee are trying to address it.

"What's caused this is government behaviour, government attitudes towards race, failure to tackle racism at a national level and allowing organisations and sports like football to get away with it for years."

Earlier this year a British government-backed report into institutional racism that found no evidence that the country is "still institutionally racist" was deemed a "whitewash" by racial equality advocates.

Commenting on the boos ahead of the Austria game, one Twitter user went even further.

"Based on what we are seeing from a small number of fans, England is going to be severely embarrassed in the Euros by the extreme racist element of our fans," he tweeted. "There is no hiding it, they proudly boo the recognition of equality. Difficult to believe."

Another Twitter user put forward a different viewpoint: "What if some people are booing because they are bored of virtue signalling and nothing actually being done about the issue. Having to see players take the knee when nothing more is happening, no changes being made, etc?" 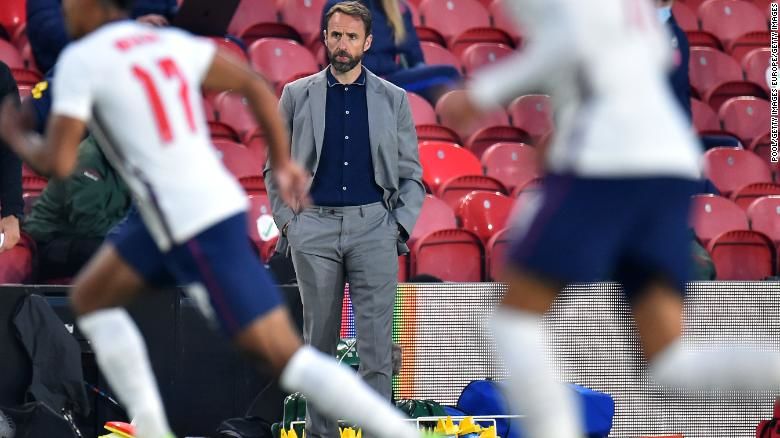 England manager Gareth Southgate looks on during the international friendly match against Austria.

On Saturday, England manager Gareth Southgate said his team will continue to take the knee before kickoff in all of their Euro 2020 matches.

"The most important thing for our players is to know we are totally united on it, we are totally committed to supporting each other," Southgate told reporters.

"We feel, more than ever, determined to take the knee through this tournament. We accept that there might be an adverse reaction, we are just going to ignore that and move forward.

"I think the players are sick of talking about the consequences of should they, shouldn't they. They've had enough really.

"Their voices have been heard loud and clear, they are making their stand but they want to talk about the football."

One member of the England's Euro 2020 squad -- Leeds midfielder Kalvin Phillips -- said he was "confused and disappointed" by the booing ahead of the Austria match.

"I don't think it's a great situation, especially for us players," said Phillips.

"The lads spoke about it afterwards and we came to the conclusion that no matter what happens around it we're still going to participate in kneeling, and I think that's a great idea."

One Conservative lawmaker Lee Anderson has said he will boycott England games over the players' decision to take the knee.

When England players duly did take a knee ahead of Sunday's friendly against Romania, booing was again heard at the Riverside Stadium, though other fans applauded the gesture.

As in Euro 1996, England's group games will be played at Wembley stadium. The team's first match is against Croatia on June 13 in front of a 22,000 crowd.

"It was a coming together of all kinds of things -- style, hope, politics, culture, commerce, sunshine, under the great brolly of international football."

What happens before kickoff of Sunday's friendly against Romania is likely to provide a glimpse of whether the mood surrounding England's Euro 2020 campaign will be similarly upbeat.