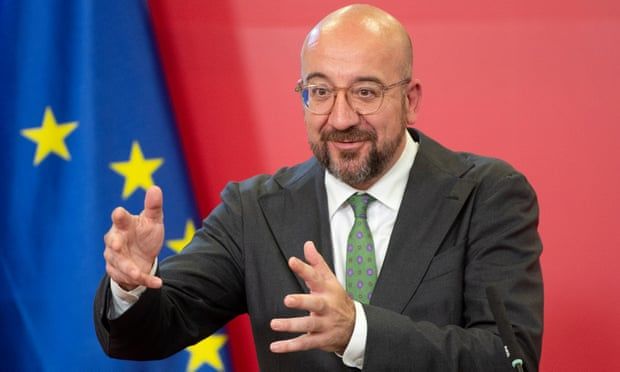 European leaders will head to Prague on 6 October to forge European Political Community
The EU will offer an olive branch to the new British prime minister with an invitation to a summit to discuss a new organisation uniting the democracies of the European continent.

Britain’s next prime minister, widely expected to be Liz Truss, will be invited to join fellow leaders across Europe at a summit in Prague on 6 October to forge a European Political Community, a body dedicated to advancing security across the continent.

Charles Michel, the president of the European Council, said he had no doubt the UK would be invited to the Czech capital despite “difficulties” over the Northern Ireland protocol.

Speaking in an interview with the Guardian and other European media, he said it was obvious the UK needed to be there. Michel said: “Even if we have discussions and difficulties on that [NI protocol] topic; in the broader perspective, there is no doubt that we are friends and that we need to continue to act together.”

Michel is a close political ally of the French president, Emmanuel Macron, who sketched out in May the idea of a European Political Community which would include all the democracies of the continent, including Ukraine and other aspirants to EU membership in the western Balkans.

If Truss is put into No 10 by Conservative party members, as widely predicted by opinion polls, her response to the invite will be an early sign of her stance towards Europe.

As foreign secretary, Truss made a speech on Britain’s allies that avoided mentioning the European Union. During the Tory leadership race, she caused astonishment and dismay among British diplomats when she said “the jury is still out” on whether Macron was a friend or foe of the UK.

Michel, a former Belgian prime minister, struck a similar tone to the French president, who has said he would not hesitate for a second to describe Britain as a friend. “The United Kingdom is a friend, a partner, a like-minded partner,” Michel said.

The invite to a gathering of European leaders on 6 October – immediately after the Tory party conference – contrasts with an earlier decision not to ask Boris Johnson to an EU summit that Joe Biden attended earlier this year.

While EU diplomats agree on Britain’s invitation to the gathering, the question of Turkey’s inclusion is more controversial. Greece and Cyprus, embroiled in long-running disputes with Ankara, oppose inviting Turkey, which remains an official candidate to join the EU although talks have been stalled for years. Michel said the EU should invite Turkey, but that he wanted to “make sure there is support from all colleagues”.

The rest of the guest-list is straightforward: there will be invites for Norway and Switzerland, non-EU countries deeply integrated into the single market, as well as nine countries hoping to join the EU, including Ukraine, Moldova, Georgia and six western Balkan states, plus non-candidates Armenia and Azerbaijan.

While there have been concerns the European Political Community could simply replicate existing pan-European bodies, such as the Organization for Security and Co-operation in Europe (OSCE), Michel suggested leaders wanted an informal and “very flexible” body, resembling the G7 or the G20.

The war in Ukraine has put security at the top of the agenda for the fledgling organisation, but Macron has also suggested the body could promote free movement for young people, as well as joint work on transport and energy.

The invite to the Prague summit does not signal any change from the EU to the contested Northern Ireland protocol. EU officials are pessimistic about an upturn in relations from either candidate vying to be prime minister, especially Truss, the architect of a bill to unilaterally override the protocol.

Michel, who is not involved in talks on the Northern Ireland protocol, said he expected the UK to uphold the agreement signed in 2019.

“I think there are so many difficult challenges in the world. We don’t need additional difficulties. Our position is very clear: we have got an agreement with the United Kingdom and we are confident that a great democracy will respect the international rule of law.”