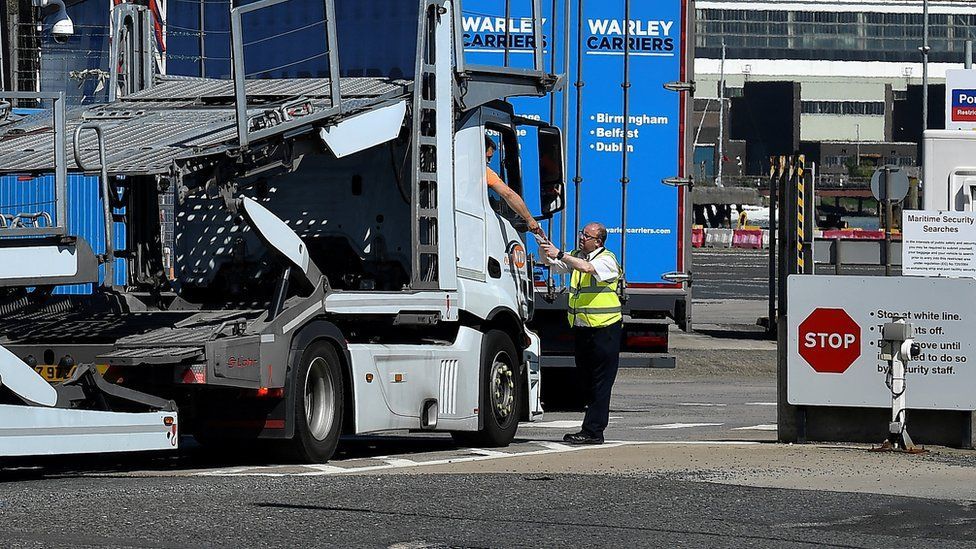 The EU has launched fresh legal action against the UK over its enforcement of post-Brexit trading rules in Northern Ireland.

It has accused the UK of failing to apply customs and tax rules it agreed as part of its 2019 exit agreement.

The arrangements have led to a bitter diplomatic row - with the UK now arguing they disrupt trade too much.

The UK government said the latest claims were "disappointing" and legal action was "in nobody's interest".

The latest legal claims come in addition to a separate challenge to the Northern Ireland Protocol Bill, which would allow the UK to scrap some of the border arrangements without the EU's say-so.

The bill passed its final stages in the House of Commons earlier this week, but faces a potentially rough ride in the Lords later this year.

The EU, opposition parties and some Tory MPs argue the bill goes against the deal the UK signed and breaches international law.

The border arrangements, known as the Northern Ireland Protocol, were designed to avoid checks at the UK's border with the Republic of Ireland.

However, they have become highly unpopular among unionists in Northern Ireland, with the UK government now arguing they are too disruptive.

The European Commission has now launched four additional legal actions over the protocol, with the UK given an initial two months to reply to the complaints.

They relate to an alleged failure to provide the EU with data about exports from Northern Ireland to Great Britain, and implement agreed EU customs, VAT and alcohol excise rules.

They come in addition to previous claims by the commission, alleging the UK had failed to properly share trade data and set up border inspection posts.

In a statement, the commission said its latest actions were required to "secure compliance" with the border arrangements that the UK had agreed to.

It added that in a "spirit of constructive cooperation," it had held off from the legal actions for over a year whilst talks with the UK over changing the protocol were ongoing.

But it added that UK's "unwillingness to engage in meaningful discussion since last February", as well as the bill to scrap parts of the protocol, "go directly against this spirit".

A UK government spokesperson said: "It is disappointing that the EU has chosen to bring forward further legal action, particularly on goods leaving Northern Ireland for Great Britain which self-evidently present no risk to the EU single market.

"A legal dispute is in nobody's interest and will not fix the problems facing the people and businesses of Northern Ireland. The EU is left no worse off as a result of the proposals we have made in the Northern Ireland Protocol Bill.

"We will review the EU's arguments and respond in due course."

There are a few reasons why the European Commission has decided to launch these four further claims now.

Talks on how to fix problems with the protocol have stalled; UK legislation to override parts of the treaty has cleared the Commons; and Liz Truss, who introduced that bill, is - polls suggest - the current favourite to move into Downing Street.

In other words, why hold back when a negotiated solution, for now, looks very unlikely.

"If the UK takes steps towards adopting the Northern Ireland Protocol Bill, the EU isn't going to sit back and do nothing," one diplomat told me.

EU officials also want to push the UK, by whatever means it can, to take another look at its own proposals to fixing the protocol.

But it is the passage of the bill, rather than the legal action, that remains the more immediate and key thing to watch.

Sources here tell me that if it becomes law, and the UK does start unilaterally changing parts of the treaty, then Brussels could turn to trade sanctions.

It will be one for the new prime minister's in-tray this autumn.

The legal steps could eventually lead to the UK being fined under a dispute process overseen by the European Court of Justice (ECJ), the EU's top court.

However, the dispute process can take months to complete - and cases at the ECJ can take years to be heard.

What do to about relations with the EU over Northern Ireland is one of the big incoming challenges for the next Tory leader and UK prime minister, who will take office in early September.

Liz Truss, who as foreign secretary was responsible for introducing the protocol bill, has blamed EU "intransigence" for the current stand-off.

Her rival for the top job, former chancellor Rishi Sunak, has said the protocol poses challenges to the "the stability of the situation" in Northern Ireland.

In late 2021, it was reported he had urged Boris Johnson and his former chief Brexit negotiator Lord Frost not to "blow up " talks with the EU about the protocol. At the time the Treasury declined to comment.