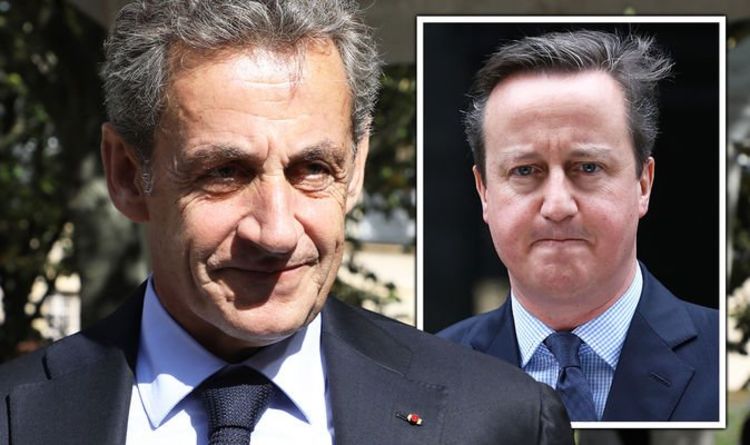 FRANCE's former President, Nicola Sarkozy, repeatedly clashed with David Cameron before a crisis summit of the eurozone's 17 members in 2011 and warned him to "shut up about the euro", unearthed reports reveal.
At the end of May, France and Germany announced they are backing the creation of an EU bond to raise €500billion (£447billion) to boost the European economy, severely weakened by the COVID-19 pandemic. The two leaders, Emmanuel Macron and Angela Merkel, unveiled their proposal in a joint video press conference. If approved, it would be the first time the bloc has pooled its debt in this way.

The measure immediately raised objections from the Netherlands, Austria, Denmark and Sweden, known as the "Frugal Four", who support the establishment of a one-off emergency fund but do not back debt sharing or a significant increase in the EU’s next seven-year budget.

However, the pressure that the pandemic poses on the EU as a whole might work in favour of the Franco-German joint proposal.

Andrew Watt, head of the unit for European economic policy at the Hans-Böckler Foundation, said: “The Frugals, on paper, have a fairly strong position in the sense that this whole thing is located within the European Union budget.

“In practice, though, none of them want to go down in the history books as the country that, faced with a pandemic, after all these countries have gone through, let them starve.”

The plan is, nonetheless, incredibly critical as, in the long run, it could raise questions over governments' ability to repay debts and also revive the threat of countries leaving the single currency.

Similarly, it was Britain, who, nine years ago, found itself in a similar position to the one of the Frugal Four.

As the crisis in the eurozone reached its peak, Britain demanded that all 27 EU countries be given the final say over measures to prevent the eurozone's sovereign debt crisis spreading and Europe sliding into deep recession.

However, according to a 2011 report by The Telegraph, at the end of a crisis summit, former French President Nicola Sarkozy expressed rage at the constant criticism and lectures from UK ministers.

Mr Sarkozy bluntly told Mr Cameron: "You have lost a good opportunity to shut up.

"We are sick of you criticising us and telling us what to do.

"You say you hate the euro and now you want to interfere in our meetings."

Following strong and vocal support from Sweden and Poland, Mr Cameron managed to secure an agreement that he and non-euro countries would be invited to the bank rescue summit the following week.

He also won a fight to include a “safeguard clause” that the eurozone would not be allowed to take any decisions on issues, such as regulation of financial services, that affected all the EU’s 27 members.

So when institutional changes to the primary law had to be agreed and ratified by all member states, Mr Cameron decided to use his veto to block the EU-wide treaty, claiming he had to protect key British interests – including its financial markets.

However, the former Prime Minister's victories were short-lived.

That same day, President Sarkozy hailed a “historic” breakaway “euro plus” bloc that would have pursued fiscal and economic union via a new treaty outside the EU, leaving Britain isolated and not part of the negotiations.

Despite not attending the meetings of the new fiscal union, Whitehall officials were braced for a string of new initiatives that would have had an impact on the British economy.

One Whitehall source said at the time: “A decision taken by the Euro-Plus summit is a fait accompli for the EU.

“If the Euro-Plus decides that will be translated into an EU decision via its in-built qualified majority, Britain won’t have a chance to influence EU decisions on economic, social and employment legislation that overrides its national law.”
#COVID-19  #Covid  #Angela Merkel
Add Comment