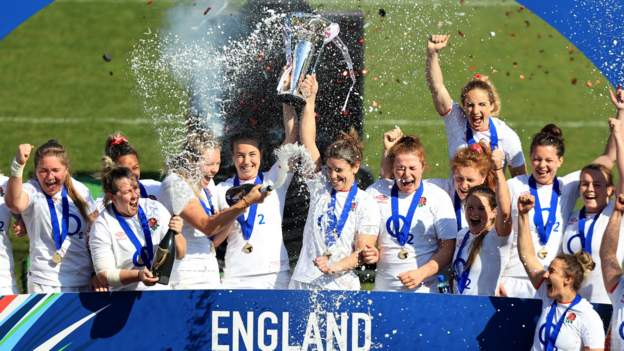 England won the Women's Six Nations for the third year in a row with a hard-fought final win against France.

Both sides were kept scoreless for most of what was nevertheless a thrilling first half, before Poppy Cleall's try put England ahead at the break.

The Red Roses' defence held firm and they were rewarded with an Emily Scarratt penalty to seal the title.

Few scores, but no shortage of entertainment

It was an experimental day for the Women's Six Nations with the tournament's first ever final, played outside the shadow of the men's event and a thrilling first half may well have captured the attention of new fans.

The championship was moved from its usual February and March slot, offering sunny conditions for England and France's impressive attacks to shine, but it was the defences who stole the limelight as both sides struggled to make an impact in the opposition 22.

Despite the lack of scoring, the meeting between two teams who have dominated European rugby for the past five years did not disappoint as they delivered on the early fireworks promised by England head coach Simon Middleton in the week.

The Red Roses had two penalties in the first quarter and captain Emily Scarratt uncharacteristically missed both, with the second almost in front of the posts.

The centre left the field shortly after for a head injury assessment. She was replaced by Lagi Tuima but the substitution was reversed after Scarratt passed the test around 10 minutes later.

England repeatedly failed to take advantage of attacking opportunities and France looked much more dangerous, with slick offloads almost leading to a try for Emilie Boulard but the score was ruled out because of a forward pass.

Finally, with the clock in the red, Poppy Cleall broke away from a scrum to bring England to within metres of the tryline, and she then picked up the ball from the base of a ruck and dived over the line.

This time, Scarratt was successful from the tee to put England seven points up at the break.

England hold on with gritty defence

The Red Roses struggled to build on the score in the second half and instead gave Drouin two chances to trim their lead. Drouin missed the first but made no mistake with the second.

England managed to make it into France's 22, but gave away a penalty and Les Bleues wrestled back momentum again.

Captain Sarah Hunter took to the field and should have offered England a boost along with replacement hooker Amy Cokayne.

France had different ideas and continued to apply pressure, forcing errors from their opponents and first scrum-half Leanne Riley then full-back Sarah McKenna dropped high balls to give the visitors prime attacking opportunities.

Nerves continued to show as England fly-half Helena Rowland, whose boot had been flawless in the first half, missed a kick to touch and McKenna kicked the ball out on the full.

Errors may have been the Red Roses' undoing in attack but they showed gritty determination in defence to hold back repeated French efforts.

Cleall left the field nursing an injury to her left arm just as England were forced to defend what could have been a crucial 10m line-out for France.

The visitors knocked the ball on but England immediately gave away a penalty in front of the posts which Drouin converted to reduce the deficit to one point with seven minutes remaining.

But the Red Roses showed the kind of professionalism and composure that may prove vital at next year's postponed World Cup, keeping the ball and running the clock down, eventually winning a penalty that Scarratt slotted over to seal their eighth win in a row against France.

Player of the match - Zoe Aldcroft 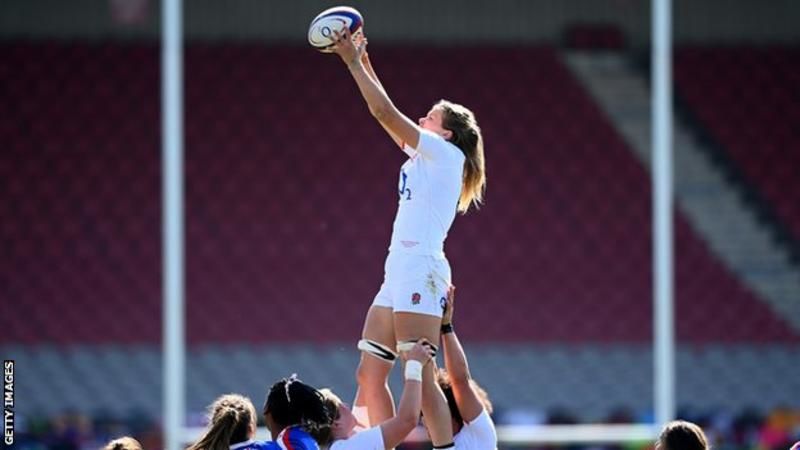 "The defence was unreal and we had to dig in. I could have made it easier with a couple of penalties in the first half, but I'm really proud of the effort. The desire to not let them over the tryline was superb."

England flanker Zoe Aldcroft said on BBC Two: "It means so much, we have worked so hard since January. They pushed us back in the tackles but we held it together and kept going."

Former England international Danielle Waterman said on BBC Two: "England had to work for that - it was bruising with the big hits that went in - and they didn't play their best but they got the win.

"France had so much possession and territory and will be massively disappointed."