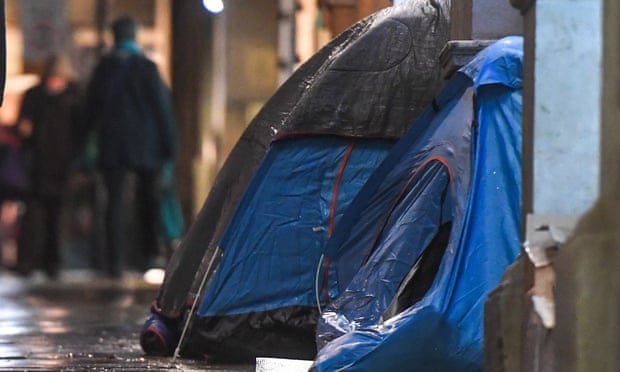 Councils in England have been told by the government to “redouble their efforts” to house all rough sleepers, and make sure they are registered with a GP to enable them to receive a Covid vaccine over the next few weeks.

The government also renewed existing temporary protections for renters by extending its ban on evictions for all but the most extreme cases for the next six weeks – until at least 21 February – with the policy kept under review.

The announcement on Friday followed increasing pressure on ministers to step up their pandemic homelessness policy by campaigners alarmed at rising numbers of rough sleepers as the UK went into lockdown amid freezing winter weather.

Issuing update guidance, the communities secretary, Robert Jenrick, said: “At the start of this pandemic we made sure that the most vulnerable in society were protected. This winter, we are continuing in this vein and redoubling our efforts to help those most in need.”

The guidance says local authorities must ensure rough sleepers can access the Covid-19 vaccine in line with other at-risk priority groups outlined by the Joint Committee on Vaccination and Immunisation, either via a GP or “by other means if mainstream provision is unsuitable”.

Friday’s announcement was broadly welcomed by homelessness charities. Jon Sparkes, the chief executive of Crisis, called it a “lifesaving intervention” at the “most dangerous moment of the pandemic for those without a home”.

While local authorities welcomed an extra £10m government funding to help support efforts to house rough sleepers over the next few weeks, they warned more cash would be needed.

Although thousands of rough sleepers were taken off the streets during the first lockdown, there has been a rise in numbers since the original guidance lapsed in June, with many unable to access housing help from their local authority because they have no recourse to public funds, such as immigrants.

The Ministry for Housing, Communities and Local Government said it expected councils to consider the needs of those who may otherwise be ineligible for support because of immigration status. A spokesperson said: “Councils must use their judgment in assessing what support they may lawfully give to each person on an individual basis, considering that person’s specific circumstances and support needs.”

There was a cautious welcome for the extension of the eviction ban. The housing charity Shelter said that while the ban did not halt the evictions process entirely, it was “the minimum required to keep more people safe in their homes” for the time being.

The Welsh government has also extended its eviction ban – though for a longer period, until 31 March. “Renters should not be forced out of their homes, at a time when we are asking people to stay at home,” said the Welsh housing minister Julie James.

The campaign group Generation Rent said the new arrangements in England weakened the government’s original guidance, which said renters could only face eviction if they had more than nine months of arrears. This has been shortened to six months.

A London Renters Union spokesperson said the changes would affect renters pushed into arrears for the first time by Covid-19: “For the first time since the start of the pandemic, the government is giving the go-ahead to bailiffs evictions of people because of arrears [built up] during the pandemic.”