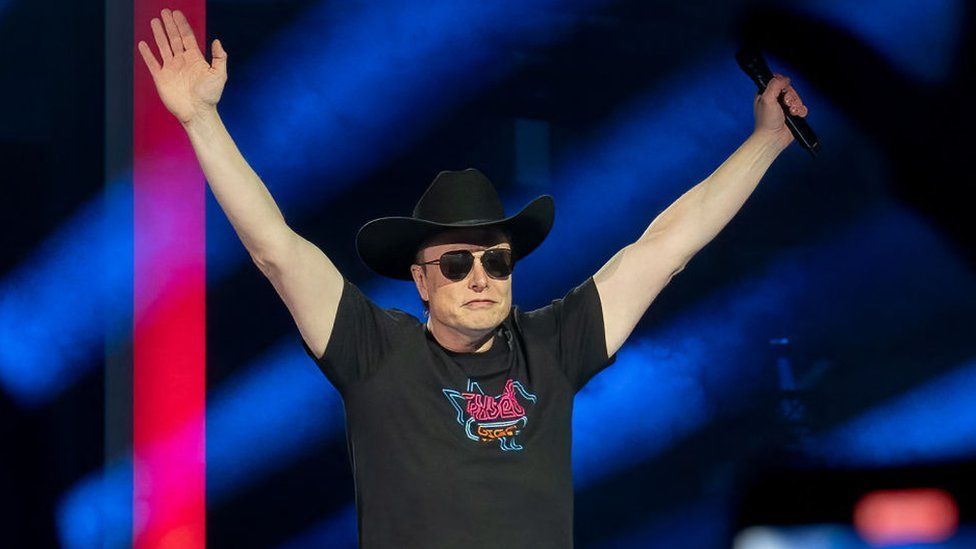 Tesla boss Elon Musk has admitted he is "not sure" his takeover bid for social media firm Twitter will be successful.

He made the comments at a conference just hours after revealing that he had offered to buy the company for $54.20 a share, valuing the firm at $43bn.

Also on Thursday, Twitter's chief executive told employees that the company was evaluating the approach.

Parag Agrawal reportedly said at the staff meeting that the company was not being "held hostage" by the offer.

Speaking at the TED2022 conference in Vancouver, Mr Musk said: "I am not sure that I will actually be able to acquire it."

He added that he had a "Plan B" if his bid for Twitter was rejected, but gave no further details of what that could mean.

Mr Musk also said at the event that Twitter should be more open and transparent. "I think it's very important for there to be an inclusive arena for free speech," he said.

On Thursday, he revealed his offer to buy all the shares in Twitter that he does not already own.

In an official filing to US regulators, Mr Musk said he was the right person to "unlock" the company's "extraordinary potential" and that if his offer was not accepted, "I would need to reconsider my position as a shareholder."

He also said that if Twitter's board of directors chose to reject the offer, it would be "utterly indefensible not to put this offer to a shareholder vote".

Saudi Arabia's Prince Alwaleed bin Talal shunned the bid, tweeting: "I don't believe that the proposed offer by Elon Musk comes close to the intrinsic value of Twitter given its growth prospects."

The billionaire claimed that he has a stake in Twitter through his investment firm Kingdom Holding Company. However, Mr Musk immediately replied asking how many Twitter shares Prince Alwaleed's firm owns, adding: "What are the Kingdom's views on journalist freedom of speech?"

Twitter confirmed that it had received the bid, but said its board must still review the "unsolicited, non-binding" offer, which values its shares at well below the level of more than $70 that they reached last summer.

Mr Musk already owns more than 9% of the social media platform, but he is no longer its biggest shareholder.

Asset management firm Vanguard Group disclosed on 8 April that its funds now own a 10.3% stake, bumping him off the top spot.

Mr Musk is the world's richest man, according to Forbes magazine, mostly due to his shareholding in electric vehicle maker Tesla where he is chief executive.

He has not revealed any details on how his bid for Twitter will be financed. Mr Musk is being advised by US investment bank Morgan Stanley.

Bruce Daisley, Twitter's former vice president for Europe, Middle East and Africa, told the BBC's Today programme that Mr Musk appeared to be "toying with the company to some extent".

"The latest bid he's put in, as far as I can tell, doesn't seem to be regarded as a serious bid but it is proving to be very disruptive with the organisation I think."

He said that Twitter may benefit from being taken private and out of the hands of shareholders.

"To some extent the constant scrutiny of being a publicly listed company, following in the footsteps of the likes of Google and Facebook, is definitely a challenge for the organisation so private ownership might be the right solution.

"I'm not convinced Elon Musk's approach is going to win many fans though," he added.

Twitter's shares, which are listed in New York, initially rose on Thursday but ended down 1.6% at $45.08, below Mr Musk's offer.

The board of Twitter has enlisted the help of another Wall Street bank, Goldman Sachs, as it considers how to respond to the takeover approach.

Other than acknowledging the takeover bid, Twitter has publicly kept pretty quiet since Elon Musk revealed his attempt to buy the company.

But details have emerged of an "all hands" meeting, where questions were put to the company's chief executive, Parag Agrawal.

The details give nothing more than a suggestion of what Twitter's management thinks of the offer. Mr Agrawal reportedly said he could not talk about the details, but that the company was not being "held hostage".

I'm told the meeting was designed to give employees more information. But one Twitter worker told me they left the meeting more confused. "I didn't leave feeling any sense of clarity," they said.

The employee said that they were in the dark about what could happen next. "I would say I know about as much as the public on Twitter," they said.

Twitter's board not only has to weigh up the offer, but also assess the damage that Elon Musk could do if scorned. Apparently he has a Plan B if Twitter rejects his offer.

Twitter may be worth tens of billions of dollars, but it is nothing compared to Elon Musk, who is worth more than $200bn. And that kind of wealth makes him a dangerous foe.