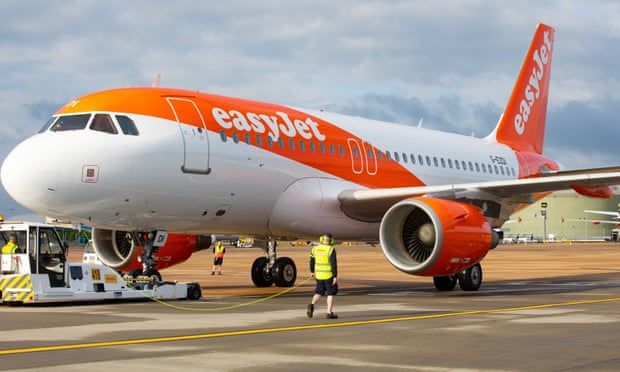 UK airports, ports and roads under pressure with Dover passengers facing long queues and motorists warned of major jams
EasyJet has cancelled more than 200 flights over half-term from London Gatwick, upending the plans of tens of thousands of holidaymakers in the busiest period for air travel since the pandemic.

The last-minute cancellations came the day after the airline, Britain’s biggest by passenger numbers, suffered IT problems that left a further 200 flights unable to take off, and followed cancellations earlier in the day at London Gatwick in the early morning peak.

Friday was the busiest day at British airports since the start of the pandemic, as half-term holiday began for the vast majority of schools across England and Wales. Travellers trying to take cross-Channel ferries also faced long queues at Dover, while drivers around the country were warned to expect jams.

EasyJet’s decision to cancel about 240 flights over 10 days had been prompted by a combination of issues affecting operations, a spokeswoman said. She said: “We have taken the decision to make advance cancellations of around 24 Gatwick flights per day starting from tomorrow 28 May until 6 June.

“We are very sorry for the late notice of some of these cancellations and inconvenience caused for customers booked on these flights however we believe this is necessary to provide reliable services over this busy period. Customers are being informed from today and provided with the option to rebook their flight or receive a refund and can apply for compensation in line with regulations.”

Meanwhile, the RAC issued a warning over congestion on motorways and major A roads as an estimated 17.9m leisure trips by road will be made between Friday and Sunday, with Saturday the busiest day.

Its spokesman Rod Dennis said: “Major routes to holiday destinations will start to clog up … Drivers can beat the worst of the queues by planning the time of their trips carefully. An early start is always best or, failing that, driving at dusk if that’s a feasible option.”

Passengers travelling to Europe via Dover – including thousands of Liverpool supporters heading to Paris for football’s Champions League final on Saturday night – were facing long queues at the port, at the start of the half-term getaway.

The Port of Dover advised passengers to pack supplies of food and water as it expected a “very busy week ahead”. Irish Ferries warned customers to expect delays of up to three hours at port security and check-in, and P&O Ferries warned of heavy traffic at border control. Passengers who miss sailings are normally accommodated on the next service.

Almost 8,000 flights will depart from UK airports this weekend, from Friday until Sunday, according to data from the analysts Cirium, with Friday seeing the highest number of scheduled departures since March 2020.

Despite the increase in passenger numbers coming on the back of Thursday’s cancellation chaos, Britain’s airports stressed they were coping with the increased demand.

Gatwick said early check-in queues had cleared by the mid-morning, as it prepared for more than 800 flights and 120,000 passengers at the airport on Friday, the highest numbers since March 2020..

Manchester airport, where there have been some delays, said it was expecting a busy weekend – but that while queues in security had been as long as one hour early on Friday, they were now moving quickly. The airport is seeking to recruit hundreds of new security officers, after taking on 200 starters in the last month.

Unions warned that delays were likely to play out through half-term and could be worse in the summer holidays.

Unite, which represents tens of thousands of aviation workers, blamed airlines and airports for laying off employees during the pandemic and paying low wages.

Its general secretary, Sharon Graham, said: “We warned this corporate greed would cause chaos in the industry. The aftermath of mass sackings is now chronic staff shortages across the board. Current pay and conditions in the industry are so poor that workers are voting with their feet.”
Add Comment