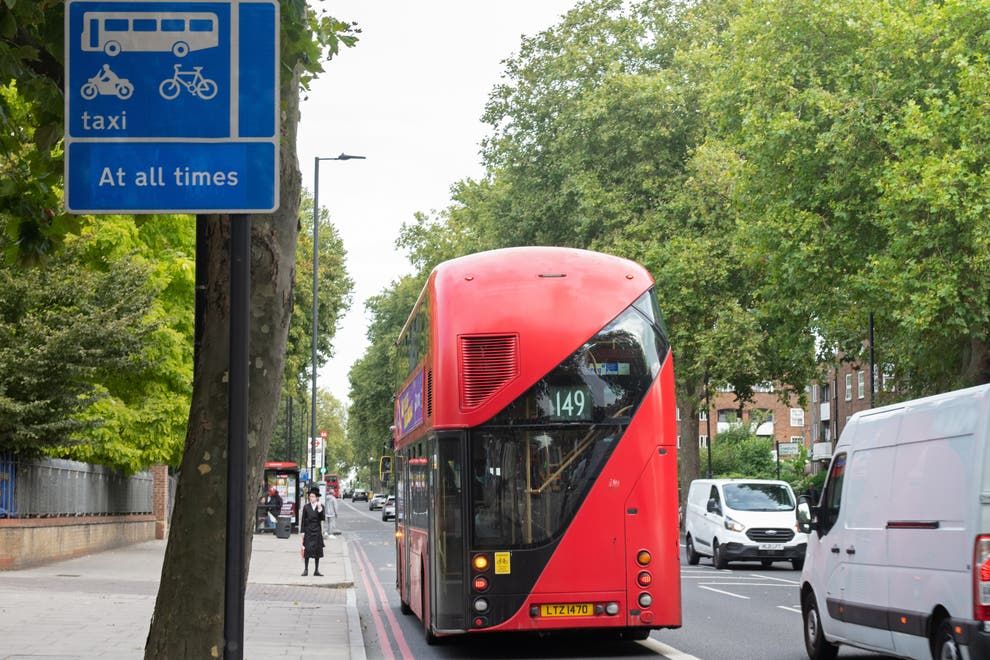 Drivers will be required to stay out of key bus lanes 24/7 or face a £130 fine after Transport for London announced a round-the-clock trial is to be made permanent.
The aim was to prevent the return to car use – seen after the end of the first wave of the pandemic – causing buses to get stuck in increasing levels of traffic.

The decision to retain the extended operating hours of the bus lanes – which include more than 100 bus lanes on TfL’s “red route” network in 20 boroughs – will also provide a boost to TfL’s income.

Last year, TfL received between £1million and £2million a year from penalty tickets issued to drivers who strayed into bus lanes. It issued 15,451 bus lane PCNs in 2020/21, according to London Councils. Drivers who pay within a fortnight are charged £65.

Bus passenger numbers had returned to about 75 per cent of normal levels prior to the arrival of Omicron last month.

But with road traffic at 95 per cent of pre-pandemic levels, improvements in bus speeds and reliability have fallen away.

The average speed of a London bus is now 10.3mph, according to TfL’s latest Travel in London report – up from 9.3mph last year but below speeds of 12mph seen in summer last year.

TfL said on Wednesday that the 24/7 bus lanes had resulted in improvements in bus journey times that were “particularly noticeable in central and inner London, especially in both the mornings and evenings and throughout Sundays” but did not provide precise figures.

“The extension of bus lane hours to 24 hours on London’s busiest roads received a lot of support, and these changes will reduce bus journey times and help service reliability, helping people get around the city easily and sustainably.”

Louise Cheeseman, director of bus operations at TfL, said: “We closely monitored the trial of extended bus lane hours and listened carefully to feedback, and it is clear that the trial has been a success in delivering reduced journey times on buses.”

TfL said retaining 24/7 bus lanes would also benefit cyclists as they can use the lanes in the knowledge there will be less traffic.

The Travel in London report, which was published last week, said: “Apart from the obvious delays and discomfort that it causes to individuals caught in traffic, congestion can be very detrimental to bus speeds (where there are no segregated bus lanes).”

Arthur Leathley, chair of London TravelWatch, the passenger watchdog, said “No one likes sitting in a traffic jam on London’s congested roads and people travelling in the capital need a reliable bus service to get to work, school or see their families.

“We’ve recently published research showing that if roads are cleared for buses on London’s roads, by doing things like introducing more 24-hour bus lanes and increasing parking enforcement on bus routes, TfL would be able to run fewer vehicles and potentially save between £100-200m as journey times will get shorter, and more people will use them.

“Making the bus lanes trial permanent is a good first step and we hope that TfL and the boroughs will be able to go even further with measures to free the bus in 2022.”
Add Comment