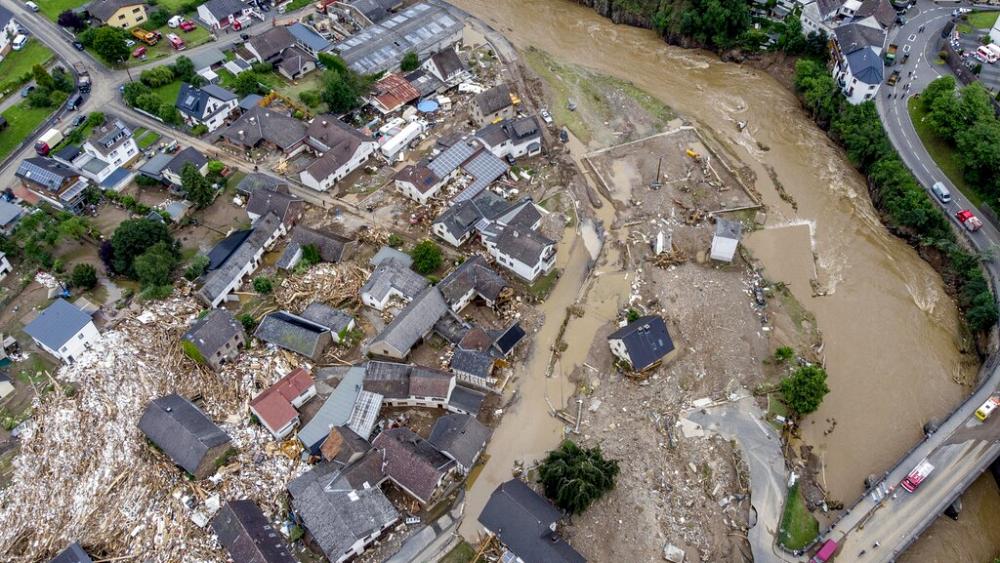 The number known to have died has risen in Germany and Belgium after heavy rain caused rivers to burst their banks, sweeping away homes and cars.

Torrential rain and flooding has left dozens of people dead and others still missing in western Europe, with Germany bearing the brunt of the worst natural disaster in living memory.

The number known to have died was estimated to be at least 67 on Thursday evening, with many more injured. German Chancellor Angela Merkel has called it a "tragedy", while several politicians have blamed the impact of climate change.

Heavy rains have caused rivers to burst their banks, sweeping away homes and cars.

At least eight people are also said to have died in Belgium, while France, the Netherlands and Switzerland were also hit by flooding.

On Thursday evening the German authorities indicated that at least 59 people had died in the west of the country, a rise from the previous toll of 45 fatalities.

It's one of the worst natural disasters Germany has experienced since the Second World War. Many towns and villages have been flooded following torrential rain.

Police in the western state of North Rhine-Westphalia said five more bodies had been discovered, bringing the total number of those known to have died in the region to 31. In Rhineland-Palatinate nine more deaths were anticipated in addition to the 19 already confirmed.

Earlier on Thursday the authorities said that communication, including internet and telephone connections, was restricted with the 112 emergency number "not reachable".

Dozens of people were reported missing after several homes collapsed in the village of Schuld in the Eifel, a volcanic region of rolling hills and small valleys.

Many villages were reduced to rubble as old brick and timber houses couldn't withstand the sudden rush of water, often carrying trees and other debris as it gushed through narrow streets. 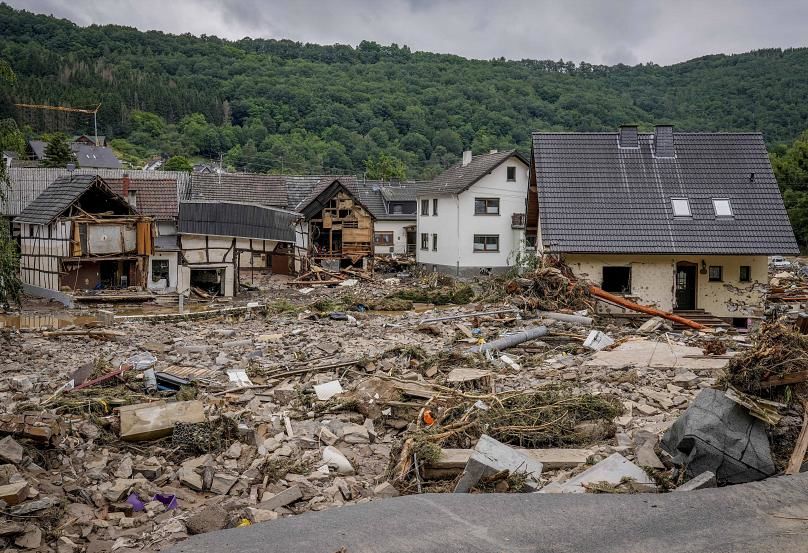 This video shows submerged cars in Uxheim, also in Rhineland-Palatinate on July 14. Subsequent footage reveals the scene the following day.

Meanwhile, this was a rescue operation in Trier, further south from Uxheim

It comes after five deaths were reported on Wednesday, including an 82-year-old man who died in Wuppertal after falling in his flooded basement and a fireman who drowned in Altena during rescue work.

The governor of Rhineland-Palatinate state, Malu Dreyer, told the regional parliament on Thursday that "We have never seen such a disaster. It's really devastating."

Chancellor Angela Merkel, in Washington for a meeting with US President Joe Biden, said in a statement that she was "shocked by the catastrophe that so many people in the flood areas have to endure".

"My sympathy goes out to the families of the dead and missing. My heartfelt thanks go to the many tireless helpers and emergency services," she added.

Across the border, in Belgium the Belga news agency reported on Thursday evening that eight people had died and four more were missing.

Earlier in the day, the governor of Liege Province, Catherine Delcourt, said that at least two people had lost their lives and that several others were missing.

Residents in Chaudfontaine, on the banks of the river Vesdre, began to be evacuated on Wednesday afternoon. The operation was expected to involve up to 1,700 people, RTBF reported.

In addition, hundreds of scouts who were camping in Wallonia have had to be evacuated and rehoused since Tuesday night.

"We are evacuating the scout camps one after the other," Corine Mullens, the mayor of Rochefort (south), a tourist town where several rivers meet, told RTL-TVI.

A total of 120 camps are affected and either have to be evacuated or postpone their trips because of the weather, Gilles Beckers, spokesman for the Scouts of Belgium, told the 24-hour news channel LN24.

The French government said that 40 rescuers from its Civil Security Training and Intervention Unit, as well as a helicopter with two water rescue specialists on board, were on their way to Belgium to help. They are being deployed as part of the European Union's Civil Protection and Humanitarian Aid.

European Commission chief Ursula von der Leyen wrote on Twitter on Thursday morning that the bloc "is ready to help" and that countries impacted by the floods can call on the EU Civil Protection Mechanism.

"My thoughts are with the families of the victims of the devastating floods in Belgium, Germany, Luxembourg and the Netherlands and with those who have lost their homes."

Italy and Austria have also offered flood rescue teams to Belgium, the Commission said, while the EU's Copernicus emergency satellite mapping is providing assessment maps of the affected areas. 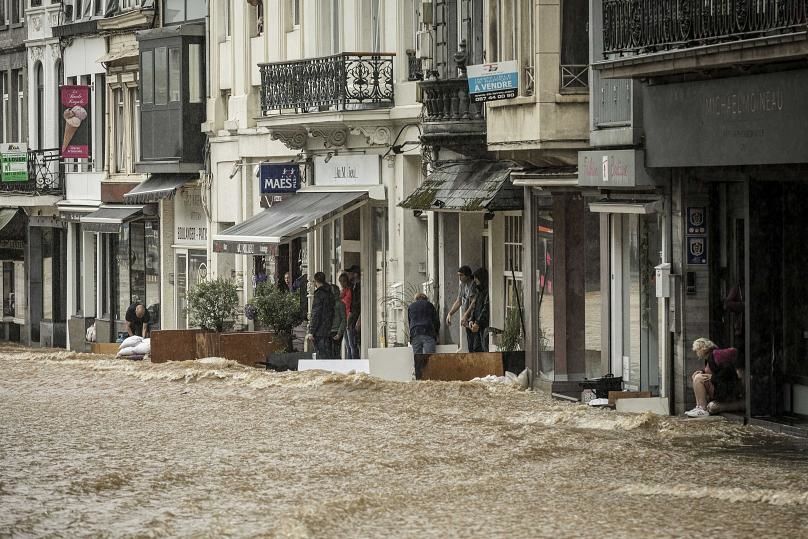 People put up barriers and lay sandbags to protect their shops from flood waters in the centre of Spa, Belgium, July 14, 2021.

France has also been battered by heavy rainfalls with 11 north-eastern départements still under amber warning on Thursday morning due to the risk of flooding.

MeteoFrance said that up to 90 mm of rain could fall over these areas, which represents three weeks to a month of rain. It stressed that up to 70mm of rain have already fallen in large swathes of the northeast since Tuesday and that "the soils are already saturated with water and mudflows possible in sloping areas."

Authorities in the southern Dutch town of Valkenburg, close to the German and Belgian borders, evacuated a care home and a hospice overnight amid flooding that turned the tourist town’s main street into a river, Dutch media reported.

The Dutch government sent some 70 troops to the southern province of Limburg late Wednesday to help with tasks including transporting evacuees and filling sandbags as rivers burst their banks. There were no reports of injuries linked to flooding in the Netherlands.

Swiss lakes at risk of flooding

In Switzerland, the heavy rainfalls have saturated the soil and caused landslides and mudslides.

Authorities in Geneva recommend not to walk along rivers and not to go down the Rhône due to high flow conditions. The level of Lake Geneva is also of concern to the authorities.

The risk of flooding was high on the shores of Lake Zurich and the Limmat River and authorities have also urged people not to go to forests for safety reasons after violent storms and gusts of winds exceeding 100 km/h feel trees.

Lake Lucerne, in central Switzerland, also poses a very high risk of flooding, warned MeteoSchweiz, while the lakes of Thun, Biel, the Upper Rhine and the Reuss River are at high risk.

Several mountain passes and tunnels have been closed, and rail traffic has been disrupted in several parts of the country, according to the Swiss Federal Railways (SBB).