Diego Maradona, the Argentine who became one of soccer’s greatest players with a roguish cunning and extravagant control while pursuing a personal life rife with drug and alcohol abuse and health problems, died on Wednesday in Tigre, Argentina, in Buenos Aires Province. He was 60.

His spokesman, Sebastián Sanchi, said the cause was a heart attack. Maradona’s death came several weeks after he underwent brain surgery for a subdural hematoma, bleeding that collects in tissues surrounding the brain and can be caused by a head injury.

The news of the death caused an immediate commotion in Argentina, becoming virtually the sole topic of conversation. The government declared three days of national mourning.

“You took us to the top of the world,” President Alberto Fernández said of Maradona on Twitter. “You made us immensely happy. You were the greatest of all.” The Brazilian soccer great Pelé tweeted, “I lost a great friend and the world lost a legend.”

Wearing the No. 10 jersey of a playmaker, Maradona led Argentina to soccer’s world championship in 1986, scoring one of the game’s most controversial goals and one of its most celebrated in the span of four minutes during the quarterfinals against England.

In 2000, he and Pele of Brazil were voted by FIFA, the soccer’s world governing body, the sport’s two greatest players. Yet while Pele’s legend grew into international reverence, Maradona’s ability to surprise and startle developed a darker edge as he became addicted to cocaine during his playing days in the 1980s.

His thick musculature having bloated into unhealthy corpulence, Maradona was hospitalized in Buenos Aires in April 2004 with what doctors described as a weakened heart and acute breathing problems. He then entered a psychiatric hospital there and, that September, left for further rehabilitation treatment in Havana.

His numerous health issues also included gastric bypass surgery to contain his weight and treatment for alcohol abuse. As a spectator at the 2018 World Cup in Russia, Maradona appeared to collapse and was treated by paramedics as Argentina secured a dramatic late victory over Nigeria to advance to the second round of the tournament.

Speaking to an Argentine television channel in 2014, Maradona said, “Do you know the player I could have been if I hadn’t taken drugs?”

Such was the complexity of Maradona’s personal life, according to news accounts, that he was the father of eight children, including two daughters with his wife at the time, Claudia Villafañe — they later divorced — and three children fathered while he was in Cuba undergoing treatment for his cocaine addiction. His survivors include those daughters, Dalma and Gianinna, as well as three children from other relationships: Diego Armando Maradona Sinagra, an Italian soccer player; Jana Maradona; and Dieguito Fernando Maradona.

Diego Armando Maradona was born Oct. 30, 1960, in Lanus, Argentina, and raised in the Buenos Aires shantytown Villa Fiorito, where he took up soccer on dusty streets with an urchin’s resourcefulness. By age 15, he had turned professional. He later starred with the European club powers Napoli and Barcelona and, in 2010, coached Argentina in the 2010 World Cup, held in South Africa.

In his autobiography, Maradona wrote that he had become so skilled a player as a youth that opposing coaches sometimes accused him of being an adult midget.

At his feet, the ball seemed to obey his command like a pet. He played with a kind of brilliant camouflage, seeming to be somnolent for long stretches before asserting himself at urgent moments with a mesmerizing dribble, astounding pass or stabbing shot.

The fame and infamy that attended his career and his life were on display for the world on June 22, 1986, when Argentina faced England in a World Cup quarterfinal match held at Azteca Stadium in Mexico City. Tension from the Falklands war between the two countries, four years earlier, still lingered.

Six minutes into the second half of a scoreless match, Maradona plunged into the English defense and slid a short pass to a teammate. The ball ended up on the foot of the English midfielder Steve Hodge, who looped a pass back toward his goalkeeper, Peter Shilton, only to see the predatory Maradona intercede. Though he was only 5 feet 5 inches tall, Maradona jumped high into the air and punched the ball into the net.

He did not use his head, as it first appeared, but rather his left fist, a maneuver not allowed by any soccer player but the goalkeeper. The Tunisian referee should have waved off the goal but, perhaps having not seen the offense, did not.

Maradona later gave conflicting accounts of what had happened. At first he said he had never touched the ball with his fist; then he said he had done so accidentally; then he attributed the goal to divine intervention, to “the hand of God.”

This infuriated the British.

“Brazen and shameless, Maradona was all mock innocence, talking about the ‘hand of God,’” Brian Glanville wrote in his book “The History of the World Cup.” “For England, rather, it was the hand of the devil.”

Four minutes later, Maradona scored again, eventually giving Argentina a 2-1 victory. His second goal came after a dribble of 70 yards through five English players and a final feint past Shilton to punch the ball into an empty net. Deftly, he changed directions like a slalom skier slashing from one gate to another.

In his book “The Simplest Game,” Paul Gardner described the run as “10 seconds of pure, unimaginable soccer skill to score one of the greatest goals in the history of the World Cup.”

In the 1986 final, Maradona’s pass through the middle of the West German defense set up the winning goal in a 3-2 victory for Argentina. “No player in the history of the World Cup had ever dominated in the way Maradona ruled over Mexico-86,” Gardner wrote.

Maradona threatened to will his way through the 1990 World Cup — gathering a loose ball, feinting around a defender and passing through a thicket of legs to assist on the only goal in a quarterfinal win against Brazil. In the semifinals, against Italy, the host team, Maradona scored the penalty kick that put Argentina ahead as it won the shootout.

This was Maradona in his glory. The match was played in the raucous port city of Naples, where Maradona played professionally and led Napoli to two titles in the Italian League. Audaciously, he had asked fans there to cheer for Argentina over Italy.

But there was no magic left for the 1990 final against Germany. Maradona was bruised from being fouled repeatedly, and he lacked several prominent teammates, who had been suspended for committing flagrant fouls. Argentina lost, 1-0, on a penalty kick.

The Italians at Rome’s Olympic Stadium booed Maradona whenever he touched the ball. After all, he had eliminated Italy from the tournament. Afterward, he sourly charged that the penalty had been called as retaliation against Italy’s premature exit.

His own career then began to implode.

In 1991, Maradona tested positive for cocaine while playing for Naples and received a 15-month suspension. His behavior grew erratic. In February 1994, he fired an air rifle at reporters outside his summer home in Argentina.

Later that year he was thrown out of the World Cup, held in the United States, after testing positive during the tournament for a cocktail of stimulants. Aging by then, he apparently needed an energy boost for his tired legs, or desperate assistance in losing weight.

But such was his renown that Maradona later coached Argentina in the 2010 World Cup, where it was embarrassed, 4-0, by Germany in the quarterfinals.

He had a peripatetic career coaching club teams in Argentina, the United Arab Emirates and Mexico. In September, he was hired to coach the Argentine club Gimnasia y Esgrima in La Plata. On his 60th birthday, Maradona attended his team’s match against Patronato, but left early in what became a 3-0 victory, prompting questions about his health.

When he entered a hospital on Nov. 2, Dr. Luque said, Maradona had been feeling sad, lacked an appetite and had trouble walking. 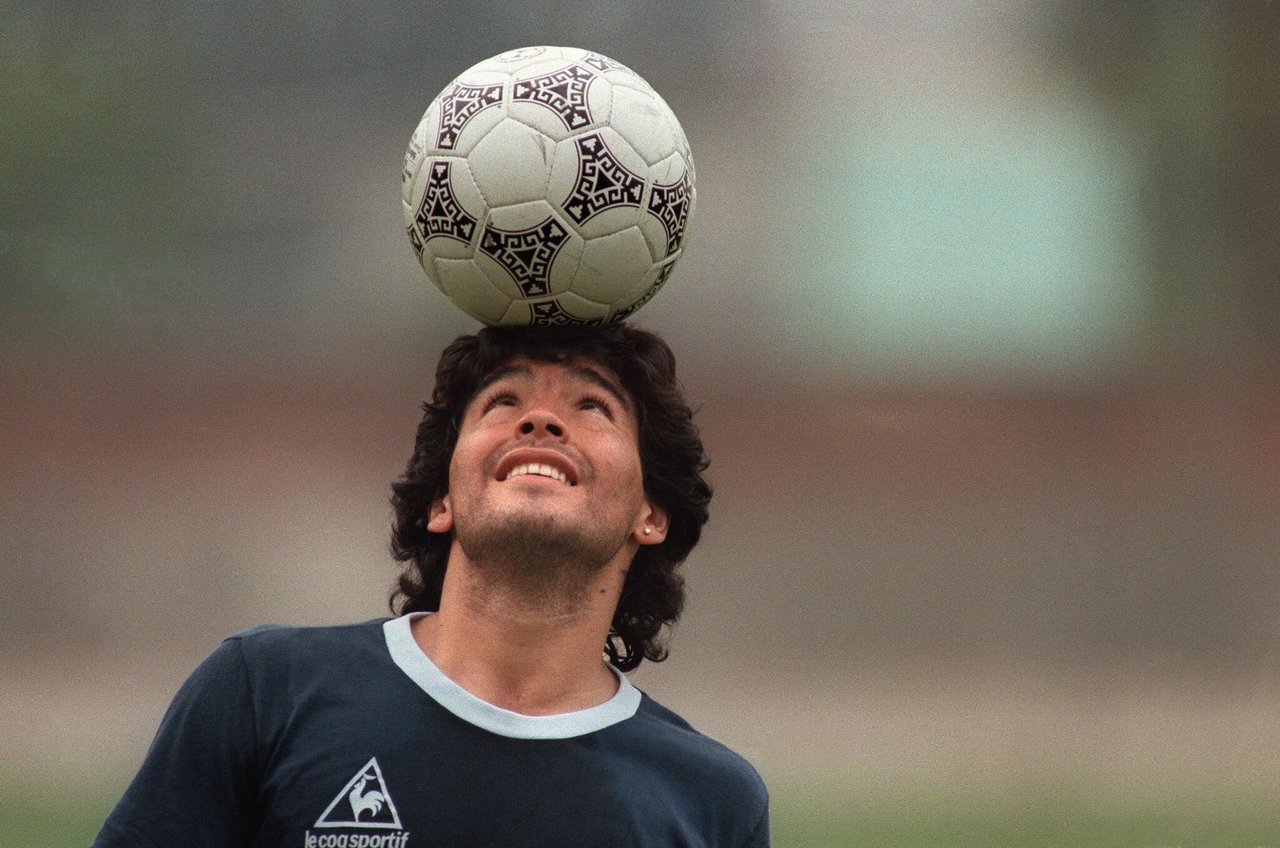