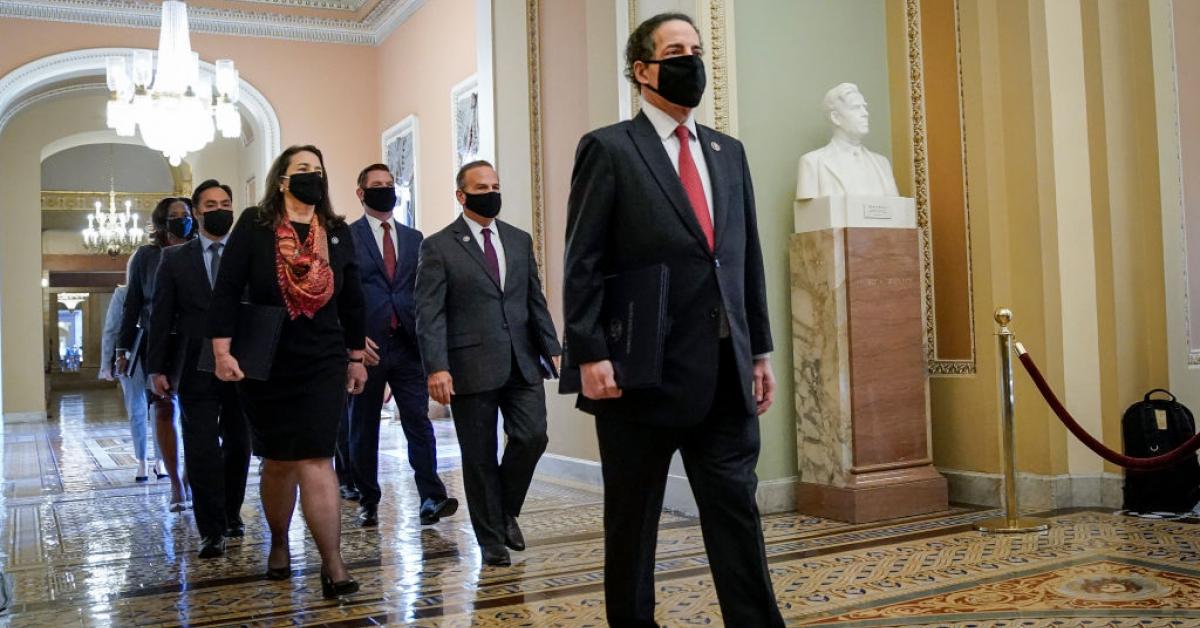 Six Republicans joined all 50 Democrats in the vote, which paves the way for opening arguments to begin on Wednesday. Here are takeaways from Day 1.

The Democratic-led Senate formally voted on Tuesday to proceed with former President Trump's second impeachment trial in the Senate following the first day of arguments.

The vote on the constitutionality of the trial of Trump was 56-44 in favor of moving forward with the trial. The second day of the trial begins at noon on Wednesday. There were six Republican senators voting yes with all Senate Democrats including Bill Cassidy of Louisiana, Susan Collins of Maine, Lisa Murkowski of Alaska, Mitt Romney of Utah, Ben Sasse of Nebraska, and Pat Toomey of Pennsylvania.

Lead House impeachment manager Rep. Jamie Raskin of Maryland was the first to speak on the Senate floor as the trial began at 1pm.

Raskin introduced a video that began with Trump's speech at the rally that took place on the day of the Capitol riot.

"We're going to walk down to the Capitol," Trump said in the clip from Jan. 6 before it cut off in the video.

Trump's full quote was, "We’re going walk down to the Capitol and we’re going to cheer on our brave senators, and congressmen and women. We’re probably not going to be cheering so much for some of them because you’ll never take back our country with weakness. You have to show strength and you have to be strong. We have come to demand that Congress do the right thing and only count the electors who have been lawfully slated."

Trump continued, saying, "I know that everyone here will soon be marching over to the Capitol building to peacefully and patriotically make your voices heard. Today, we will see whether Republicans stand strong for integrity of our elections, but whether or not they stand strong for our country."

The video Raskin showed contained edited footage of rally attendees marching toward the Capitol. It also included footage of some protestors yelling, "lets get in" outside of the Capitol building and later breaking into the building.

"Stop the steal," protestors chanted in some of the clips in the video as they entered the U.S. Capitol Building.

The video included remarks from Senate Republican Leader Mitch McConnell speaking about how he was planning to vote to certify the results of the presidential election.

Raskin argued that Trump's actions on Jan. 6 is a high crime and misdemeanor.

Raskin said there isn't a “January exception” in the U.S. Constitution if a president commits impeachable offenses shortly before the end of his term.

"Senators, this cannot be our future. This cannot be the future of America. We cannot have presidents inciting and mobilizing mob violence against our government and our institutions because they refuse to accept the will of the people under the Constitution of the United States," he said.

"Much less can we create a new January exception in our precious beloved Constitution that prior generations have died for and fought for so the corrupt presidents have several weeks to get away with whatever it is they want to do. History does not support a January exception in any way so why would we invent one for the future?" he added.