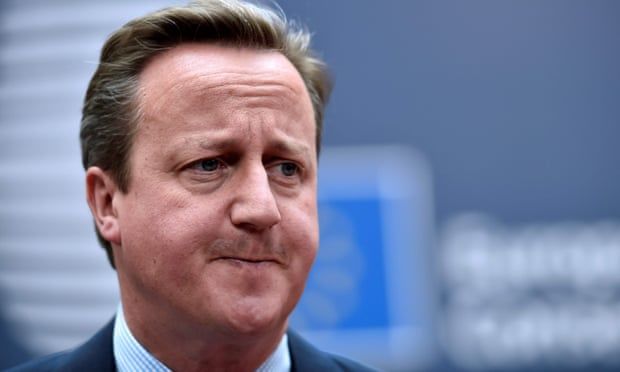 Sources say former PM met with insurance officer named in investigation into now collapsed bank
David Cameron, the former UK prime minister, has not responded to claims that he met with an Australian insurance company employee dismissed over his alleged involvement in underwriting the controversial lending model at the now-collapsed bank Greensill Capital.

Sources have told the Guardian that Cameron, who was an adviser and shareholder in Greensill, travelled to Sydney in 2018 and during his stay met with Greg Brereton, an employee at a small insurance company called The Bond & Credit Co (TBCC). The meeting reportedly took place at the insurer’s offices.

A year later, in July 2019, Brereton was dismissed after being accused by his employers of exceeding his authority by signing off on A$10 billion (£5.6bn) of insurance to cover loans by Greensill to its customers.

Cameron has not responded to requests for comment about the purpose of his visit. There is no suggestion of any wrongdoing by the former Conservative leader. However, the news is likely to spotlight his role an adviser to the now insolvent firm.

Greensill, which lent cash to large businesses so that they could pay their suppliers, made money by packaging and selling loans on to investors. The insurance contracts that Brereton arranged helped ensure the loans were attractive, by signalling that insurers would pay out even if Greensill’s customers ultimately defaulted.

Tens of thousands of jobs are now at risk at Greensill Capital’s corporate clients, which relied on it for finance to pay their suppliers.

Greensill’s biggest single client, GFG Group, owned by British businessman Sanjeev Gupta, is racing against time to refinance some its debt to Greensill Capital so that it can avoid a failure that could devastate communities that depend on steel mills it runs in Britain and Australia.

In early March, documents released by a Sydney court included the allegation that Brereton went too far in servicing Greensill’s need for insurance. Those documents were submitted to Australian courts, as Greensill tried to force TBCC to renew policies covering loans worth A$4.6bn (£2.6bn) which it had made to customers. Greensill was unsuccessful and the insurance lapsed.

The unwillingness of TBCC’s owner, a large Japanese insurer called Tokio Marine & Nichido Fire Insurance, to extend some of the policies that Brereton was alleged to have written has emerged as a prominent factor in Greensill’s collapse. The bank appointed administrators in the UK and Australia, where its head office is located, last week.

On Tuesday, German regulators announced they had started to wind up the firm’s local subsidiary, Greensill Bank, triggering compensation scheme payouts for protected savers who deposited nearly €3bn (£2.6bn) with the lender.

Credit Suisse also warned on Tuesday that it is likely to take a financial hit from Greensill’s collapse. Its clients were among those who invested in Greensill debt. The bank said it has only recovered around $50m (£36m) from administrators so far, linked to a $140m bridging loan it handed to Greensill last year.

Brereton has not responded to efforts to contact him via LinkedIn. Greensill declined to comment on the allegations made in court documents against Brereton.

Tokio Marine declined to answer detailed questions but a spokesman said: “Tokio Marine has examined in detail the group’s relationship with Greensill and can confirm that no changes to the group’s 2020 financial forecast are necessary and that existing guidance remains unchanged.”
Add Comment