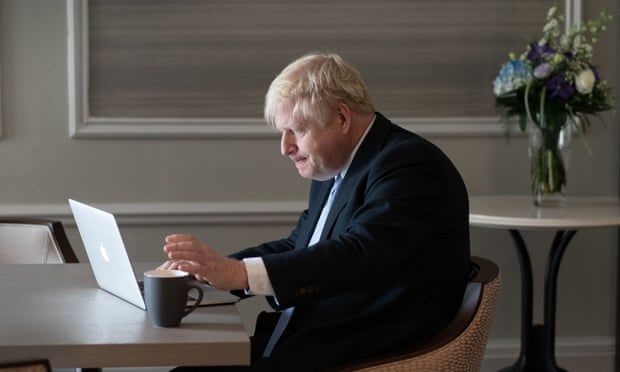 Outgoing PM expected to find new home for his old trade as journalist after Telegraph cools on his qualities
Three days before he became prime minister, Boris Johnson’s final column for the Daily Telegraph was published: a call for Britain to heed the lessons from the 1969 moon landings and embrace a “can-do spirit” while implementing Brexit.

Such political insight did not come cheap, with Johnson pocketing a £275,000 salary for working 10 hours a month on his weekly opinion pieces.

But, with the Telegraph titles having turned increasingly lukewarm on the prime minister after the Partygate scandal, it may be that Johnson will have to find a new home if he wants to return to journalism after leaving No 10.

He may have other options: multiple sources at the Daily Mail have said Johnson has been approached about writing a column for the paper when he leaves Downing Street.

Such an arrangement could cement the close links between the prime minister and the Mail titles – with potential benefits for all involved. There has been continued speculation that Johnson is preparing to give a peerage to the Paul Dacre – the editor-in-chief of the Daily Mail’s parent company – in his resignation honours list. That could go some way to placating Dacre, after Johnson failed to secure him the job of running media regulator Ofcom.

At the same time, the prime minister is looking for new sources of income, as his salary will halve to £84,000 when he leaves office. He is also dealing with the aftermath of an expensive divorce and the cost of supporting multiple children.

Downing Street declined to comment on whether Johnson had been offered a role by the newspaper, while a spokesperson for the Daily Mail did not return a request for comment.

Johnson had a long association with the Daily Telegraph, where he wrote a weekly column throughout most of his political career. He once described the £275,000 salary for this second job as “chicken feed” – but he may be in search of such scraps of income when he loses the prime ministerial salary.

The current strong relationship between Johnson and the Mail is a rapid U-turn from last autumn, when the newspaper was often critical of the prime minister under former editor Geordie Greig.

Greig was replaced by Ted Verity, an acolyte of Dacre who made clear his disdain for the previous regime. Verity’s wife, Joanne Hegarty, has been friendly with Carrie Johnson – and posted on Instagram about being invited to Number 10 by the prime minister’s wife.

In recent months the Mail has staunchly defended the prime minister over the Partygate scandal, run relentless attack pieces on Tory MPs who criticised Johnson, and done everything possible to ensure Liz Truss beats Rishi Sunak to be prime minister.

Right to the very end, the Mail continued to back Johnson even when other Conservative-supporting publications questioned the prime minister’s ability to stay in power. When he was finally forced out of office by Tory MPs, the newspaper published a front page asking: “What the hell have they done?”

On Monday, the Mail published a front-page comment calling on Tory MPs to drop a House of Commons privileges committee investigation into Johnson. Killing the inquiry would make it easier for Johnson to pursue other lucrative income streams – and ensure he isn’t kicked out of parliament in a recall byelection.

The prime minister is in line for millions of pounds in speaking fees after he leaves office, as well as money from his much-delayed biography of Shakespeare. He is also looking for a new home, after putting the Camberwell home he owns with his wife on the market for £1.6m.

If Johnson joins the Daily Mail, it would end a long association with the Daily Telegraph, which gave him a second chance as a young journalist after he was sacked by the Times for fabricating a quote. Johnson became the Telegraph’s star Brussels correspondent – writing stories about preposterous EU regulations, which paved the way for Brexit – before returning home to be a political columnist and enter politics.

Yet in recent months the Telegraph has been less than supportive on the prime minister, running critical stories and much less enthusiastic editorials than the Daily Mail.
#Boris Johnson  #Johnson
Add Comment