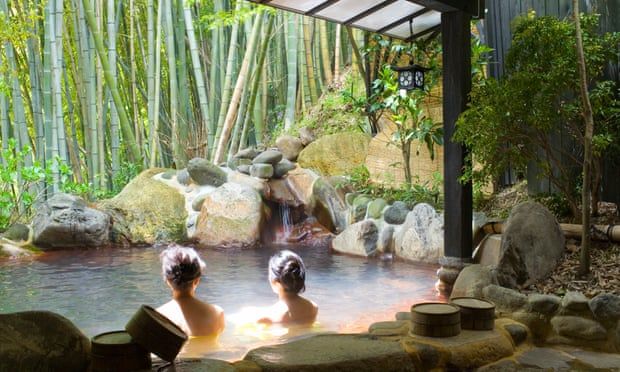 The unwelcome behaviour of some male customers is putting women off visits to hot springs, where both sexes have mingled for years

The rattle of someone sliding open the changing room door is the cue to execute a discreet turn of the head, gaze firmly directed at the steam rising towards the bathhouse’s intricate wooden rafters.

As it turns out, the precaution is unnecessary. The two bathers joining the Guardian in the restorative waters of a 140-year-old hot spring resort, or onsen, in the mountains of Japan’s Gunma prefecture were men.

Despite being open to male and female bathers for all but two hours each day – when access is restricted to women – the historical baths seemed to be mixed in name only. Over the course of four long soaks, all of my fellow bathers were male.

The absence of women seemed to confirm Japanese media reports that konyoku – mixed bathing – is at risk of becoming a cultural curiosity, especially when it requires participants to go naked.

Many blame the rising menace of wani (crocodiles) – the nickname given to men who spend long periods immersed in the water, their eyes constantly scanning the room for female bathers.

“We are at our wits’ end from day to day,” one onsen owner told the Asahi Shimbun of the constant fretting among operators over how to address the transgressions of some male bathers. 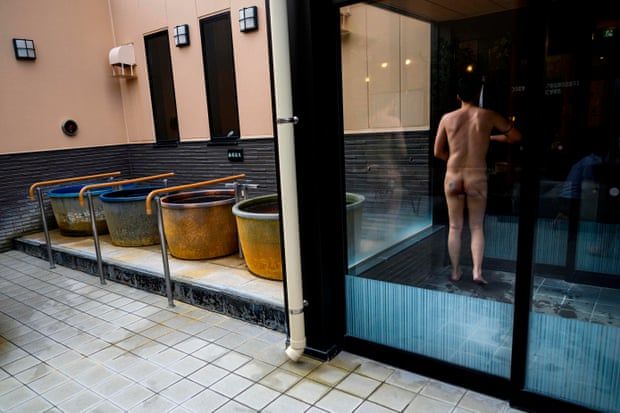 A Japanese hot spring or onsen in Yokohama, Kanagawa prefecture.

Their lurking presence is making more women reluctant to bathe with men – even family members – and is forcing the industry and its government regulators to devise new ways to protect konyoku culture.

An estimated 500 venues allow men and women to perform their ablutions in each other’s company, down from more than 1,200 in 1993.

“The problem is men,” says Yasuhiko Kobayashi, a lawyer who has written a guide to the country’s best onsen. “There are cases in which men try to strike up conversations with women, asking them where they are from and so on. You tend to get more of this after they have drunk alcohol,” he tells the Guardian.

Some have set up partitions so that, while men may be sharing the same water as their female counterparts, voyeurism is impossible. In places were semi-segregation is impossible, bathers are required to partially cover up – a restriction purists say diminishes the sense of freedom that comes with a long soak in mineral-rich spring water.

‘I don’t have to worry about being ogled’

That restriction doesn’t seem to be an issue at Sukayu, a huge outdoor hot spring resort in northern Japan, where men wear knee-length shorts and women yuami – loose shorts and a matching sleeveless top – as part of a government initiative to encourage mixed bathing.

“I don’t have to worry about being ogled,” one female bather said. “I can just sit back and enjoy the onsen.”

In a survey by regional authorities in north-east Japan – home to many hot springs – 75% of women who responded said they were put off by mixed bathing, but 81% said they no longer felt uncomfortable if all bathers were partially clothed.

Other hot springs have followed suit, with one proprietor who recently introduced a clothing rule on a trial basis suggesting the change would become permanent since it had clearly deterred bathers with “perverse motives”. Another onsen in the south-west of the country saw the number of female bathers rise from 10% to 80% after it made covering up compulsory.

“By encouraging the use of bathing garments, we’re hoping people’s concerns will be eased so they can again enjoy konyoku culture, irrespective of generation or gender,” an onsen industry official told the Yomiuri Shimbun newspaper.

Naked mixed bathing gained acceptance during the Edo period (1603-1868) and survived until 1890, when the country’s leaders imposed a ban in 1890, reportedly fearing it was sending foreign visitors – particularly puritanical Americans – the wrong message about the local population’s sense of propriety.

It underwent a revival after the second world war, when the residents of cities destroyed in US air raids had no choice but to bathe wherever hot water was available, even if that meant stripping off in front of their neighbours.

But official restlessness persisted: Tokyo banned konyoku among people aged over 10 in 1964 – the year it hosted the summer Olympics – and reduced the maximum age to seven in the 1990s.

Kobayashi, who has sampled about 3,000 onsen over the past three decades, attributes the breakdown of bathing manners to a lack of consideration for other people that now afflicts wider Japanese society.

“People think that if something is not actually prohibited, then they can do as they please,” he said. “When foreigners arrived in Japan in the late 1800s, mixed bathing was one of the things that really surprised them. But that was a time of tolerance and respect in Japan. It meant Japanese society was safe and peaceful. The decline of mixed bathing is proof that standards are declining.”

The introduction of partitions and bathing wear requirements diminishes the value of what should be an innocent shared experience, he added. “It means that onsen are losing their individual charm. That’s a real shame.”