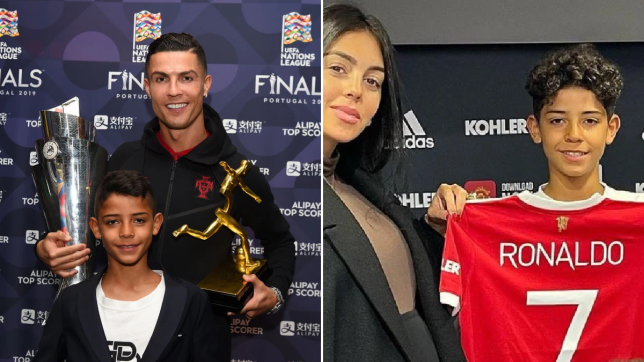 Cristiano Ronaldo’s son has officially signed for Manchester United, posing with his father’s iconic no7 shirt.

The 11-year-old has been featuring for United’s youth sides since Ronaldo Snr’s return to Old Trafford in August having previously played for Juventus and Real Madrid during his father’s spells at the European giants.

He is now officially a United player with Ronaldo’s girlfriend Georgina Rodriguez sharing snaps of the family posing for Cristiano Jr’s proud moment.

She wrote on Instagram: ‘Pursuing our dreams together. Mom loves you.’

Ronaldo recently shared an image of him putting his son, dressed in full United training gear, through his paces during the recent season break in Dubai.

In addition to Ronaldo Jr, Wayne Rooney’s son Kai also joined the United set up last year, scoring four goals in a Under-12 game against Liverpool in October.

Sons of a number of other United favourites have passed through the United academy over the years.

Phil Neville’s son Harvey came through the club’s academy before leaving to join his father at MLS side Inter Miami last year.

Charlie Savage, son of former academy player and TV pundit Robbie, recently made his senior debut for Ralf Rangnick’s side.