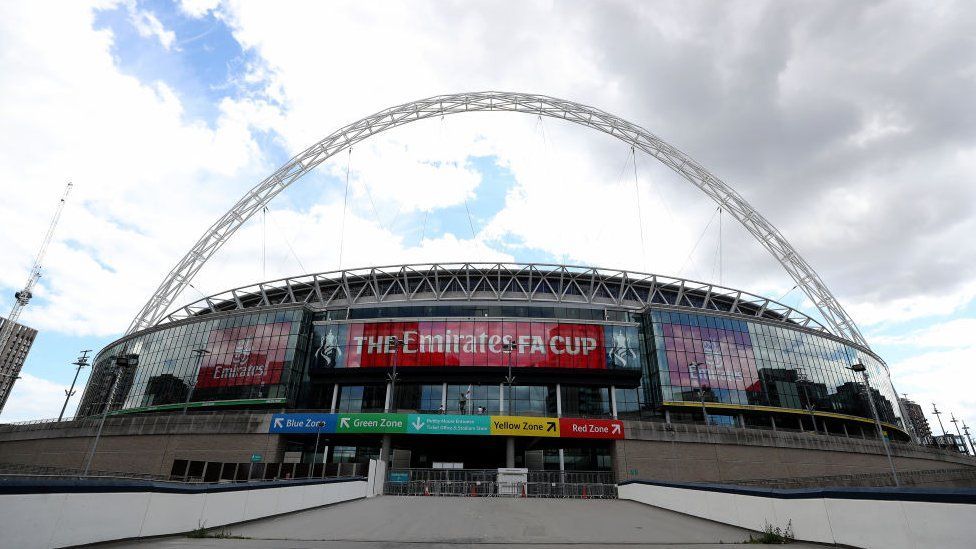 Covid: Trials to begin for return of England mass events

The government is to trial a series of measures in England, including Covid passports, to allow the safe return of sports matches, events and nightclubs.

Passes would show if a person had been vaccinated, had a recent negative test, or natural immunity.

Trial events in the coming months will also explore how ventilation and testing before and after could help crowds return.

Any use of passes would be "time-limited", the sports minister has said.

The pilots, which will include the FA Cup final, will last until mid-May, and some of the listed events will not be trialling vaccination certification, including those taking place in Liverpool.

Sports Minister Nigel Huddleston described the trials as a "learning experience", saying no decisions had yet been made on processes or vaccination certificates.

He said the earlier pilots "almost certainly won't involve any element of certification", and that the government would also be looking at mitigations such as one-way systems and hygiene measures.

Mr Huddleston said the PM would receive a report on the trials at the end of May, and suggested further events could be added later in the year.

The plans come as the UK reported another 2,297 cases and 10 deaths within 28 days of a positive test - although Wales and Northern Ireland were not reporting data.

More than 31.5 million people have received a first dose of the vaccine, and nearly 5.4m have received both jabs, according to the latest government figures. All adults are due to be offered vaccination by the end of July, the government has said.

Meanwhile, Downing Street has confirmed countries will be in a risk-based "traffic light" system when foreign holidays resume.

The pilots will include the FA Cup semi final and final in London's Wembley Stadium, the World Snooker Championship in Sheffield, a mass participation run at Hatfield House in Hertfordshire, and several events in Liverpool including an evening at a nightclub, a business conference and a cinema screening in the city.

The FA Cup final will be using certification.

The first pilot event will be a comedy night in Liverpool on 16 April where audience members will be tested for Covid before and after the show.

The University of Liverpool's Prof Iain Buchan, who will be helping run the city's trials, told BBC Breakfast taking part would involve giving consent when booking a ticket, receiving text messages about Covid safety, minimising your contacts before the event, and getting tested as close to the event as possible.

Prof Buchan added that people would be told not to attend if they developed any symptoms and the events would be held in well-ventilated places.

After the event, people would be asked to minimise their contacts and get another test five days later, for the purposes of research, he said.

Dates have been set for pilots that might determine how we get back into big events - although it was a slightly confused picture earlier in terms of exactly which venues would be trialling what.

The details, it seems, are still being ironed out. Notable by its absence from the plans, for now, is any mention of pubs.

The freedom to head to your local for a pint had become something of a focal point over fears of a "checkpoint society".

Not long ago, Boris Johnson suggested it could be up to individual landlords on whether they wanted to ask for proof of someone's Covid status.

Regardless of whether that idea's quietly on the backburner or gone for good, there's still doubt in the Tory ranks.

One MP tells me they still have plenty of reservations, although they could possibly get their head around temporary plans for larger events only. Another says they remain firmly against any kind of domestic certification.

The government, however, has given itself a bit of time to chew everything over - whether that means the results of the pilots or the political mood.

But NTIA chief executive Michael Kill called for further trials across a wider scope of businesses in the sector, expressing concern "that this will only give an acute view of the challenges faced within such unique environments where one size does not fit all".

The NHS is said to be working on a system to allow people to demonstrate their status through an app or paper certificate.

The government said it was also working with clinical and ethical experts on exemptions for people for whom vaccination is not advised and repeat testing would be difficult.

No 10 said it did not want the scheme, which it is describing as "Covid-status certification", to be used on public transport or in essential shops.

Businesses in England which can reopen in the coming weeks, including pubs, restaurants and non-essential retail will not have to use the system for now.

However, sources say requiring a certificate to access hospitality further down the line - perhaps to reduce the need for social distancing - has not been ruled out.

Prime Minister Boris Johnson said the government was doing everything it could to ensure people could return to events and travel "as safely as possible". 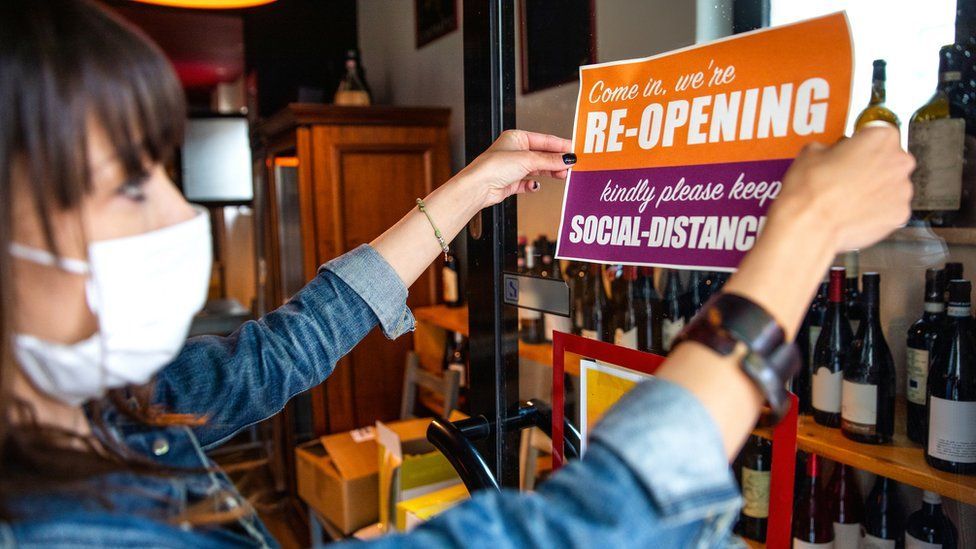 Cabinet Office Minister Michael Gove, who is leading the review into the use of Covid passports, has called certification for international travel an "inevitability".

Writing in the Sunday Telegraph, he also said it could also be a "valuable aid" in reopening parts of the domestic economy faster.

However, critics, including more than 40 Tory MPs and privacy campaigners, have suggested a Covid passport scheme could be "discriminatory and counterproductive".

Former Labour leader Jeremy Corbyn, who now sits as an independent, and senior Tory Iain Duncan Smith are among a broad coalition of MPs who have pledged their opposition.

Their concerns have been echoed by leading scientists, including infectious diseases expert Dr Mike Tildesley, who said he was "very much against the idea of domestic travel passports at the moment" when many people have not been offered the vaccine and uptake was inconsistent among communities.

He told BBC Breakfast he recognised the need for security so that mass events could resume but said we need "a fair system that isn't discriminating against certain members of society".

Prof Melinda Mills, director of the Leverhulme Centre for Demographic Science at the University of Oxford, also appeared on the programme, and said there were "still a lot of open questions" about the scheme.

They included practical questions and ethical ones, she said, such as: "Do I have to pay for the testing if I haven't been vaccinated or had that opportunity?"

The sociologist acknowledged the scheme could work as an incentive for people to get vaccinated, but added that it could also inspire forgery if paper documents are used.

While the proposed plans cover England only, the government is discussing the scheme with Scotland, Wales and Northern Ireland.

Under the government's plan to ease England's lockdown, legal limits on social contact could be lifted by 21 June, if strict conditions are met.

International leisure travel will not be allowed until 17 May at the earliest.

After this point, travellers from countries in the green category will not have to isolate, although pre-departure and post-arrival tests will still be needed.

For countries assigned red and amber, restrictions would remain as they are now, with arrivals required to enter quarantine or self-isolation.

The list of countries included in each category will be drawn up closer to the time, and the government continues to advise people not to book summer holidays abroad.

Further detail on international travel will be provided on Monday, along with information about a review into social distancing - which is examining how and when distancing requirements and the working from home guidance could be lifted, and whether Covid certification could facilitate changes to the rules. 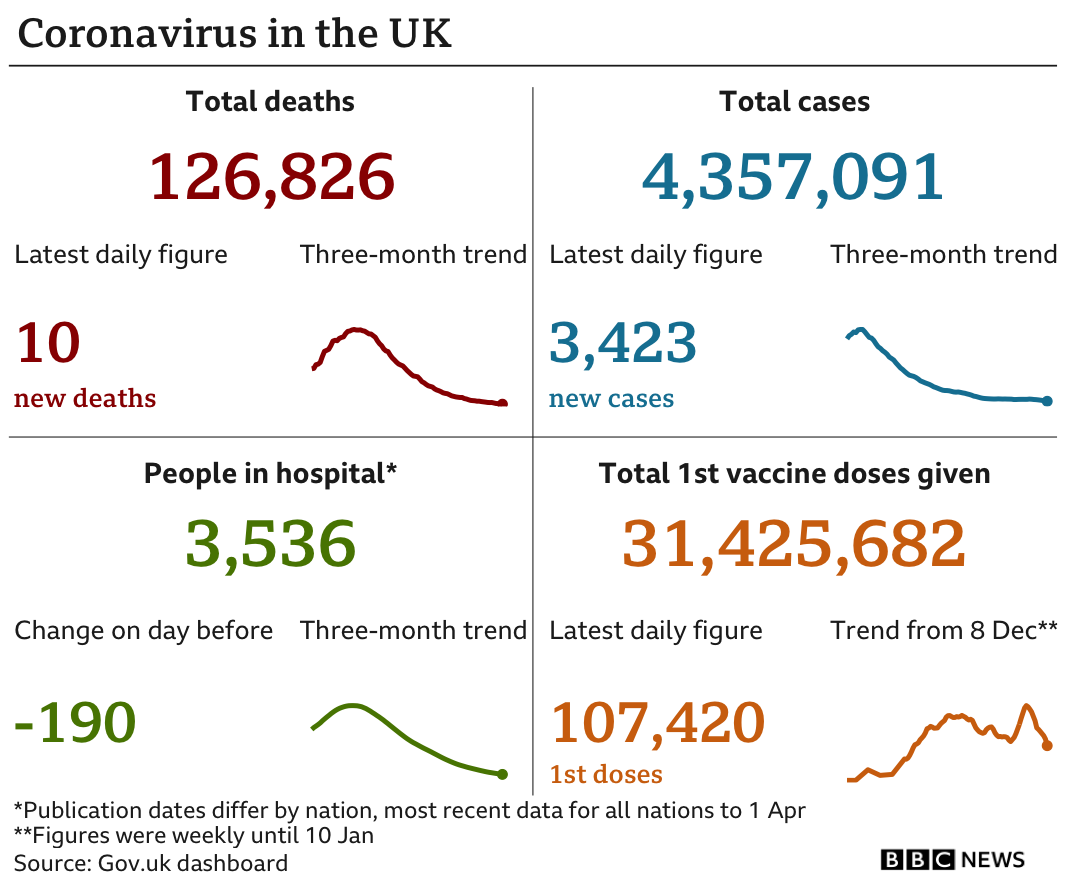