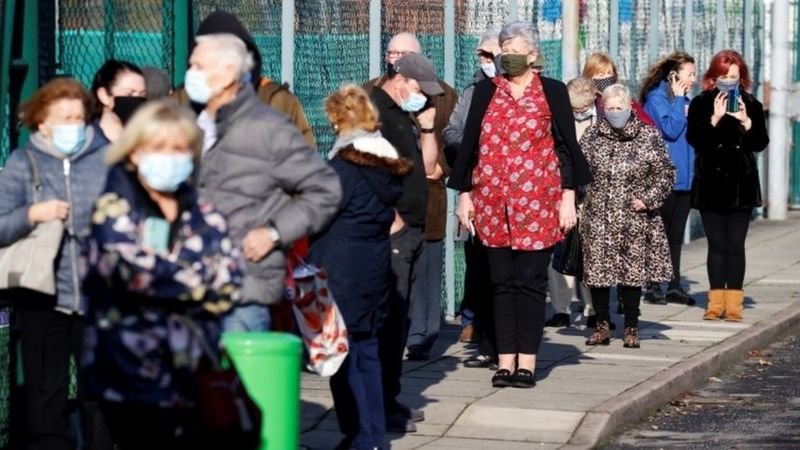 People queued for Covid tests in Liverpool as the first trial of city-wide testing in England got under way.

The city's Mayor Joe Anderson said the pilot could save lives, stop hospitals being overwhelmed and "get the city out of tier three restrictions".

Everyone living or working in the city will be offered regular and repeat tests, whether or not they have symptoms.

The pilot will last for approximately two weeks, the government said.

But Liverpool's director of public health Matthew Ashton told BBC Breakfast it could last longer, saying he wants "to make sure [the pilot is] long enough for us to be able to see the impact".

As of Friday a further 23,287 people tested positive for coronavirus across the UK and a further 355 deaths within 28 days of a positive test were reported, according to government figures. It takes the total deaths by that measure to 48,475.

People will be offered a mix of existing swab tests and new lateral flow tests, which could provide a result in 20 minutes without the need to use a lab.

New test sites have been set up across the city, in schools, universities, work places and care homes.

Six new test centres for people who do not have symptoms, at the Exhibition Centre Liverpool and at council-run sports centres, are open between 12:00 GMT and 19:00, with more sites planned.

Anyone who does have symptoms can get a swab test at one of the existing mobile testing centres in the city, which can also be accessed by those without symptoms.

About 2,000 military personnel are helping deliver the tests.

Liverpool City Council has said it is particularly keen to test health and care workers, teachers, school pupils and university staff and students, although everyone is being asked to come forward. 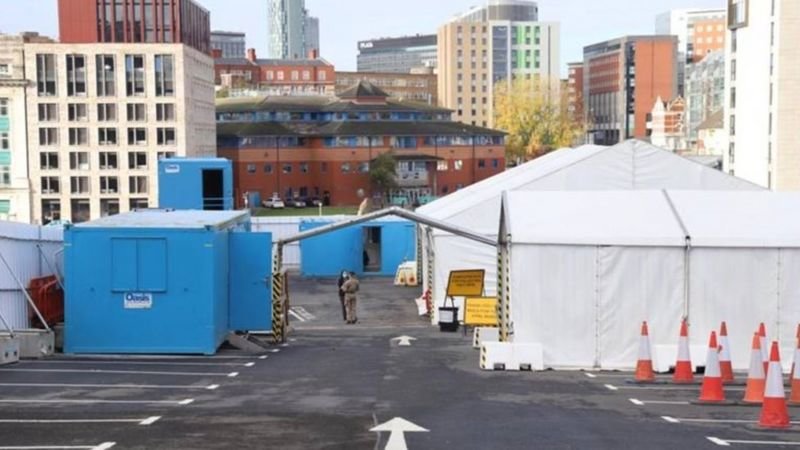 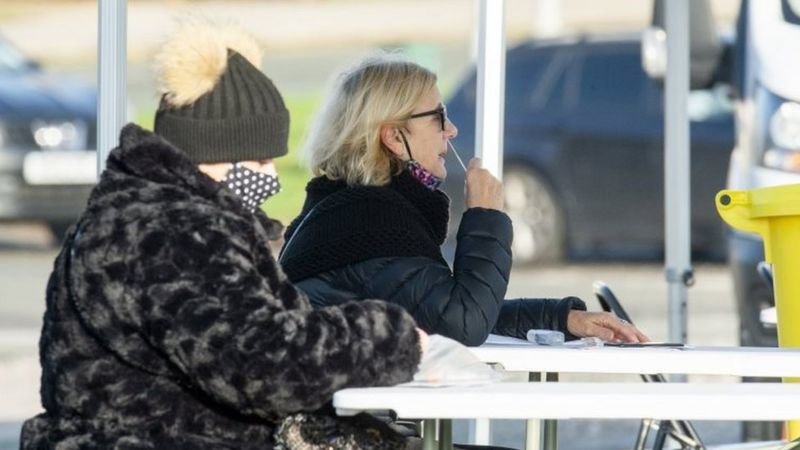 Mr Ashton said there was capacity for up to 85 testing centres to be set up by the end of the pilot, which he said was open for "an initial 10 days" and could be extended.

On the aim of the pilot, he said: "Success is lowering the levels of the virus in the city and exiting out of the national lockdown in a much stronger position."

'The queue is only getting longer'

The queue here at Liverpool Tennis Centre is snaking past the tennis courts.

One woman says she has come along because she understands how important it is.

This is one of the testing centres where people are coming without symptoms, but they still stick swabs up your nose and down your throat.

The big difference is what happens after.

Inside the centre is like a hospital ward - apart from the army is in town because this is too big an operation for the council to carry out on its own.

There are booths so you have a little privacy.

These have a little window, and out the back of the window there are trestle tables - where the army can take the swab and put them through these rapid tests.

It certainly looks like a smooth operation at the moment.

It will have to be as the queue is only getting longer.

The new lateral flow tests will detect people with the "highest viral loads" - assumed to be the most infectious people, according to Dr Emily Adams, a senior lecturer at Liverpool School of Tropical Medicine.

The scientist told BBC News that as this would detect about "three-in-four or four-in-five" cases, it was important people still follow guidelines to self-isolate if they show symptoms - and get a regular swab test.

But she said the lateral flow tests "work very well in an asymptomatic population", and that she was "optimistic" they would have a big impact in Liverpool.

Mass testing is similar to cancer screening - testing healthy people and acting early if there are any problems.

The hope is this can be used to stamp out an outbreak, by getting everyone who tests positive to isolate, without turning to strict restrictions.

China has done this on multiple occasions by mass testing everyone in a city after a cluster of cases was detected.

But a group of health experts has written to Liverpool MPs arguing that testing asymptomatic people in the city was "like searching for needles that appear transiently in haystacks".

Signatories include Allyson Pollock, professor of public health at Newcastle University, and Angela Raffle, a consultant in public health based in Bristol. 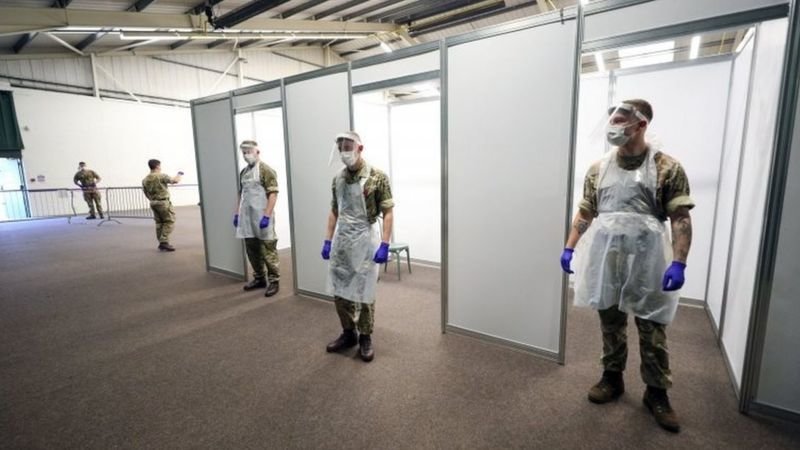 Soldiers have been deployed to help with planning, administering the tests, and offering logistical support - such as in distribution, clerical roles and as drivers 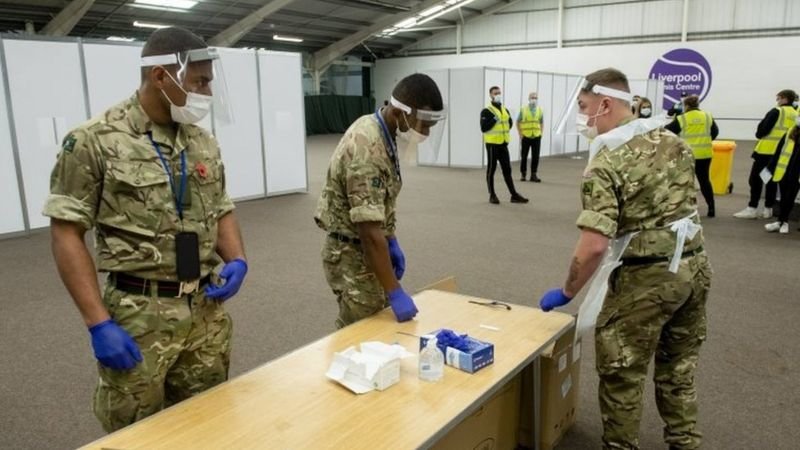 Among those getting tested on Friday was former nurse Cathleen Hodson, who said she thought it was imperative she took part in the pilot.

Liverpool Football Club manager Jurgen Klopp has shared a video message asking people to get tested, saying "do it for Liverpool", and pointing out that regular testing has helped the Premier League to continue amidst the pandemic.

According to the latest data from the Office for National Statistics (ONS), the increase in coronavirus infections appears to be slowing around the UK.

In the week to 30 October, the ONS said new daily infections in England stabilised at around 50,000. 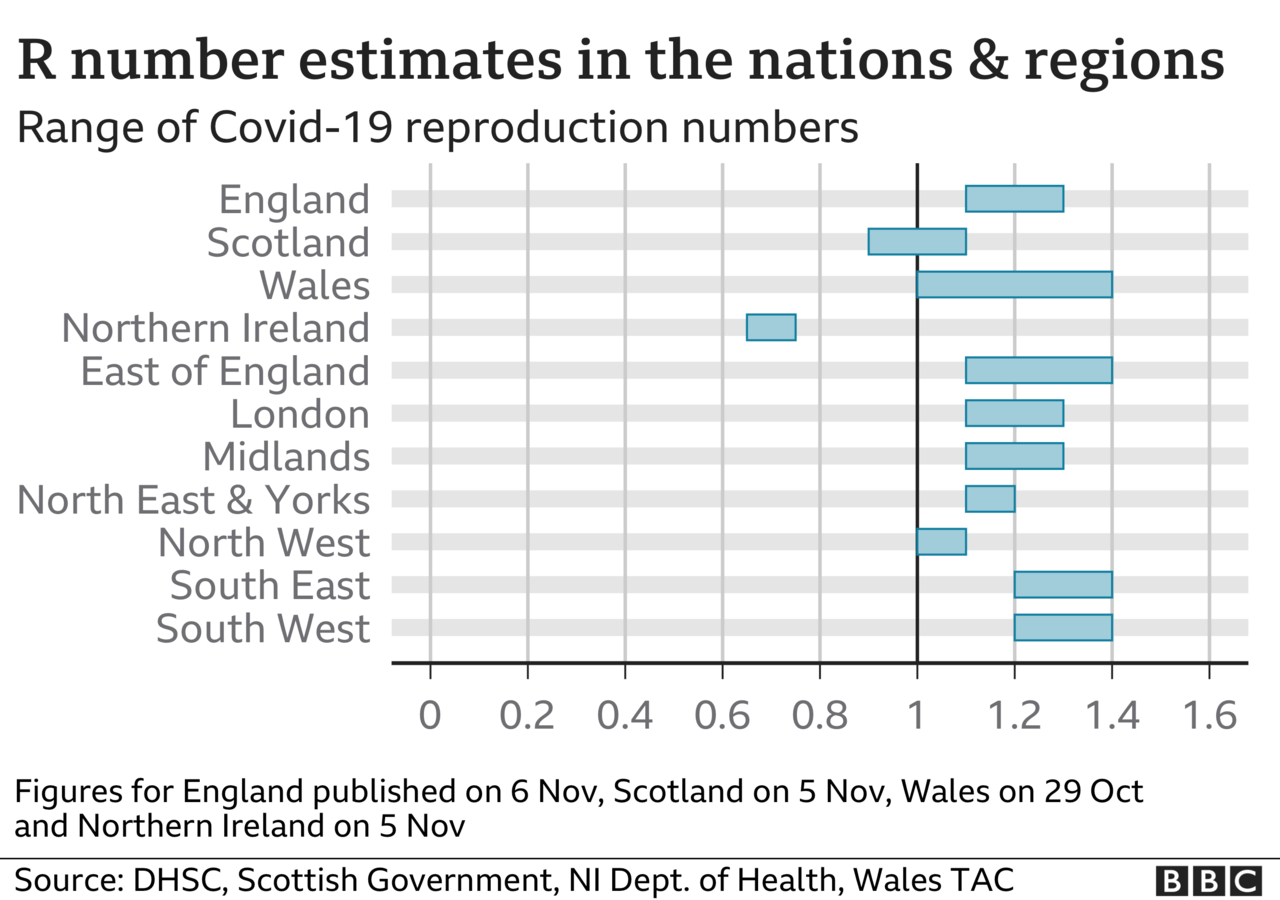 The R number - the rate at which the virus is spreading - has remained between 1.1 and 1.3, the same level as last week, government figures show. Any number above one means the number of infections is growing.

Liverpool City Region was the first area to be put into the very high alert level of England's three-tier system of Covid-19 restrictions, on 14 October. Since then, cases have fallen.

A national lockdown in England began on Thursday.

Prime Minister Boris Johnson said he was "hugely grateful" to the people of Liverpool for taking part in the pilot.