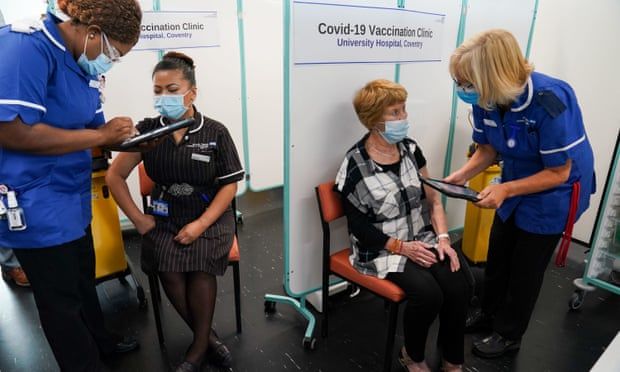 Mandatory vaccination to be introduced for NHS England’s 1.2 million full-time staff from next year

Covid vaccination is to be made compulsory for the NHS’s 1.45 million staff in England, despite criticism that forcing frontline personnel to get jabbed is heavy-handed and will lead some to quit.

However, the tough new approach will not come into force until April, after Sajid Javid heeded warnings that introducing it soon could lead to an exodus of staff during the winter, the health service’s busiest time of year.

An announcement is due imminently, the Guardian understands.

The health secretary appears to have been influenced by NHS Providers and the NHS Confederation, the two organisations that represent NHS trusts in England, strongly advising him to delay implementing the move until next year.

On Monday, Chris Hopson, the chief executive of NHS Providers, said that while a majority of hospital bosses backed jabs becoming compulsory, more than 90% of them feared it could exacerbate the understaffing that is already endemic across the service. 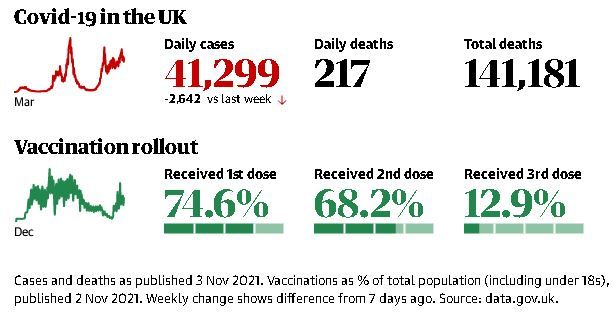 He highlighted “the potential loss of those staff who don’t take the vaccine when the service is already under huge pressure and carrying 93,000 vacancies”. He said: “The government must recognise the risk of losing unvaccinated frontline staff and support efforts to maximise voluntary take-up first.”

One senior NHS source said: “Given the NHS is a horror show just now, with unprecedented pressure all over the place, to chuck an additional spanner in the works by making Covid jabs mandatory now would be foolhardy, and Sajid Javid isn’t a foolhardy politician.”

The policy is likely to be controversial, with many NHS staff groups opposed to it.

“We do not think that making the Covid vaccine mandatory for doctors is either necessary or proportionate. So if it’s true that the Department of Health is pressing ahead with compulsory vaccination we would be very wary,” said Prof Helen Stokes-Lampard, the chair of the Academy of Medical Royal Colleges, which represents all the UK’s doctors professionally.

“While we do think that it is the professional responsibility of doctors to get the jab, when we know that more than 92% of them have already done so, you have to ask why such a heavy-handed approach is being taken, especially when this could well lead to damaging disputes at a local or national level which would be nothing more than a distraction from the real challenges the NHS workforce is facing right now.”

The British Medical Association, the doctors’ union, last week urged Javid to delay making jabs compulsory until the Department of Health and Social Care had undertaken an impact assessment to give ministers an idea of how many staff might quit if it is introduced.

Dr Chaand Nagpaul, the BMA’s chair of council, stressed the “legal, ethical and practical implications” of pressing ahead with the policy and said that “any reduction in healthcare workers could be devastating for patient services as we face a record backlog of care and winter pressures”.

Javid has already made vaccination mandatory for care home staff in England. From Thursday 11 November, anyone working in a care home will have to prove they have been double-jabbed or face being dismissed. The most recent data suggests about 90% of the sector’s 600,000 personnel have had two doses, leaving 60,000 who have not.

Social care experts have said compulsion could lead to many thousands of staff deciding to quit, worsening already chronic shortages in the service.

Some hospitals in the US have made vaccination compulsory for their staff. Last month, two hospital groups in New Jersey fired 238 workers for refusing to comply.

RWJBarnabasHealth, which runs 15 hospitals in the state, terminated the contracts of 118 personnel while Virtua Health said 120 staff had “elected to discontinue their employment” instead of getting jabbed. Neither health provider disclosed details of what types of health professionals had left over the policy.

A Department of Health and Social Care spokesperson said: “We have taken action to introduce vaccination requirements in care homes and we recently consulted on extending this further across health and other social care services. No final decisions have been made and we will set out our response in due course.

“Vaccines are safe and effective and almost four in five people in the UK have already had both jabs to protect themselves against Covid-19. It’s never too late to take up the offer and we would urge everyone who is eligible to come forward as we head into the winter months.”