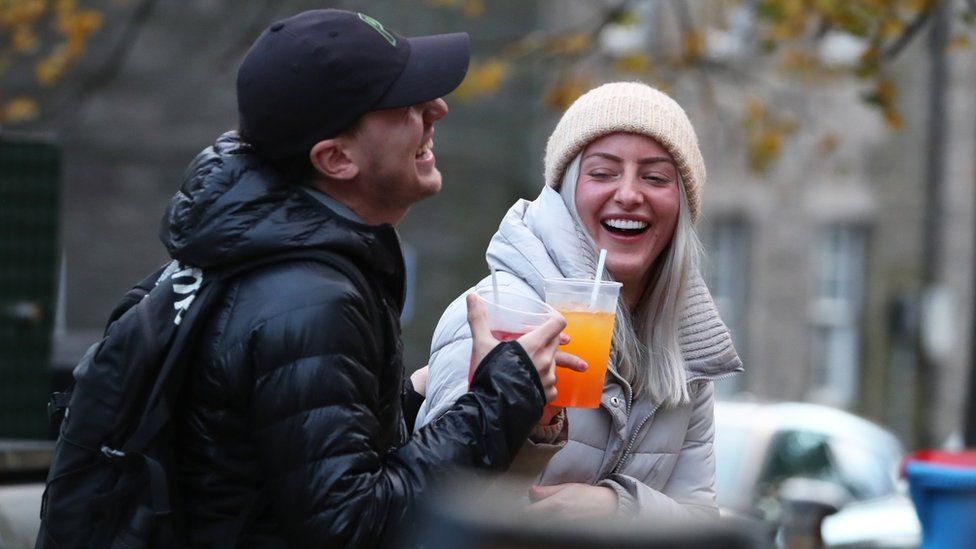 Mainland Scotland will move to level two restrictions - although it is "very likely" Moray will remain in level three after a surge in cases.

Most of the Scottish islands, except Arran, Bute, Cumbrae and Skye, will move to level one on the same date.

And a traffic light system will be introduced for international travel from Monday.

The changes, which will also allow pubs and restaurants to sell alcohol indoors, were confirmed by First Minister Nicola Sturgeon.

She also announced that the requirement for social distancing during meetings indoors or in private gardens would be dropped.

"I actually feel a wee bit emotional saying this... from Monday, as long as you stay within permitted limits, you can hug your loved ones again," she said.

The first minister added that it was "vital to be cautious".

A "more fundamental review" of physical distancing will be carried out in the next three weeks, which will look at whether there can be further relaxations in places like pubs and restaurants.

Lockdown is being eased a little faster than the Scottish government originally planned.

Allowing social mixing in your own home from Monday was anticipated, but not with the removal of social distancing rules.

As the first minister put it, you can "hug your loved ones again" - echoing a similar announcement by the prime minister, relating to England.

Scotland is also aligning with the UK government's plans to open up international travel, but taking more time to consider easing the requirements for face coverings in school.

Ending social distancing at home creates an anomaly because the rules will remain in force in other settings, including pubs and restaurants.

The Scottish government said it did not want to remove distancing rules everywhere at once, to reduce the risk of Covid flare-ups. A wider review of this policy is to report back in three weeks.

Ms Sturgeon said there were no changes at this stage to guidance on face coverings, but that their use in schools would be reviewed in the coming weeks.

She said it was "highly probable" that Moray would remain in level three when restrictions are eased in the rest of the country.

Case numbers in the area are more than four times higher than in the rest of Scotland.

"It's against that backdrop that, unless the situation was to materially improve over the next few days, it would simply not be safe or sensible to ease restrictions there from Monday," she said.

It is also expected that travel restrictions will be reintroduced, so that travel in and out of Moray would be limited to "permitted purposes only". A final decision will be taken at the end of the week.

Scotland has five levels of Covid restrictions, which range from full lockdown down to level zero.

It is hoped that the whole country can move to level one on 7 June, then to level zero on 28 June - before returning to "something much more like normality" over the the summer.

The country moved down from level four to level three on 26 April, which enabled the reopening of cafes, pubs and restaurants, gyms, and the remaining non-essential shops.

The level two restrictions have been updated so that up to six people from three households will be able to meet in their homes, and can also stay overnight.

Alcohol can be served indoors in pubs or restaurants, which will be allowed to stay open until 22:30 - and up to six adults from three households will be able to meet indoors in a public place. 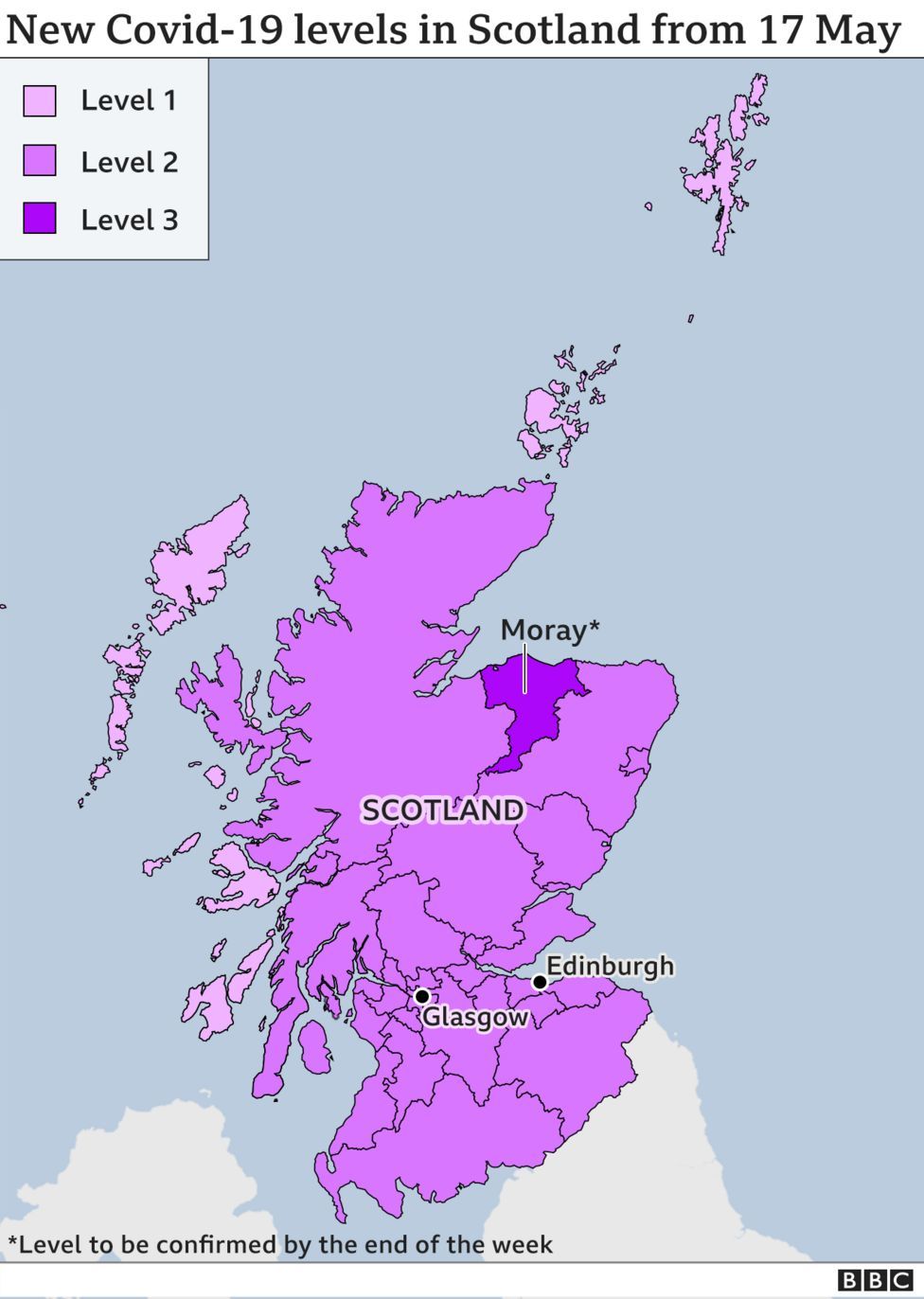 Restrictions on meeting up outdoors will ease further, to enable up to eight adults from eight different households to gather.

Adult outdoor contact sports and indoor group exercises will be able to resume.

Cinemas, bingo halls and amusement arcades are also likely to be able to reopen, and outdoor and indoor events like concerts can restart - although capacity may initially be limited.

The Western Isles, Orkney, Shetland and remote Highland and Argyll islands will move straight to level one on Monday because the virus is now sufficiently under control on those areas.

Ms Sturgeon also said there would be "a careful move away from blanket restrictions" on non-essential overseas travel.

She said the introduction of a traffic light system in Scotland meant there would be a consistent four-nations position. 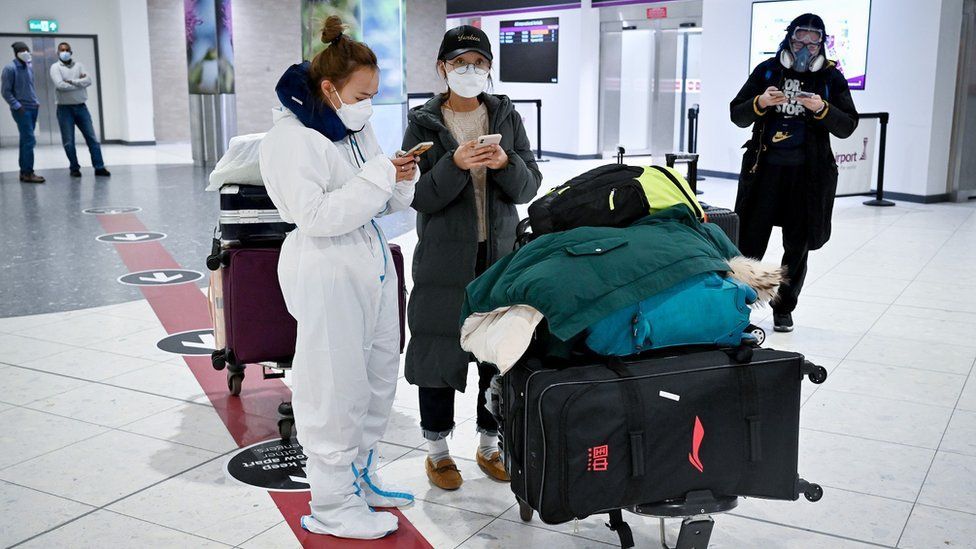 The existing system of managed isolation will continue to apply to those arriving from countries on the red list, while those travelling from amber list countries must undertake a 10-day period of self-isolation with two PCR tests.

People arriving from green list countries will be required to take a test when they arrive, but will not need to self-isolate if they do not have the virus.

Ms Sturgeon said green list status should be the "exception not the rule". Iceland, the Faroe Islands, New Zealand and Australia are among the 12 countries and territories initially on the list.

"Even though the rules on non-essential travel are starting to change, that doesn't mean we're saying that non-essential international travel is desirable," she added.

"Everyone should think seriously about whether they should travel abroad this summer.

"When it comes to holidays abroad, my advice continues to be to err on the side of caution and to staycation this summer."

The easing of restrictions was welcomed by the travel and tourism sectors, as well as Scotland's business groups.

Dr Liz Cameron, the chief executive of the Scottish Chambers of Commerce, said those sectors still "gridlocked in uncertainty" needed to re-open as quickly as possible.