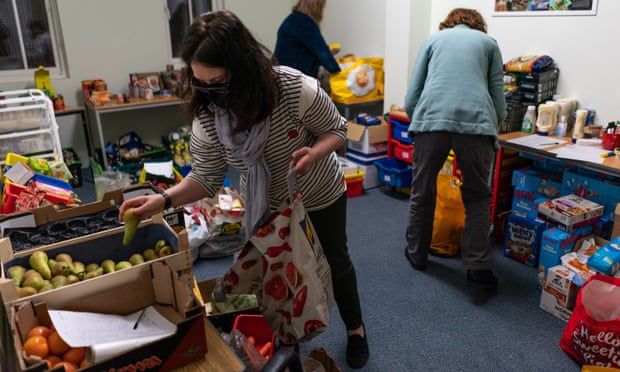 Cost of living for UK’s poorest could be 10% higher by autumn, thinktank warns

The chancellor will deliver his spring statement on 23 March. He is reluctant to commit to significant extra spending, but Treasury sources concede he has acknowledged the necessity to take some limited action.

Options could include increasing benefits in April by more than the planned 3.1%, a new cut in the taper rate for universal credit so that claimants keep more of their earnings, or an increase in the national insurance threshold.

Labour and many Conservative MPs have urged Sunak to scrap the 1.25 percentage point rise in national insurance contributions, earmarked for health and social care, but government sources insist it will go ahead as planned next month.

The Resolution Foundation said the public finances look healthier than expected at the time of the autumn budget, with borrowing on course to be £30bn lower than forecast.

However, the economic outlook has deteriorated significantly. At the time of the budget, inflation was expected to fall back later in the year. Instead, the Resolution Foundation said food and energy prices were likely to continue to be driven higher, pushing inflation to a “second peak” above 8% in the autumn.

With the poorest tenth of households spending twice as much of their budget on food and fuel as the richest, they are likely to be hardest hit, experiencing an inflation rate of perhaps 10%.

James Smith, the research director at the thinktank, said: “The chances of a living standards recovery this year are receding as rapidly as inflation is rising, and the risk of another recession is looming into view. The chancellor will therefore need to make some tough, and potentially expensive, choices in how to respond.”

Separate analysis by another thinktank, the New Economics Foundation (Nef), suggests that even by April almost half of all children will be living in households that are unable to meet the cost of some basic necessities.

Nef found that a third of households, or 23.4 million people, would have to cut back on some basics, such as food or heating, as their income falls short of what they would need to provide a decent minimum standard of living – typically by as much as £8,000. As many as 48% of all children will fall into households in this category, Nef calculates.

Sam Tims, an economist at Nef, said: “The cost of living is increasing faster than at any point in recent history. While all families are set to feel a squeeze come April, the lowest-income households will be hit proportionately harder. There is little time left for the chancellor to take action to avert the worst real-terms incomes squeeze in 50 years.”

Nef’s projections are based on the minimum income standard – the budget needed to afford what members of the public believe are essentials. It is calculated by Loughborough University’s Centre for Research in Social Policy.

The consumer expert Martin Lewis said last week that some families would “simply starve or freeze” as a result of unmanageable increases in their cost of living, particularly driven by energy prices.

Sunak announced measures in February aimed at cushioning the blow, as the energy regulator, Ofgem, announced that the price cap that puts a ceiling on average bills would rise by almost £700.

His package included a £150 council tax rebate for properties in bands A to D, and a £200 cut in energy bills from October, to be paid back over five years.

However, the scheme was predicated on energy bills falling back again from next year, something that has now been thrown into doubt. It emerged last week that the business secretary, Kwasi Kwarteng, had been asked by Downing Street to draw up options for beefing up the scheme, though these would not be enacted until the autumn.

Meanwhile, the shadow transport secretary, Louise Haigh, warned that rising global oil prices in the wake of Russia’s invasion of Ukraine meant the average family would spend an extra £386 on petrol in the year ahead.

“This is a savage extra cost for millions of working people,” she said, renewing Labour’s call for the government to impose a windfall tax on oil companies profiting from surging prices.

“The Conservatives could help working people being hit hard by soaring prices; instead they’ve rejected the choice of a one-off windfall tax on oil and gas producers raking in billions. And to add insult to injury, within weeks they want to clobber families with a huge tax hike,” she added.

The Liberal Democrat leader, Ed Davey, used his speech at his party’s spring conference in York on Sunday to renew his call for a VAT cut as a response to surging inflation.