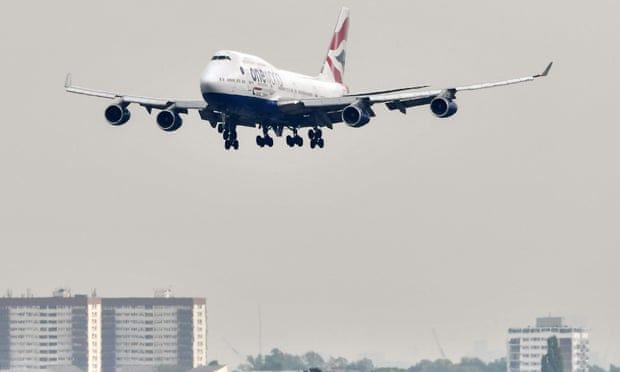 Exclusive: chancellor to boost green credentials by hitting environmentally damaging long-haul flights
Travellers to destinations including Australia, South Africa and Japan can expect to pay more to fly, as Rishi Sunak prepares to overhaul air passenger duty in next week’s budget to reflect the environmental damage wrought by long-haul flights.

The chancellor is keen to burnish his green credentials after a week in which he was accused of failing to back Boris Johnson’s net-zero pledges with sufficient resources.

It is understood that he will announce that a reform of the tax, mooted earlier this year, will go ahead, with a higher rate levied on the longest journeys.

Air passenger duty (APD) is paid by airlines, who tend to pass much of the costs on to their customers.

It is currently charged in two bands, to destinations under 2,000 miles and above 2,000 miles, with business class passengers paying more. The maximum levied per passenger is currently due to rise to £554 next April.

In a consultation document published alongside the March budget, the treasury set out several options for reforming APD. Its favoured approach was a new, three-band structure, with destinations more than 6,000 miles away facing the highest charge.

There is also expected to be a new, lower rate for domestic flights. Such a move is likely to be sold as encouraging levelling up and protecting the Union by fostering connectivity between the nations and regions – though it could be controversial where there are viable public transport alternatives such as train routes.

Environmentalists are likely to reject reforms of APD as much too modest to have an effect on curbing the demand for polluting flights.

The New Economics Foundation (NEF) thinktank has called instead for a frequent flyer levy that would see regular air passengers pay more for the second and subsequent flights they take in a year. NEF research shows that 15% of people take 70% of flights.

Ministers published a “jet zero” strategy in the summer aimed at reducing emissions from air transport, but it is widely regarded as a more difficult challenge than cutting pollution from car travel or domestic energy.

The government is keen to demonstrate that it has a coherent plan for hitting its decarbonisation targets, ahead of the critical Cop26 meeting opening next week in Glasgow.

Sunak is expected to present his budget as rebuilding the economy and boosting its resilience after the tough pandemic period – but he is also likely to acknowledge challenging headwinds, including volatile global energy prices and supply shortages.

The chancellor has also made clear in recent weeks that he is concerned about the increasing risk of inflation, which the Bank of England’s chief economist Huw Pill has suggested could top 5% in the coming months.

That could see consumers facing what Labour has called a “cost of living crisis”, with energy bills increasing, national insurance contributions set to rise in April and universal credit cut by £1,000 a year for millions of low-income families.

Treasury sources denied reports of a VAT cut on domestic fuel bills to help families cope with the soaring costs of heating their homes, but the chancellor could opt for more targeted measures to cushion the blow for some households.
#Boris Johnson  #Johnson
Add Comment