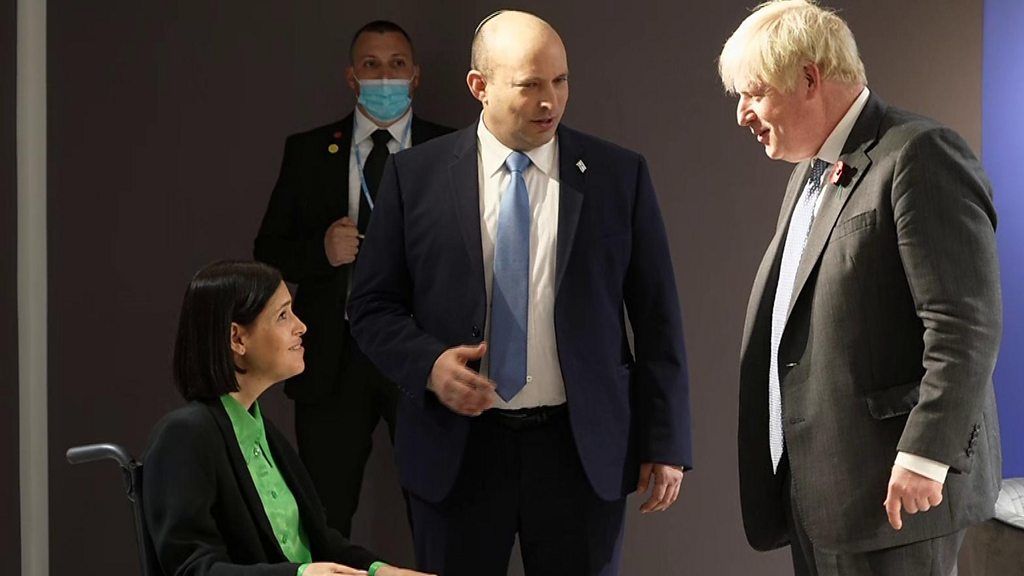 Boris Johnson has apologised to an Israeli minister who was unable to access COP26 in her wheelchair.

Karine Elharrar was forced to return to her hotel 50 miles away on Monday after waiting outside for two hours.

The UK prime minister told her he was sorry for the "confusion" when the energy minister joined a meeting with him and Israel's PM, Naftali Bennett.

Mr Bennett thanked his British counterpart for his "quick intervention on this unfortunate incident".

And he called it a "learning opportunity for all of us in the importance of accessibility for all", a statement backed by Mr Johnson.

Ms Elharrar - who has muscular dystrophy - told BBC News she had gone into the climate summit on Tuesday "very easily" and it was "quite a different experience".

But she said Monday's incident had been "a good experience to make sure the next UN conference will be accessible".

The minister added: "We can talk about accessibility and the rights of people with disabilities, but in life we need to implement all the conventions and all the regulations and that was an experience that showed that we need to pay attention to all the details everywhere.

"I am sure it will be different in the future."

Earlier, the UK's Environment Secretary, George Eustice, said the incident involving Ms Elharrar was "deeply regrettable" and that the UK government had apologised.

But disability charity Scope said it was "inexcusable" and the organisers "should have seen this coming".

Mr Johnson's apology has coincided with Purple Tuesday - an awareness day set up to make organisations improve the experience of their disabled customers.

Mr Eustice appeared to blame the Israeli delegation for the fact Ms Elharrar could not get into the venue, telling BBC Radio 4's Today programme: "What would normally happen in this situation is that Israel would have communicated that they had that particular need for their minister.

"There was obviously something that went wrong in this instance and they weren't aware of that so they hadn't made the right provisions at that particular entrance she was coming too."

He added: "I know that at most of the other entrances there [is] wheelchair access there. It was because she obviously came to an entrance that didn't have that provision."

But a spokesman from the Israeli Embassy in London said the country's delegation to the summit had "communicated over the past several weeks all the details about the minister's requirements".

Mr Eustice faced some criticism for the remarks, with Lib Dem peer Lady Ludford tweeting: "Not the most gracious of responses for the COP26 host to blame the guest."

On Monday, Ms Elharrar told Israel's Channel 12 that she could not get onto the grounds of the conference because the only options were to either walk or take a shuttle that was not suitable for a wheelchair.

Her office told the Times of Israel she waited outside the venue in Glasgow for two hours, and she was eventually forced to return to her hotel in the Scottish capital Edinburgh 80km (50 miles) away.

On Monday, she tweeted that it was "sad" the UN "does not provide accessibility to its events".

And an official in Israeli Prime Minister Naftali Bennett's delegation said they had formally complained to organisers.

Reacting to the incident, Alison Kerry of Scope said: "It is inexcusable that the organisers of COP26 haven't made all of their venue accessible for disabled people.

"No one should be excluded from participating in an event that is addressing one of the biggest issues of our time."

She added: "The organisers should have seen this coming. With one in five of us being disabled, it should come as no surprise that a venue hosting tens of thousands of delegates will need to make a significant number of reasonable adjustments.

"It's high time accessibility is built in from the start and not an afterthought."

The organisers of COP26 told the BBC that the main venue was fully wheelchair accessible, while temporary structures built around it had all undergone accessibility checks and were fully compliant.

A COP26 spokeswoman said: "This was a genuine mistake and we have apologised to Minister Elharrar -we look forward to her attendance at COP26 today [Tuesday].

"We remain committed to an inclusive event accessible to all and the venue was designed to facilitate that."