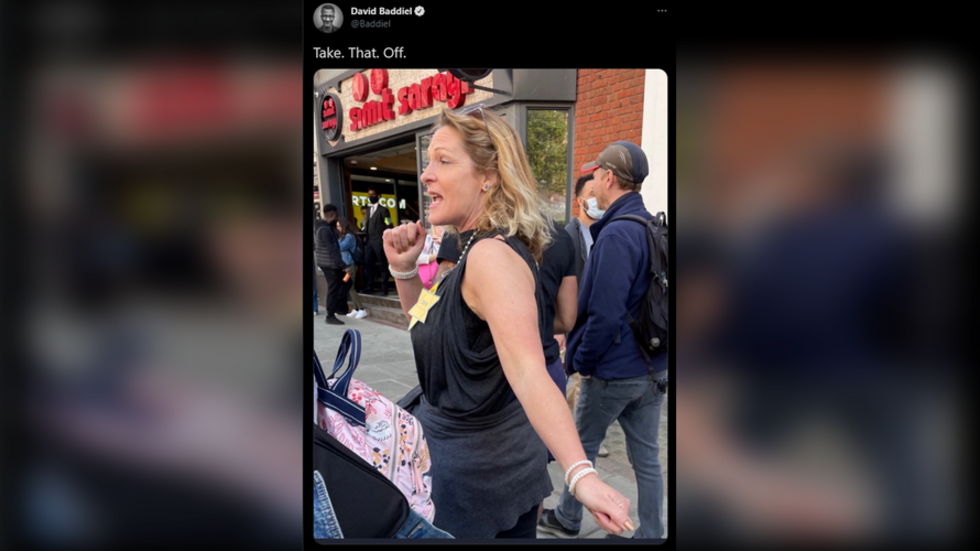 Photographs of several people wearing Star of David badges during a massive anti-lockdown demonstration in London have riled social media users, many of whom thought the gimmick was in extremely poor taste.

Purportedly taken at Saturday’s protest against Covid-19 restrictions in the UK capital, the photographs began circulating on Twitter, appearing in trending hashtags such as “Holocaust,” “Anti-lockdown” and “Covidiots.”

In one photo, a man is seen wearing a badge saying “Vacc. ID,” while another pair of presumed protesters sported yellow stars that read: “No Covid certificates.”

In a separate photo, a woman is seen with a sweatshirt that states: “Will you let this happen again?” alongside a Star of David that says “Covid.”

A woman who shared one of the photographs claims that she was called a “Nazi” for wearing a mask, after having confronted a protester about his badge.

The images did not sit well with Internet observers. One Twitter user said that the “scum” were trying to suggest that “lockdown and masks are equal to what happened to the Jews during the Holocaust.”

The badges are “disgusting” and “disrespectful,” another social media user noted, a sentiment that was echoed by countless other commenters.

Others suggested that the individuals should be identified and that their employers should be made aware of their behaviour.

The official Twitter account for the Auschwitz Memorial also weighed in, arguing that repurposing the badges to lobby against vaccines is a “sad symptom of moral and intellectual decline.”

Reactions on Twitter seem to suggest that the protesters had taken their opposition to vaccine IDs too far, but the proposed document has faced fierce opposition, with critics arguing that such documents would be discriminatory and a serious invasion of privacy. Although initially insisting that vaccine certificates were off the table, the UK government has signaled that proof of vaccination will likely be required to travel abroad. And, while some lockdown restrictions have begun to ease, authorities have floated the idea of preventing unvaccinated people from patronizing pubs.

The proposal has already been implemented in other parts of the world. In Israel, fully vaccinated people have been given “green badges” which grant them entry to certain businesses and venues.

The concept is particularly controversial because the current vaccines on the market have only been approved for emergency use and have not completed trials, meaning that taking an experimental drug would essentially be required in order to carry out normal, day-to-day activities.

It’s unclear how many people wore the badges during Saturday’s event in London. Images and eyewitness accounts have suggested that tens of thousands of people marched through the city. Scant media coverage of the demonstration has prompted many to accuse mainstream outlets of participating in a near total information blackout.

This isn’t the first time that vaccine passports have been compared to badges forcibly worn by Jews in Nazi Germany. Last month, the Libertarian Party of Kentucky tweeted out an anti-vaccine certificate message which alluded to the infamous badges.