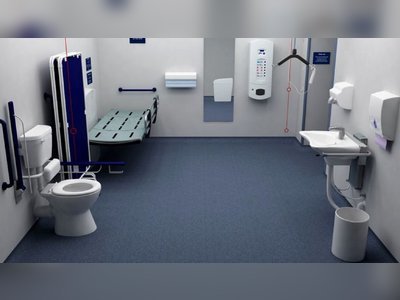 Changing Places toilets for disabled people to be compulsory

Large accessible toilets for severely disabled people - known as Changing Places - will be made compulsory for new buildings in England from 2021.
View full article

Edgar Dowell 228 days ago
Make these available for others as well. My wife had Parkinson's and I was her caregiver. She needed my help and it was often difficult to locate a washroom for her. As she progressed through the stages of Parkinson's and the dementia her ability to take care of herself deteriorated. It was after she could not figure out how to get out of a stall and I had to climb over the wall to get inside and unlatch the door that I could no longer allow her to go it alone with me waiting outside. Many, many times I had to have staff member at a business stand by the door to a multi stall washroom keeping other people out or enlist the help of a stranger to do the same. Sometimes there were family washrooms or single washrooms, but even then they were not always accessible. On one occasion I stopped at a petrol station and asked for the key to the washroom and the attendant told me the washrooms were only for customer use. I decided to leave rather than enunciate what was on my mind about this mean spirited person. Although I had not been to this particular gas station, I have purchased gas at other gas stations of the same brand, hundreds, if not thousands of times over the last 58 years and not used their washroom facility. I would have been a customer after the priority item was addressed. I went elsewhere down the road.
Families with small children should also be permitted to use these rooms and adding a changing table for infants would be a great asset. Businesses that cater to families should be required to have at least one of this types of room.
London Daily
UK
Business
Health
Technology
Add Your News
×