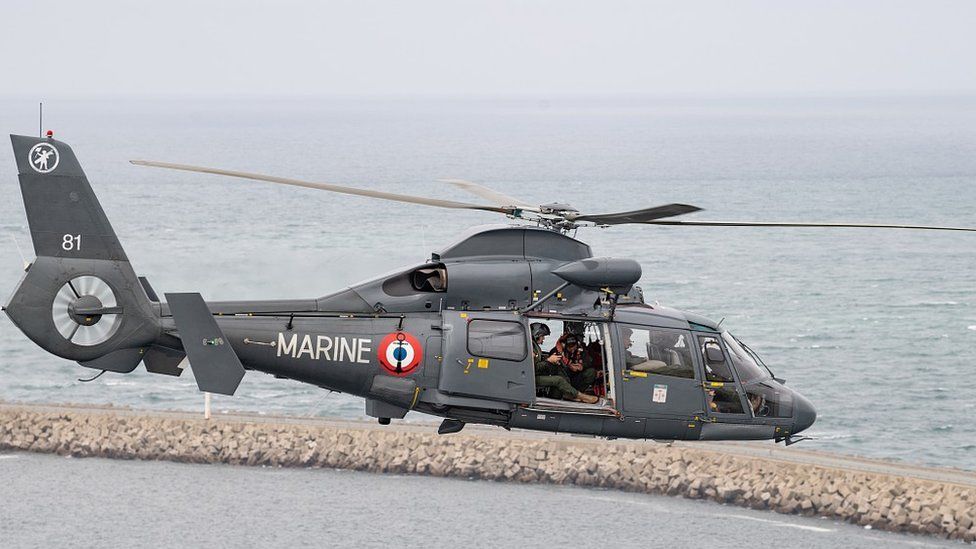 Nearly 600 migrants crossed the Channel on the same day a man died making the journey, the government has confirmed.

The Home Office said UK authorities dealt with 592 people on Thursday - the highest figure for a single day.

French authorities reported more than 160 rescues on Thursday after several boats got into difficulty.

Prosecutors in France have begun a manslaughter investigation into the death of the Eritrean man after he was winched from the sea.

Nikolai Posner from migrant charity Utopia 56 spoke to survivors in Dunkirk. He said the 27-year-old jumped in to lighten the load of the sinking vessel he was on, as his 22-year-old girlfriend watched.

About 40 people were on board the boat when it began to go down, prompting a huge emergency response in one of the busiest shipping lanes in the world.

French authorities believe the man, who was taken to hospital in Calais, suffered cardio-respiratory arrest.

The Home Office has confirmed 592 people were rescued or intercepted during 16 incidents dealt with by the UK on Thursday, and said the French intercepted 18 crossings, preventing 420 people from setting out on the journey.

With travel by planes, trains and ferries restricted, arrivals by boat increased from about 4% of applications to a peak of 44% last calendar year.

"Last Thursday's death is a tragic reminder of the importance of stopping migrants from leaving the safety of France on these dangerous crossings.

"The government's New Plan for Immigration is the only long-term solution to fix the broken system, tackle the criminal gangs and prevent more tragedies."

But Lisa Doyle, director of advocacy and engagement at the Refugee Council, said: "The government must change its approach. Instead of seeking to punish or push away people seeking safety because of the type of journey they have made to the UK, they must create and commit to safe routes."

She said: "While there is war, persecution and violence, people will be forced to take dangerous journeys to seek safety.

"We are talking about ordinary men, women and children who are forced to flee their home through no fault of their own."