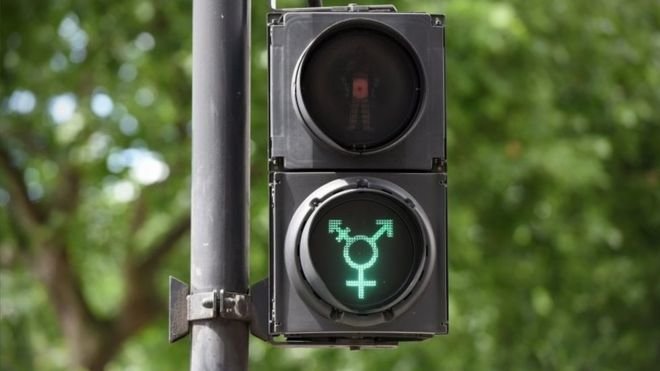 Ministers have ruled out changes to make it easier for transgender people in England and Wales to have their gender legally recognised.

They have rejected calls for people to be able to self-identify their gender and change their birth certificates without a medical diagnosis.

Ministers said reform of the 2004 Gender Recognition Act was not the "top priority" for trans people.

The UK's equalities watchdog said it was a "missed opportunity".

But women's rights groups applauded the decision as a "victory for fairness and common sense".

Ministers are pledging action to make it easier for trans people to obtain a Gender Recognition Certificate and to improve healthcare services for them.

But LGBT groups had urged them to go much further, by making it easier for people to legally transition from their birth sex and to provide greater protection under the law.

Currently, the Gender Recognition Act requires trans people to go through a long process in order to change their birth certificates.

A "self-ID" process, allowing changes to birth certificates without a medical diagnosis, was one of the ideas put forward in a consultation undertaken by the last Conservative government, led by Theresa May.

Of the 102,818 responses received, 64% said there should not be a requirement for a diagnosis of gender dysphoria in the future, on the grounds that being trans was neither a medical nor a mental health issue.

But, in a statement, Equalities Minister Liz Truss said she believed the law as it stood provided the right "checks and balances".

"We want transgender people to be free to live and to prosper in a modern Britain," she said.

"It is the government's view that the balance struck in this legislation is correct, in that there are proper checks and balances in the system and also support for people who want to change their legal sex.

"We have also come to understand that gender recognition reform, though supported in the consultation undertaken by the last government, is not the top priority for transgender people."

It's now nearly three years since Theresa May talked about "de-medicalising" the gender recognition process.

And it raised hopes, in some quarters, that fundamental reforms were on the way.

Elsewhere, it raised fears that women's rights were set to be eroded.

And as that debate raged, ministers seemed to retreat from the scene, unwilling or unsure about how to publicly deal with this political 'hot potato'.

And although an official response remained missing in action, it did increasingly become clear that Boris Johnson's administration was unlikely to back what's known as self-ID.

Now, finally, ministers have made up their mind.

It's a no to changing the law - albeit a yes to cutting the costs of the process.

And there are promises to try and address some very real concerns about healthcare.

While that move will be welcomed by many, such measures may also be perceived as a way of trying to sweeten the pill for those who are disappointed about the lack of legal reform.

After the drawn out delays in Whitehall - and divisive debates in some communities - it's very doubtful that this government will seek to delve into the self-ID debate again any time soon.

Ms Truss said the 2010 Equality Act, landmark legislation passed towards the end of the last Labour government, "clearly protects" transgender people from discrimination while allowing service providers to restrict access to single sex spaces on the basis of biological sex if there is a clear justification.

The government is pledging to cut the time involved in applying for a Gender Recognition Certificate, making the process "kinder and more straightforward", as well as reducing the £140 cost to a "nominal" amount.

And it is also promising to cut waiting times at NHS gender clinics.

The Equalities and Human Rights Commission welcomed the steps but said it regretted the fact that ministers had passed up an opportunity to "simplify the law".

"There is more to be done to increase understanding in wider society and address the divisive public dialogue in this space," a spokesman said.

Stonewall, which campaigns for equality for lesbian, bisexual, gay and trans people, said the "minimal administrative" changes being proposed were totally inadequate. 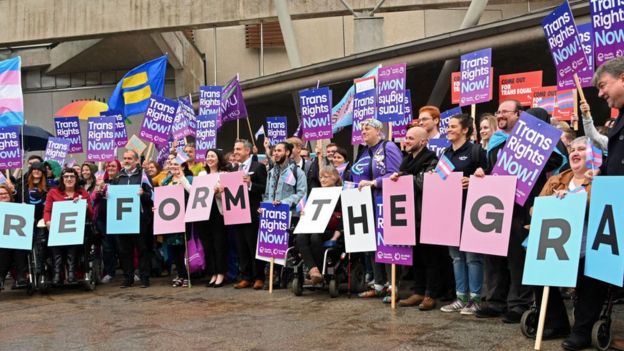 "While these moves will make the current process less costly and bureaucratic, they don't go anywhere near far enough toward meaningfully reforming the Act to make it easier for all trans people to go about their daily life," said the organisation's chief executive Nancy Kelley.

And, in a joint statement, Amnesty International UK, Liberty and Human Rights Watch said it was a "missed opportunity" to ensure the law kept pace with "human rights standards".

"Research has found that medical barriers to gender recognition for trans people are unnecessarily intrusive and can harm their physical and mental health," the three organisations said.

"With medical requirements still in place, trans people will continue to be forced through harmful processes to have their gender legally recognised."

But Fair Play for Women, a group committed to defending the sex-based rights of women, said Ms Truss had made the right decision.

It said the government had "acknowledged women are stakeholders too and policies must fairly balance the conflicting rights of trans people and women".

"Trans people in the UK have some of the strongest legal protections in the world. That does not change today."

In Scotland, plans that would have allowed trans people to self-identify have been put on hold following criticism from across the political spectrum, including from within the SNP.

A draft bill published by the Scottish government in December would have removed the requirement for people to provide medical evidence of their diagnosis of gender dysphoria.

No change is now expected before next year's Holyrood elections although Scottish minsters say they remain "committed" to updating the law so people can get a gender recognition certificate without "unnecessary stress".