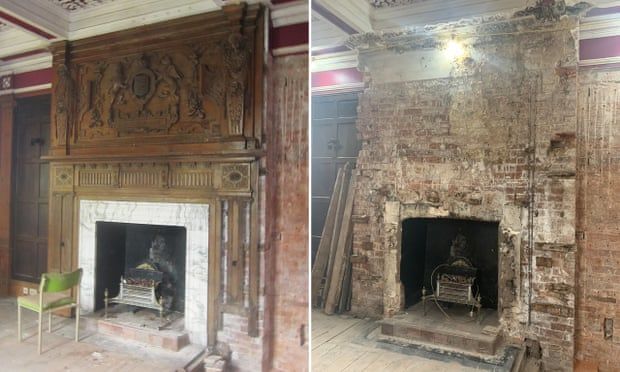 Brian Wilson tells tribunal he tossed overmantel from Seighford Hall on to a pile of firewood, before giving it to an antiques dealer
The caretaker of a stately home in Staffordshire gave away a rare Tudor carved panel worth up to £5m because he thought it was rotten, an employment tribunal has heard.

Brian Wilson took the 450-year-old overmantel from the Grade II-listed Seighford Hall and tossed it on a pile of firewood, before giving it to an antiques dealer who later tried to sell it.

Wilson, who lived in a caravan in the grounds of the 16th-century manor house near Stafford, was found to have committed gross misconduct and dismissed.

The building had previously been used as a nursing home, which ceased operating in 1998, and Wilson was employed to live on site and manage security and maintenance of the property.

After his sacking he took his employer, Seighford Hall Nursing Home Ltd, to a tribunal for unfair dismissal.

Employment judge Kate Hindmarch ruled the sacking had been “procedurally unfair” as Wilson had not been made aware of the decision to fire him. She awarded him £4,066 in unlawful deduction from wages and untaken holiday pay but ruled he was not entitled to any additional compensation for his sacking.

Wilson admitted removing the carving without consent, claiming it was “in very poor repair”, and said he placed it on a “fire pile” before allowing it to be taken away by Andrew Potter, an antiques dealer.

“I let him have it. As far as I was concerned it was less rubbish for me to get rid of,” Wilson said.

Potter planned to turn the carving into a headboard but was alerted to its potential value and put it up for auction last year. Stafford borough council went to court to stop Whitworth Auctions from selling the piece.

Wilson’s actions came to light when a building surveyor came to inspect the property and was told by Wilson there had been an overnight break-in with items, including a tractor, fireplaces and the oak overmantel, being stolen.

Christopher Smith, the managing director of the hall, formally reported the theft to the police after being told there was no crime reference number linked to an alleged break in, the Times reported.

Wilson was asked to attend a meeting about selling items without authorisation, but did not attend, saying he never received the invitation letter as he had moved home. He was subsequently sacked in November 2020.

Wilson denied receiving money for the tractor, or removing the fireplaces, and said he placed the overmantel in a “fire pile” because it had a fungal infection.
Add Comment