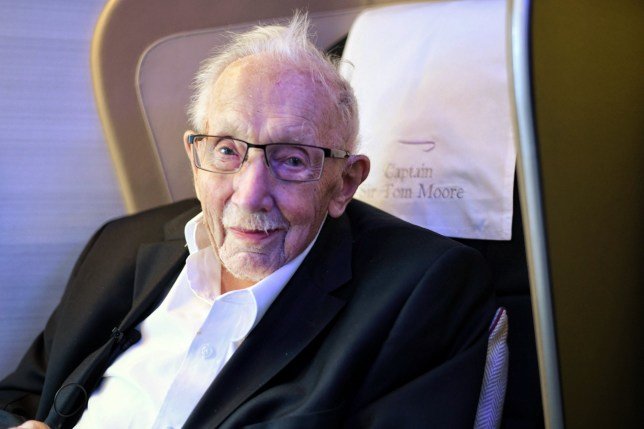 Captain Tom Moore has fulfilled another lifetime ambition by jetting off to Barbados, a destination on his bucket list.

The 100-year-old – who received a knighthood after raising £33 million for the NHS – is currently onboard a plane bound for the Caribbean island.

He travelled in style, wearing a smart suit and lying back on a headrest cover emblazoned with his name.

A Twitter account managed on behalf of the Second World War veteran, which has more than 325,000 followers, posted a picture of him sitting on an aircraft smiling this afternoon.

It was accompanied by a message from Sir Tom which said: ‘I never thought that, at the age of 100, I would get to travel again. I’m so grateful to everyone who has made this possible.

‘The support I have been shown in 2020 has given me renewed energy and today I get to tick something off my bucket list.’

A second message thanked British Airways and Visit Barbados for organising the trip. 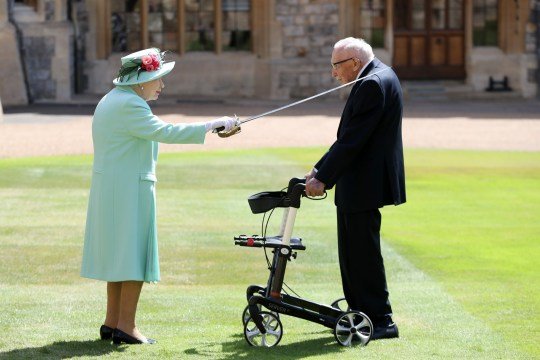 Responding to Sir Tom’s tweet, BA said: ‘Amazing to see Captain Tom! So glad we could make this happen for you and we’re pleased to have you on board. Have an amazing time in Barbados! Very well deserved. Thanks for all of your efforts!’

Delighted followers wished him a wonderful holiday, tweeting how Captain Tom was not only a national treasure but a ‘world treasure’.

One person wrote: ‘Enjoy your well earned break Captain Tom, you deserve it, you kept our spirits up and our hope alive, in very dark days thank you Sir. I wish you and your family a very Merry Christmas.’ 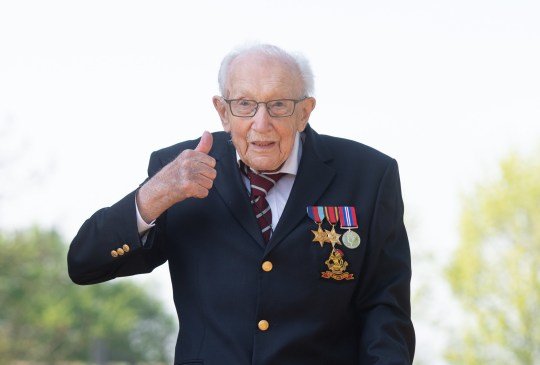 Another added: ‘You deserve this Captain Tom you are an inspiration to us all in a year that has shown us who true heroes are. Enjoy every moment Sir.’

Captain Tom revealed in September how he would love to visit the paradise island as well as return to India and travel along the world-famous Route 66. 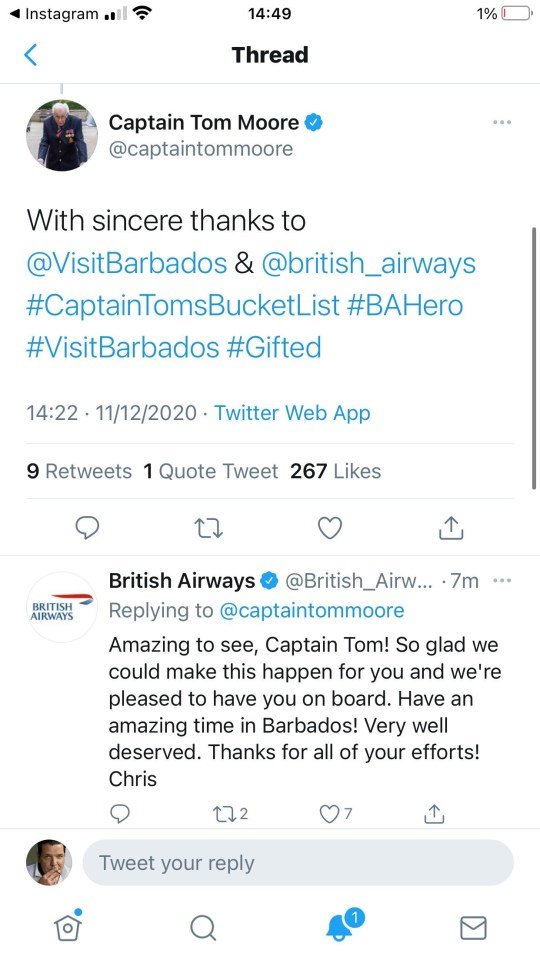 His holiday comes days after he took to the stage with singer Michael Ball for a tear-jerking rendition of You’ll Never Walk Alone on Wednesday night, leaving viewers of the Royal Variety Performance emotional.

And it seems he has no plans to relax in the new year, with the fundraising hero eyeing up replacing Daniel Craig as the next James Bond.

His own life story will be told on the silver screen – with Sir Tom tipping Michael Caine or Anthony Hopkins for the starring role.