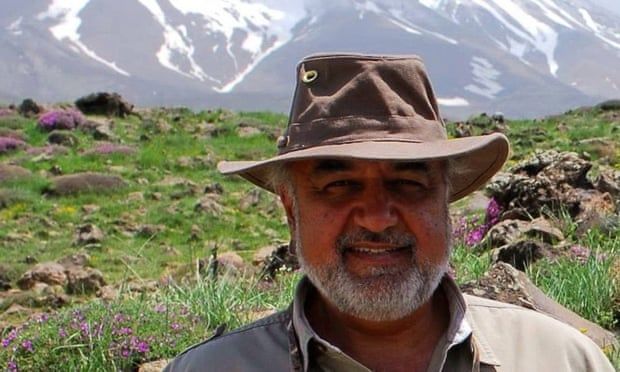 Conservationist detained since 2018 left behind when Nazanin Zaghari-Ratcliffe and Anoosheh Ashoori released
Morad Tahbaz, the British-Iranian-American citizen left behind last week when Nazanin Zaghari-Ratcliffe and Anoosheh Ashoori were allowed to return home to the UK, has been taken from Evin prison to a hotel in Tehran after representations by the British and American governments, the Foreign Office has said.

The department added that it was lobbying the Iranian authorities at the highest levels to allow him to return to his Tehran home immediately as the Iranian government had previously committed to do.

Tahbaz was taken from prison last week and allowed to stay at his home in Tehran with his wife for only two days before being returned to prison. The Foreign Office had been told by the Iranians he had only been sent back to jail to have an ankle tag fitted, but he was then kept in prison over the weekend leading to him, according to his family, to decide to launch a hunger strike in protest at his treatment.

Tahbaz is a tri-national with US, Iranian and British citizenship and the Foreign Office said it was working with the US to secure his permanent release. It said last week it had only been able to persuade the Iranians to let him go on indefinite furlough to his family home in Tehran, but could not persuade Iranian officials to allow him to join the other British dual nationals on the flight back to the UK.

This latest development – a transfer from prison to a hotel – suggests some of the pressure on the Iranian government, including from his family outside Iran, has had some impact.

But the family remains deeply unhappy at the way he is being treated. They accused the Foreign Office of abandoning him in order to secure the release of Zaghari-Ratcliffe and Ashoori, and revealed that Morad’s 93-year-old mother was taken to hospital on Saturday.

His sister Tarane Tahbaz said: “He was released for 10 hours, then 24 hours, before it ended after 48 hours. I am afraid the Foreign Office wanted him out of the way for 48 hours so they could secure their wonderful photo op.”

Morad’s sister said she had briefly seen video images of her brother on an iPhone: “He was barely recognisable, since he has lost 40kg. I only knew it was him when he waved and smiled.”

Tahbaz, a conservationist, was arrested in January 2018 along with eight other members of the Persian Wildlife Heritage Foundation.

Tarane said: “We were advised by the Foreign Office that the less noise we made, the better it would be for him and his release, so for four years we were told he would be part of the deal if and when it were to be made. It was only after Anoosheh and Nazanin were to be released – about which we are ecstatic – that we found out he was to be left behind. We are very grateful that Nazanin is still lobbying for us now that she is out.”

She also disclosed that her 93-year-old mother, Hamideh, had to be taken to hospital on Saturday night because “she had a complete meltdown. Morad’s incarceration has been a terrible blow to her. She really wants to stay alive just to see him.

“It was such a shock when he was first arrested. We thought it was a mistake, but when they were given terrible prison sentences, we did not know what to do.”

Separately, Ashoori’s wife, Sherry Izadi, thanked Guardian readers for raising money to pay for a sudden £27,000 fine imposed on them by the Iranian government as part of his release. The family had to go heavily into debt to raise the money.

Within 12 hours of launching a crowdfunding website publicised by the Guardian, the money was raised. Izadi said: “We are absolutely overwhelmed by the public’s generosity and the hundreds of messages of support and sympathy we have received. These acts of kindness have restored our faith in humanity. We are also hugely grateful to the Guardian, who helped us raise this cash in such a short period of time.

“We mark the first day of spring and the start of the Iranian new year with renewed hope and a firm resolve to help reunite the remaining detainees with their loved ones.”
Add Comment