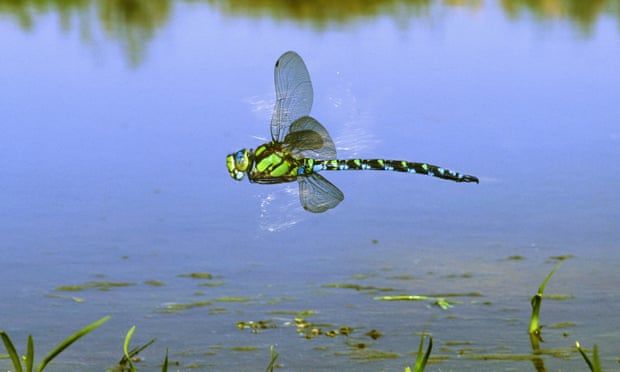 Six new species of dragonfly have colonised Britain in the last 25 years as dragonflies and damselflies boom in a warming climate.

More than 40% of resident and regular migrant dragonflies and damselflies have increased in number since 1970 with just 11% declining, according to a study of 1.4m dragonfly records.

Thriving species include the black-tailed skimmer and the brilliant metallic blue-and-green emperor dragonfly, Britain’s biggest species, which has increased more than any other, flying north and west into Scotland and Ireland this century.

Among the new colonists are the red-veined darter, the willow emerald damselfly and the southern migrant hawker, a large, powerful flyer which crossed the Channel and was first observed laying eggs here in 2010.

Another species is a returnee: the dainty damselfly was wiped out by the coastal floods of 1953 but successfully found its way back to the Isle of Sheppey and the Kent coastline a decade ago.

Experts said that global heating was helping cold-blooded dragonflies move northwards as the suitable “climate envelope” in which they can survive shifts north too.

Dave Smallshire, co-editor of the State of Dragonflies in Britain and Ireland 2021 report, said improvements in water quality and the restoration of wetland habitats may be a factor in some increases as well.

“Given the extreme high temperatures that we’ve been getting, dragonflies have had what’s needed to drive them north and north-westwards,” said Smallshire. 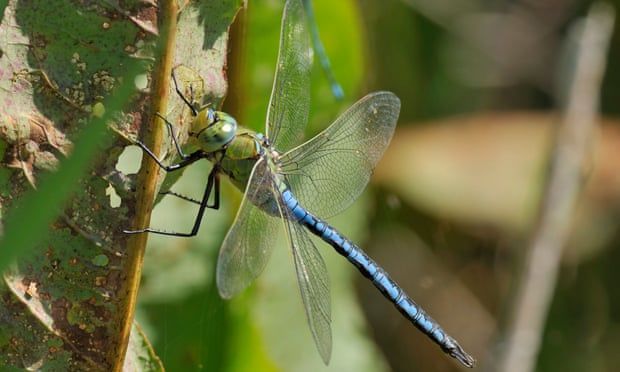 “Habitat changes may be a factor too. In some cases we’ve created big reservoirs and new lakes, and there may be more garden ponds than there were. After lots of major drainage of wetlands over 200 years, more recently we’ve seen large-scale wetland reversion such as the Great Fen in Cambridgeshire, the Avalon Marshes in Somerset and the Flow Country in Scotland.”

The study, which is published by the British Dragonfly Society, used sightings data gathered by 17,000 volunteers since 1970 of the 46 residents and regular migrants and ten rare vagrants on the current British and Irish list. Nineteen species have increased while just five have declined, according to analysis by the Centre for Hydrology and Ecology.

Smallshire said that there was also encouraging evidence that wetlands engineered by returning beavers to river valleys is helping dragonflies too. At an experimental site in west Devon, the wetland created by beavers damming a small stream saw the arrival of the small red damselfly, which was not found for tens of kilometres either side of the site and is not known for its long-distance flight.

Many dragonflies are capable of long-distance flight and warmer weather is likely to encourage other continental species to appear in Britain or establish themselves as residents in the near future. The winter damselfly unusually overwinters as a fully-grown adult (rather than a nymph in a pond) and one has already turned up in a porch in south Wales.

Another future visitor could be the violet dropwing, a spectacularly coloured African species which has colonised the Iberian peninsula and has now crossed into south-west France.

“It’s not insurmountable in weather like we’re currently experiencing that these things could come wandering across on a southerly air flume,” said Smallshire. “They might not all colonise but they could turn up unexpectedly.”

But more extreme weather conditions is not good news for all dragonflies, with hotter weather likely to push declining species such as the common hawker and the black darter farther north.

“The so-called common hawker should be called the moorland hawker because it is most common on the blanket bogs in the north of Britain,” said Smallshire. “We should be most concerned about these and we need to keep an eye on them. It is harder to get evidence of species disappearing than to spot new species turning up.”