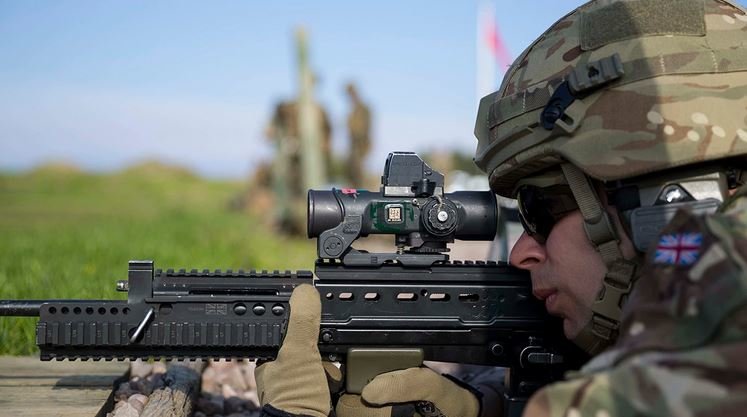 The chief of the Defence Staff says key changes backed by the concept include improved integration of effort across government and with allies, equipment modernization, and constant competition with adversaries below the threshold of war.
The British military and government must “fundamentally change” the way they counter the political and military ambitions of authoritarian rivals, or risk being overwhelmed, warned the country’s top soldier.

Gen. Nick Carter’s speech at the Policy Exchange think tank Sept. 30 coincided with the publication of Britain’s new “Integrated Operating Concept.” The chief of the Defence Staff said key changes backed by the concept include improved integration of effort across government and with allies, equipment modernization, and constant competition with adversaries below the threshold of war.

The concept says the strategy rethink “represents the most significant change in UK military thought in several generations. It will lead to a fundamental transformation in the military instrument and the way it is used.”

Carter said one of the “big ideas” in the operational concept was that it makes a distinction between “operating” and “war fighting."

“In an era of persistent competition, our deterrent posture needs to be more dynamically managed and modulated. This concept therefore introduces a fifth 'C' — that of competition — to the traditional deterrence model of comprehension, credibility, capability and communication,” he said.

“This recognizes the need to compete below the threshold of war in order to deter war, and to prevent one’s adversaries from achieving their objectives in fait accompli strategies, as we have seen in the Crimea, Ukraine, Libya and further afield.

“Competing involves a campaign posture that includes continuous operating on our terms and in places of our choosing.

Carter also identified the nature of the growing threat driving Britain to rethink its strategy.

“Our authoritarian rivals see the strategic context as a continuous struggle in which nonmilitary and military instruments are used unconstrained by any distinction between peace and war.

These regimes believe that they are already engaged in an intense form of conflict that is predominantly political rather than kinetic,” he said. “Their way of warfare is strategic, it is synchronized and systematic, and our response must be too.”

The new concept comes ahead of the government’s Integrated Defence Review, expected in the second half of November. The review is planned to bring together British policy thinking across defense, security, foreign policy and overseas development spending.

Government ministers and advisers previously signaled the review would see the military effort pivot away from conventional military capabilities and move toward a greater focus on space, cyberspace and artificial intelligence.

Carter’s speech and the new strategy document are the best evidence to date of where the government’s plan for change is heading.

“We must chart a direction of travel from an industrial age of platforms to an information age of systems,” Carter said. “Some industrial-age capabilities will increasingly have to meet their sunset to create the space for capabilities needed for sunrise. The trick is how you find a path through the night. We know this will require us to embrace combinations of information-centric technologies. But predicting these combinations will be challenging."

The concept identified some capabilities it expects will be in demand in the future, including smaller and faster capabilities to avoid detection; trading reduced physical protection for increased mobility; an increasing dependence on electronic warfare; stealth technology; and evermore sophisticated networks of systems.

Carter made no mention of how the cash-strapped country will find the resources for a strategy rethink that requires substantial spending in sectors like space and cyberspace. Analysts here reckon the early disuse of conventional capabilities, like much of the main battle tank force, may be one way of balancing the books.

Last week, the Ministry of Defence confirmed it is considering cutting an order to buy five Boeing Wedgetail command-and-control aircraft to three platforms as part of its cost-cutting effort. Completion of the new aircraft expected around 2030.

The new operating concept document said it’s impossible to immediately abandon the current force structure and create a bespoke one from scratch, noting that important operations must continue and that legacy programs and platforms should retain utility.

Carter reinforced that message, saying it is “important to emphasize that the willingness to commit decisively hard capability with the credibility to war fight is an essential part of the ability to operate and therefore of deterrence.”
Add Comment