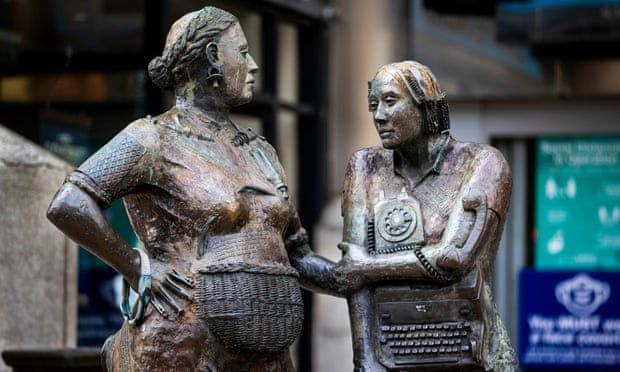 Britain thinks it has won the gender equality war. That's a bad sign

Progress can often be its own worst enemy. After a month in which the nation’s attention was diverted towards the inadequate understanding of the dangers women face from sexual predators, a new survey by King’s College London on perceptions of inequality reveals that the UK is exceptional among similar nations in its attitudes towards gender inequality.

In short, the British seem to have relegated gender inequality to the consigned-to-the-past category, with only 23% of those surveyed considering it a top concern. In this the British are an anomaly, diverging clearly from other European countries and sitting closer to nations such as China, where respondents posted similarly low levels of concern about female inequality. In fact, among the 28 countries surveyed, Britain and Hungary were the lowest-ranking western countries.

A general profile of the UK emerges through the rest of the attitudes it registers about inequality overall. Britain is highly concerned about disparities in income and wealth, and especially when they fall along geographical lines. Britain also posts relatively high anxiety about racial and ethnic inequality – much higher than the European average – which seems to be at odds with the generally hostile environment towards racial justice campaigners since the Black Lives Matter protests last summer.

The picture seems to be of a country where there is a robust desire for social justice and a good grasp of its current contours of inequality – except when it comes to gender, which is only a few points above Britain’s lowest concern of all: inequalities between generations.

The low ranking may be down to a cultural bias that overemphasises technical progress, such as legislation. It is common, when groups secure landmark rights – marriage for gay people, for example – for perceptions of the legitimacy of their remaining grievances to harden. “The struggle for gay rights is over,” wrote James Kirchick in the Atlantic in 2019. “For those born into a form of adversity, sometimes the hardest thing to do is admitting that they’ve won.” In the same breath he goes on to say that “for many gays and lesbians” coming out comes with risks of banishment, violence and elevated rates of suicide. These things are less significant for him, though, than the fact that “trends are moving in the right direction”.

This direction-of-travel analysis is one that women run into often. The landmark fights have been won in the UK, from equal pay to statutory maternity leave. Indeed, some would argue that diversity initiatives have enabled women to overtake men. And Britain does indeed rank highly in the gender equality index. But here is where some progress, or even a lot of progress, breeds complacency.

After a year in which a pandemic has thrown more women than men out of the labour market, hit non-university-educated women’s jobs harder, pushed women to take on more unpaid care and domestic duties, and in many cases “retraditionalised” work, such low levels of concern suggest a country that is heading into a post-pandemic gender inequality crisis. We may come to realise how our progress is in fact fragile and erected on subterranean inequalities that surface quickly under stress. In sport, for example, women’s activities were shut down first under a government designation of “non-elite”. Sportswomen then suffered sharp drops in income because, unlike men, they are paid on a match-fee basis and had to pay for their own fitness equipment during lockdown.

The unusual laxity on gender inequality may also be a feature of Britain’s tendency to view itself in terms of relative status. I am reminded of a moment that precipitated an embarrassing national display of defensiveness. In 2014, the UN special rapporteur on violence against women, Rashida Manjoo, made the (not unreasonable) observation that Britain has an in-your-face “boys’ club sexist culture” that led to negative perceptions about women and girls. She added that in the UK there was “a more visible presence of sexist portrayals of women and girls” and a “marketisation’” of their bodies.

Instead of listening and reflecting, there was indignation that Britain could be called out and insulted on such a global scale. The debate immediately veered into whether Britain was “the most sexist country in the world”, something Manjoo never asserted, and the inevitable comparisons with other countries where things were clearly worse began. The former Tory minister Edwina Currie asked: “Why can’t she go to a country where women can’t drive cars, or have maternity leave?” It seemed that we could only engage with Britain’s gender issues insofar as they were relevant to some international pecking order that Britain was, naturally, at the top of.

In general, the King’s College report observed, British people were “much less likely to pick out inequality between men and women as a serious problem compared with other countries”; and countries that ranked higher than the UK in terms of gender equality still recorded higher levels of concern about gender issues. The link between Britain’s perception of itself in this regard and reality is seemingly as broken as it is in Saudi Arabia. We are much closer than we would like to think to countries where until recently women couldn’t drive. If we continue to congratulate ourselves on how far we have come, we can guarantee not only that progress will stall, but that ultimately it will be reversed.