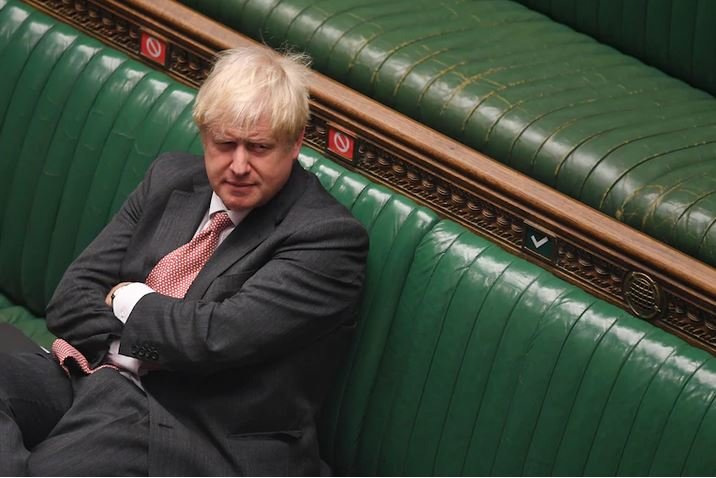 Britain’s government pretends it can do no wrong. Even in its official history.

Britain is adrift. Yesterday evening, the British government proceeded with its threat to breach international law by overriding the protocol on Northern Ireland it had agreed with the European Union.

This protocol, signed only last January, was designed to protect the fragile peace process by preventing the return of a hard border on the island of Ireland. The bill passed its first reading with a majority of 77. Time and again, Brexit Britain shows it is adamant at going alone, whatever the cost.

In the midst of the first wave of covid-19, it even refused to participate in the European plan to procure medical equipment. Doctors and nurses had to make their own PPE out of trash bags.

Britain’s current isolationism bewilders its allies — but it is not accidental. This stance is linked to a distorted view of its glorious past and inborn genius that became the official history of the government in 2013, three years before the nation narrowly voted to leave the European Union.

The “long and illustrious history” is set out in the official book “Life in the UK.” It was launched by Theresa May, then the Conservative home secretary, who would later become prime minister, and has been “approved by ministers” ever since. It presents a Britain that is never wrong, almost always White and never needs international partners.

The rewriting of the national past gives us a worrying window on how Britain sees itself and its place in the world. But it isn’t only symbolic: The official history is required reading for about 100,000 people every year who are applying for citizenship or settlement. Migrants have to read and remember the information, which is then tested in a multiple-choice computer exam.

So distorted is this official account that more than 600 historians are asking for it to be scrapped until there has been a proper review. (I helped organize the petition.) The criticism focuses on the airbrushing of slavery and colonial violence.

The handbook, for example, tells new citizens that slavery within the British Isles was “illegal” by the 18th century and purely an overseas operation; in fact, judges debated the issue, and enslaved people within Britain were openly advertised for sale in newspapers in the 18th century.

The unwinding of Britain’s vast colonial project is summed up as “for the most part, an orderly transition.” But that ignores the chaos and violence in many places, such as the partition of India in 1947 and the extrajudicial killings in the Mau Mau Rebellion in Kenya from 1952 to 1960.

These are not accidental mistakes. They are part of a consistent pattern of deliberate cuts and rewriting. Comparison with earlier editions published under the previous Labour governments shows that migrants used to be taught that enslaved people died in the Middle Passage. In the current version, they are only “traveling in horrible conditions,” an unfortunate wording given that about 400,000 of them died on board British ships.

A previous description of the slave trade as “evil” was cut, as was the fact that Liverpool and Bristol profited handsomely from it. In the page on the American Revolution, the British Parliament no longer “refused” to compromise with the Americans (correct) but “tried to compromise” (false).

Ireland falls victim to similar revisionism. Instead of colonizing Ulster by force in the early 17th century, James I now merely “encouraged” English and Scottish Protestants to settle there.

The great famine of 1846 is still mentioned, but the fact that Britain might have done more to help the Irish has been excised. The deployment of the British army in Northern Ireland after 1969 vanishes altogether. This willful blindness to Ireland’s past might explain how the British government can play so casually today with its future.

Any mistake or sign of national weakness is stripped from the record. Appeasement in 1938 cannot be mentioned — even though this means Winston Churchill can no longer be celebrated for opposing it. Adolf Hitler’s invasion of Czechoslovakia becomes merely “testing Germany’s military strength in nearby countries.”

Nor is there room for ambivalence or regret. When the bombing of Hiroshima and Nagasaki is mentioned, you are not told about the many civilian victims but that “scientists led by New Zealand-born Ernest Rutherford, working at Manchester and then Cambridge University, were the first to ‘split the atom.’ Some British scientists went on to take part in the Manhattan Project in the United States, which developed the atomic bomb. The war was finally over.”

One can read this official history as an Anglo-Saxon fantasy of Britain after Brexit — one where, if people of non-European descent feature at all, they do so only as faceless migrants. They are almost never part of British society. Africans and people who escaped slavery and lived in 18th-century Britain have been deleted.

Among more than 200 personalities one needs to remember, the only people who are not White are a handful of athletes, the architect Zaha Hadid and Sake Dean Mohamet, a co-founder of England’s first curry house in 1810.

The Home Office (essentially, Britain’s Department of Homeland Security) has been so scrupulous in taking out race that it even cut the previous reference to Hitler’s “racist ideology.” In its place, migrants are now told that “he believed that the conditions imposed on Germany by the Allies after the First World War were unfair; he also wanted to conquer more land for the German people.”

That is it. There is plenty about the Second World War, studded with famous quotes from Churchill, but you would not know it was a war of extermination. In more than 180 pages, the Holocaust is not mentioned once. And this in a text that is meant to prepare people for life in the United Kingdom today, at a time of growing concern about anti-Semitism.

The British government trumpets its vision of a new “Global Britain” and dreams of striking quick free-trade deals with the United States and other countries around the world. But judging by this official text, it fundamentally misunderstands what international exchange is about. The list of inventions that “Britain has given the world” includes insulin, DNA, MRI and the World Wide Web, all of which had international collaborators or were developed in labs in Toronto and Geneva.

Only in Britain are you asked to remember Francis Crick without James Watson, his American co-discoverer. Britain always gives to the world, never takes. Even D-Day, according to an official practice question, was the “British invasion of Europe,” not an Allied effort led by U.S. Gen. Dwight D. Eisenhower. This hardly bodes well for Britain’s “special relationship” with the United States.

When the statue of the slave trader Edward Colston was toppled in Bristol in June, Prime Minister Boris Johnson tweeted that “we cannot now try to edit or censor our past.” In its own official history, this is precisely what his government is doing.