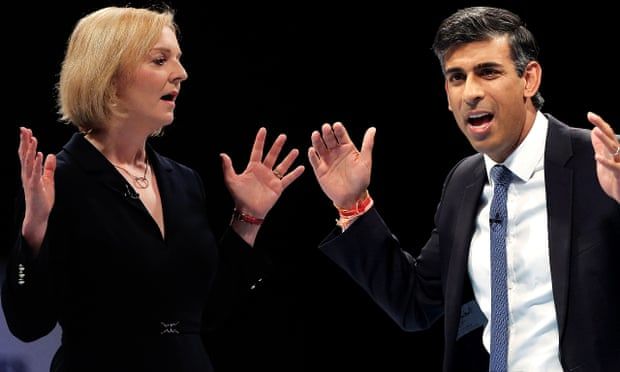 Heaping pressure on incoming prime minister, 10-year government bond yields shoot up to 2.78%
Fears of a long recession and the likelihood of higher public spending to cope with the cost of living crisis have sent the interest rate on Britain’s debts soaring towards its biggest monthly rise in almost 40 years.

Ten-year UK government bond yields, which are a proxy for the effective interest rate on public borrowing, hit 2.78% to register the biggest monthly rise since September 1986.

Heaping pressure on the incoming prime minister to address the Treasury’s worsening financial outlook, some analysts predicted the yield would increase before the end of the year to at least 3%.

It comes as Rishi Sunak said there were growing risks of financial markets losing faith in the British economy amid soaring inflation and elevated levels of government debt, in an attack on his Conservative leadership rival Liz Truss’s tax and spending plans.

About a third of the UK’s total borrowings have an interest rate linked to inflation, making them more expensive to finance in a period of rising prices.

Truss, the frontrunner in the race to succeed Boris Johnson, has been criticised by opposition parties for proposing £50bn worth of tax cuts that will boost the incomes of rich and poor households and profitable companies over the next year.

Sunak said he “struggled to see” how sweeping tax cuts to support families with the cost of living crisis “add up”. Using an interview in the Financial Times, he warned it would be “complacent and irresponsible” to ignore the risk of losing financial market confidence in Britain.

“We have more inflation-linked debt by a margin than any other G7 economy – basically more than double,” he said.

Analysts at UBS said the number of investors willing to lend to the UK government was likely to begin drying up, helping to push the 10-year gilt yield above 3%.

The pressure on the government’s borrowing position comes as European and US bond yields also increased, with the 10-year US Treasury bond already at 3.11%.

However, while this increase in Washington’s borrowing costs has failed to dent confidence in the longer-term prospects for the world’s largest economy, keeping the value of the dollar near record highs, the pound has fallen sharply to levels seen after the Brexit vote six years ago.

Sterling has dropped by 5% against the dollar to $1.20 and 3% against the euro this month in response to clear signs that Britain’s economy will suffer more than rival industrialised nations coping with soaring gas and electricity prices and weakening private sector activity.

The prospect of a rise in borrowing costs when Bank of England policymakers meet to set interest rates in September, even as the economy enters a prolonged recession, has also contributed to sterling having its worst month since late 2016 against the dollar and its worst versus the euro since mid-2021.

Speeches by central bankers at the annual Jackson Hole conference in the US last week stoked concerns among financial market investors that interest rates would need to rise further to quell inflationary pressures, despite forecasts of a recession in most developed economies.

Azad Zangana, a senior European economist at the investment manager Schroders, said: “A definitive regime shift has occurred, taking us into a new era. More seasoned investors may see this as a return to more normal times, akin to the period before the global financial crisis in 2008.

“However, that is yet to be seen. It could be that the stagflation – a period of persistently high inflation combined with high unemployment and stagnant demand – experienced in the late 1970s and early 1980s may be the more appropriate comparison.”

Financial markets are pricing in a 40% probability that the Bank will raise interest rates by 0.75 percentage points to 2.5% next month, which would be its largest single increase in borrowing costs since 1989. Investors expect rates could reach 4.25% by the middle of next year.

British consumer price inflation hit 10.1% for the first time in 40 years in July, and the Bank has forecast that CPI will exceed 13% in October, when regulated household energy prices are due to rise by 80%.

Goldman Sachs forecasted on Monday that British inflation could reach 22% early next year, if natural gas prices hold near current levels. The Bank and many other forecasters expect higher inflation will push Britain’s economy into a lengthy recession later this year.

An Office for National Statistics assessment of the impact on inflation from government energy bill rebates for households found they could not be viewed as lowering inflation.

Analysts at Bloomberg had estimated that a verdict to decrease inflation would have saved the UK government as much as £14bn from the cost of financing index-linked government bonds.
#Boris Johnson  #Johnson
Add Comment