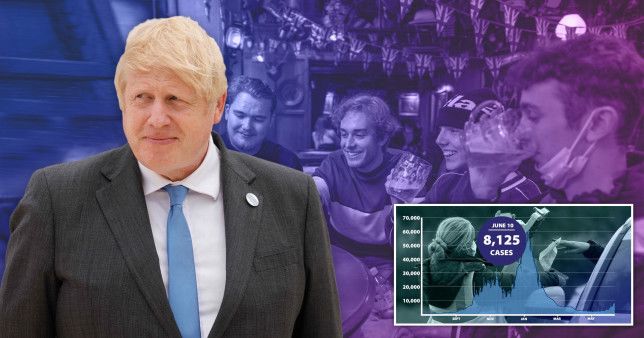 Boris Johnson will delay the full lifting of lockdown on June 21 by almost a month, according to government sources.

The PM is reportedly planning to push back ‘Freedom Day’ to July 19 amid a surge in cases of the Indian variant.

Under the roadmap out of lockdown, it was hoped all restrictions could be lifted by June 21.

But multiple sources told The Sun the chances of this happening were close to zero after cases of the Indian strain tripled in a week.

Officials said they would rather delay the big day than be forced into a u-turn and have to reintroduce restrictions.

One source said: ‘The last thing they need is a hokey cokey of in out, in out of restrictions.

‘No one wants to go backwards, and we have to get this right first go.’ 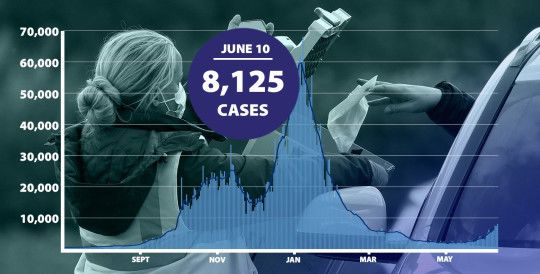 The UK reported the highest daily cases since February after 8,000 people tested positive

Under plans to be announced on Monday, a two-week review will be included meaning restrictions could be dropped on 5 July if hospitalisations stay down.

If not, the situation will be looked at again in two weeks time.

The delay will be used to work out if the vaccine rollout is stopping rising cases from translating into a surge in hospital admissions.

It will also allow millions more people to be double jabbed and therefore better protected against the strain that first emerged in India.

The Delta variant, as it is also known, has a 60% increased risk of household transmission compared to the previously-dominant Kent strain.

Research suggests the latest variant more than doubles the risk of hospitalisation.

However, patient numbers have grown at a much slower pace than cases – suggesting the vaccines are working to save lives and ward off serious illness.


More than half of the 42 deaths due to the Indian mutation were in unvaccinated Brits.

While one dose provides some protection, the vaccine has greater efficacy after two doses.

Downing Street has publicly insisted that no final decision has been made over the June 21 lockdown.

But key figures told The Sun any chance of a full reopening going ahead in two weeks time are ‘hanging by a very, very, very thin thread’.

It was previously reported that the PM could take a mix and match approach, allowing big weddings to go ahead but keeping social distancing in place and night clubs shut.

The latest development comes after top doctors warned the PM to push back the June 21 plan to allow more people to get vaccinated.

The BMA said that even though hospitaliation numbers are low, cases are sreading among young people who are known to suffer worse from long Covid.

Dr Chaand Nagpaul, chair of the British Medical Association, said: ‘Case numbers are now rising rapidly, and we know that those who are unvaccinated or have had only one dose of the vaccine remain vulnerable to getting the virus.

‘The best protection is only achieved at about two weeks after the second dose, particularly with the Delta variant, and we will not have enough of the population properly protected by June 21.’