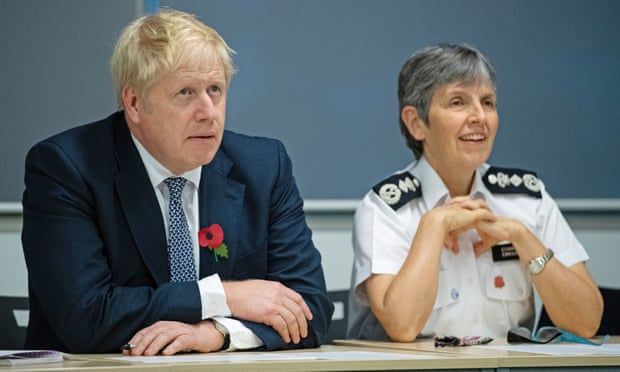 Boris Johnson is under increasing pressure to stay out of the process to select the new head of the Metropolitan police, given that the force is currently investigating whether he and others in Downing Street broke lockdown laws.

Opposition parties said the idea of Johnson influencing the choice would be a serious breach of ethical standards because Cressida Dick’s successor will have ultimate responsibility for an inquiry that could see the prime minister fined, and potentially forced from office.

No 10 stressed the prime minister has no official role in choosing the Met commissioner. The final decision is made by Priti Patel, the home secretary.

However, Patel is a close ally of Johnson, who kept her in post despite a formal investigation finding evidence that she had bullied civil servants.

Angela Rayner, Labour’s deputy leader, expressed alarm after an unnamed “senior ally” of Johnson was quoted by the Times as saying police should be extremely wary about making a decision that could lead to the PM being toppled.

“This raises very serious questions about both the rule of law and
basic standards of government,” she said.

“If the prime minister and his allies are going to publicly lean on the police to try to get him off the hook for an offence, he cannot then get involved in appointing a commissioner who would decide whether to charge him.

“The government should make clear that no one under investigation will be involved in any way, and the prime minister must say now if he will recuse himself or explain how public confidence will be maintained in a fair process.”

Sir Bob Neill, a senior Tory MP and chair of the Commons justice committee, said suggestions of political pressures on the Met were “completely inappropriate” and should be disowned by No 10.

The Liberal Democrats have argued that, given the circumstances, a replacement should be endorsed instead by the cross-party Commons home affairs committee.

Brian Paddick, a former senior Met officer who is now a Lib Dem peer, said the only certain way to keep the process fair would be if Johnson was no longer prime minister.

“It is inconceivable anyone will be appointed as commissioner of the Met without the approval of the PM,” Paddick said. “When you have a PM under criminal investigation, that is very problematic. I’m unconvinced that the PM giving his personal assurance that he will take no part will reassure the public.”

Dick stepped down on Thursday after the London mayor, Sadiq Khan, made it clear she had lost his confidence following a series of scandals highlighting an apparently misogynistic and racist culture within elements of the force.

Fresh revelations emerged on Friday, with two serving officers and a former officer referred for potential prosecution over allegations they swapped misogynistic and racist messages in a WhatsApp group with Sarah Everard’s murderer, Wayne Couzens,

The National Black Police Association praised Dick’s long years of service but labelled her a block to meaningful reform. Insp Andy George, the association’s president, said it remained extremely difficult to report inappropriate behaviour in the Met, calling Dick “the most defensive and dismissive leader” he had encountered in the police.

“The vast majority of police officers put on their uniform and do their best to protect the public,” said George, “but time and again we have seen a culture of fear within the [Met] – a fear of challenging inappropriate behaviour, and even when that behaviour is challenged, it is rarely dealt with robustly.

“Defending the indefensible and failing to tackle the widespread issues of racism, misogyny and bullying allows bullies and poor behaviour to thrive and does a disservice to the many hardworking police officers across London and the UK.”

While Patel had no advance notice of Dick’s decision to quit, and had appointed her to an extended two-year term only in September, she made it clear on Friday that she also sought a new approach at the helm of the Met.

Writing in London’s Evening Standard newspaper, the home secretary said it was “clear that strong and decisive new leadership will be required to restore public confidence in our largest police force”.

She added: “Policing culture and conduct have rightly come under scrutiny. Be in no doubt that a new leader must tackle these institutional issues.”

Separately, it emerged on Friday that the Met initially declined in December last year to investigate widespread reports of illicit social gatherings in and around Downing Street in part because no one had admitted them and there was no footage on social media.

The details emerged in a document connected to a challenge to the decision not to investigate by the legal campaign group the Good Law Project, which is seeking a judicial review of the Met’s decision and reasoning. A document from the police force’s lawyers, in response to the claim, pointed to guidelines saying it did not investigate Covid breaches retrospectively, given their relatively minor nature and limited resources.

At the time the first decision was made, any details about the gatherings were “fairly vague”, the document said, detailing the reasons given by a senior officer, whose name had been redacted.

The officer, it said, “observed that the press reports did not identify who had been at the gatherings, no one had come forward to admit presence at any of the gatherings, and there was no evidence from social media showing these gatherings taking place, and from which those present could be identified”.

The decision was reversed in late January. On Wednesday the Met said more than 50 people in Downing Street and Whitehall, expected to include Johnson and his wife, Carrie, would be sent legal questionnaires about the alleged social events.