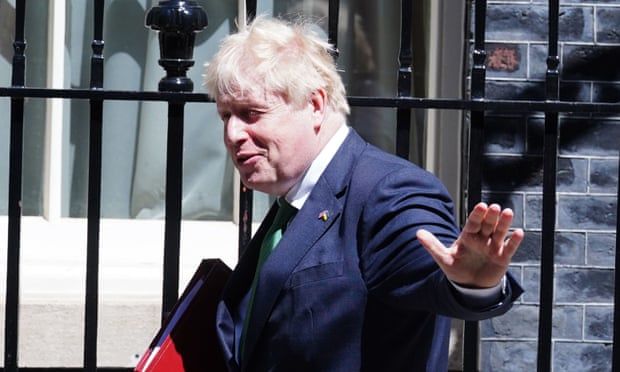 Opponents condemn ‘hot air and waffle’ in planned speech amid reports that people will be able to use housing benefit to buy homes
Boris Johnson will try to reset his beleaguered premiership on Thursday with a speech on housing and the cost of living that was condemned by opponents as “hot air and waffle” and rehashed policies, rather than a genuine attempt to tackle the crises.

As petrol prices saw their biggest daily jump in 17 years and Britain was warned its economy could be hit more by the Ukraine war than any other major country, the prime minister was expected to mainly promise concrete plans in the coming weeks.

Advance extracts of the speech released by Downing Street saw Johnson promise to “use our fiscal firepower” to help struggling households, but contained no specifics beyond broad pledges of cost-saving policies still being prepared.

Reports said that the speech would outline measures to allow people to use benefits to help in securing a mortgage. The Times said he will argue that the £30bn in housing benefit that currently goes towards rent would be better spent in helping people become first-time buyers. However it remained unclear how this would help people on such low incomes with lenders increasingly concerned about affordability criteria amid the cost-of-living crisis.

Another anticipated proposal is the extension of the right-to-buy discount scheme for social tenants to those in housing association properties, an idea first raised in the 2015 Conservative manifesto and condemned as likely to make the housing crisis worse.

Another possibility is a relaunch of another existing housing idea, using cheap-to-build modular, “flat-pack” homes to increase supply. The speech was also set to cite the “ambition” to reform mortgage finance to make first-time house purchases easier.

Billed by No 10 as Johnson reassuring Britons he is “on their side”, the speech in Lancashire caps a political week which saw the prime minister gravely damaged on Monday when 148 of his MPs, more than 40% of the parliamentary party, sought to have him removed in a confidence vote.

Johnson and his allies have tried to present his victory – he was backed by 211 MPs – as drawing a line under the turbulent issue of illegal lockdown-breaking parties in Downing Street, and worries about a wider policy drift.

But the sense of ebbing prime ministerial authority has been reinforced by ministers making policy interventions outside their remits, with the health secretary, Sajid Javid, using broadcast interviews on Wednesday to call on the PM to “do more on tax cuts”.

In an increasingly bleak economic backdrop to the speech, a litre of petrol rose to an average of 180.73p, on the verge of breaking the £100 barrier for a tank of fuel for a 55-litre family car.

The Organisation for Economic Co-operation and Development thinktank, meanwhile, predicted that next year the UK would see zero economic growth, the worst anticipated rate among the G7 group of major industrialised nations.

In his speech, Johnson was to acknowledge what he termed “global headwinds”, but promised a route through the crisis, albeit with minimal immediate specifics.

“Over the next few weeks, the government will be setting out reforms to help people cut costs in every area of household expenditure, from food to energy to childcare to transport and housing,” he was to say.

“We will continue to use our fiscal firepower to help the country through tough times – and concentrating our help where we should, on those who need it most.”

On housing, experts warned that the right to buy extension would be counterproductive. The National Housing Federation, which represents affordable housing providers, has calculated there are 4.2 million people in need of social housing in England.

Toby Lloyd, who was Theresa May’s housing adviser in Downing Street when the same plan was dropped, said the resurrection of the idea seemed “like a political positioning statement in terms of headlines instead of a properly worked through policy”.

“Housing associations are not arms of the state,” said Lloyd. “This is not government property; it is not theirs to give away. We need more affordable and social housing not less, and in that context it seems to be particularly unwise to be getting rid of some of the stock we already have.”

Tulip Siddiq, the shadow economic secretary to the Treasury, said Johnson was out of ideas and appeared “unwilling to face the reality that economic growth in the UK will grind to a halt next year”.

She said: “This is a prime minister so deluded he thinks two fifths of his MPs declaring no confidence in him is a good result.”

Daisy Cooper, the Liberal Democrat deputy leader, said Johnson was “going on a jolly to spout more hot air and waffle rather than getting a grip on his government”.

She said: “Johnson’s government is broken. They have absolutely no idea how to help the millions of families struggling with soaring energy bills and sky-high inflation.”
#Boris Johnson  #Johnson
Add Comment