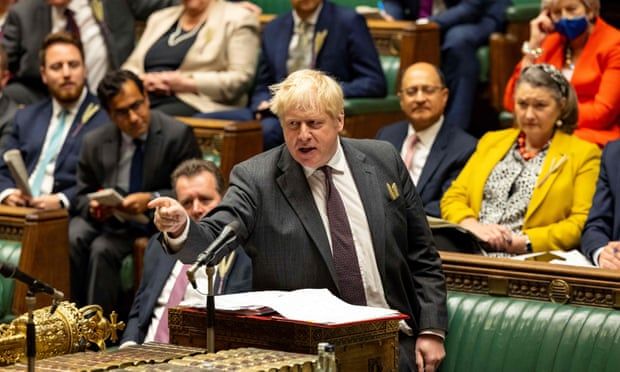 Boris Johnson’s most memorable PMQs – from Partygate to Pinocchio

Outgoing PM never relished being held to account at the dispatch box, as his frequent outbursts have shown

There is much that Boris Johnson will miss when he finally leaves Downing Street in September but having to face the weekly music at prime minister’s questions is unlikely to be on the list.

The PMQs experience has frequently been a bruising one for Johnson, who has never been keen on being held to account and much less subjected to the forensic questioning of an opposition leader who honed his interview techniques as former head of the Crown Prosecution Service.

Here are some of Johnson’s memorable moments at PMQs.

*  In his first PMQs, Johnson swore in parliament, describing Labour’s economic plans as “s**t or bust”. During a session, he called Jeremy Corbyn a “chlorinated chicken”, faced down a rousing speech and demands for an apology from Labour MP Tanmanjeet Singh Dhesi about Johnson’s “racist” comments and had to be stopped from leaving too early ahead of his own spending review.

*  Johnson grimaced his way through his first PMQs after he survived a bruising confidence vote in July as he was told he was “loathed” by his own party, called a “lame duck” and likened to Monty Python’s black knight who claimed his mortal injuries were just “flesh wounds” in the 1975 film Monty Python and the Holy Grail.

*  After the surprise resignations of cabinet ministers Rishi Sunak and Sajid Javid in June, Johnson bore the humiliation of being told 10 times in 30 minutes that he had to go. The Labour leader, Keir Starmer, told him he was haemorrhaging MPs so fast that it was like “sinking ships fleeing the rat” but the calls for his resignation didn’t come only from Labour MPs, with the most memorable line coming from the Conservative David Davis, who called for Johnson to do the “honourable thing” before it “becomes impossible for the government to do its proper job”.

*  Boris Johnson was put in his place by the Commons’ Speaker in November 2021 when he was told to sit down. “You may be the prime minister of this country but in this house, I’m in charge!” said Sir Lindsay Hoyle. “I’m not going to be challenged.” Johnson was attempting to avoid answering questions over former Tory MP Owen Paterson, a paid lobbyist for a company that won government contracts worth almost £600m without competition.

*  Johnson lost his temper four times in PMQs in April and said Starmer was out of his “tiny mind”. Johnson was rattled over questions about the Partygate scandal and claims he criticised the BBC over its coverage of the war in Ukraine. Johnson accused Starmer of being in a “Dr Who timewarp” and described Labour as being “intellectually bankrupt” but not before one SNP MP was told off for calling Johnson a “Pinocchio prime minister”.